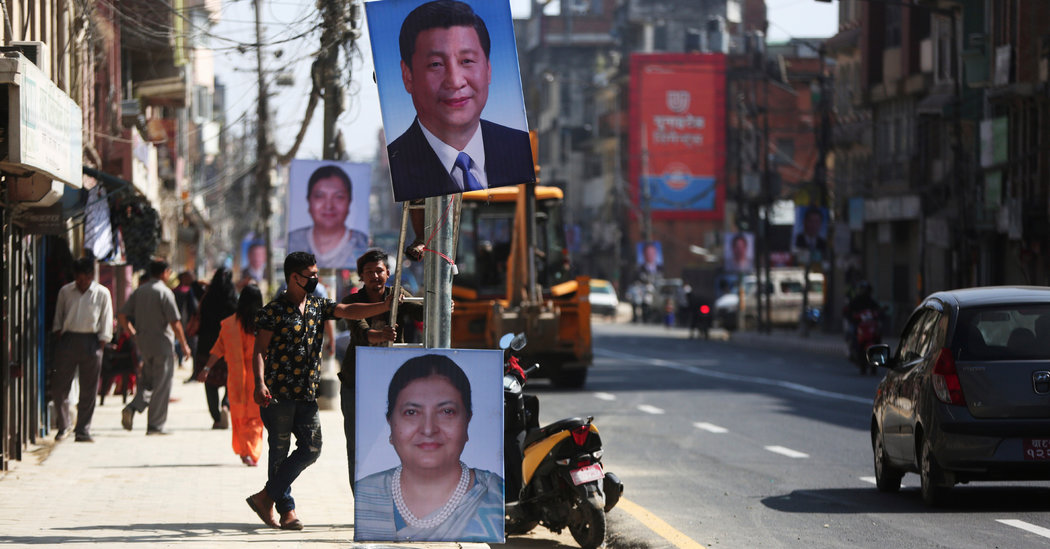 KATHMANDU, Nepal — Xi Jinping touched down in Nepal on Saturday, the first visit by a Chinese president to the country in more than two decades, underscoring Beijing’s increasing interest in South Asia as a strategic hub for defense and transit projects.

Though Nepal has traditionally been close to India, in recent years, Chinese investors have pumped millions of dollars into the country, one of Asia’s poorest and least-developed democracies. And under Prime Minister K.P. Sharma Oli, leader of the Nepal Communist Party, Nepal has tried to diversify its trade agreements and move away from dependence on India.

Nepal, which borders Tibet and northern India, is the chief candidate for a new trans-boundary railway under China’s Belt and Road Initiative that would link China to the subcontinent.

Constantino Xavier, a foreign policy fellow at Brookings India in New Delhi, said, “China is seeking to find a sweet spot: to increase its influence in Nepal without upsetting India’s security concerns in what used to be its predominant sphere of influence.”

The balance is tricky. China and India have historically jockeyed for influence in Nepal, and they share their own sources of tension. Lately, that has been over the disputed region of Kashmir, China’s Belt and Road agreements with Pakistan, and over a military standoff in a mountainous border area claimed by Bhutan.

In recent years, India’s relationship with Nepal has also suffered. In 2015, after Nepal released a new democratic Constitution following a bloody Maoist insurgency and decades of rule by monarchs, India unofficially imposed a monthslong blockade along the border.

The blockade, which many believed was retaliation by New Delhi for not having a bigger role in helping to draft Nepal’s Constitution, led to a humanitarian crisis. Trucks piled up on the India border. Nepal’s access to food, medicine and fuel was pinched off. Aid workers were unable to obtain crucial supplies to rebuild Nepal after devastating earthquakes that spring killed about 9,000 people and destroyed hundreds of thousands of homes.

Mr. Oli, who served as prime minister during that period, was re-elected in 2017 under a banner of nationalism and a party vow to increase business with China. China, at the same time, has aggressively courted closer relationships with Nepal and other countries traditionally in India’s sphere of influence, including Sri Lanka and the Maldives.

Rajan Bhattarai, a foreign affairs adviser to Mr. Oli, said that in addition to the railway project, Nepal expected to sign deals with China that could transform the entire Himalayan region by revamping underperforming hydropower, energy and transit industries.

But Mr. Bhattarai insisted that there was no bad blood with India.

“Friendship with all, enmity with none: It’s a core principle of our foreign policy,” he said. “Since the last Chinese president visited Nepal in 1996, things have significantly changed with China in terms of its role in regional and international affairs.”

But as China’s influence rises in South Asia, some officials in Nepal have voiced concerns about whether dealing with Mr. Xi will mean losing sovereignty.

To the south, Sri Lanka’s leaders have struggled to pay back China for funding a huge but failing port project, forcing the government to turn over the port and 15,000 acres of land around it to Beijing. The 2017 transfer gave China a strategic foothold along a crucial commercial and military waterway, as well as territory just a few hundred miles from India’s shores.

“There is a rising skepticism about Chinese ability to deliver on key projects, as well as concerns about credit terms and debt sustainability,” Mr. Xavier said.

In Nepal, monetary concerns have collided with ideological ones. Last month, Mr. Oli, his party and a 50-member delegation from the Communist Party of China hosted a two-day symposium on “Xi Jinping Thought,” the political theory undergirding China’s communist government.

The event drew ire from Nepal’s opposition leaders, who saw the exercise as a troubling way for a democracy to curry favor with China.

“Our constitutional and political provisions are based on democracy, pluralism, federalism, an open society and parliamentary democracy, all of which are missing in the Chinese system,” Bimalendra Nidhi, the vice president of the Nepali Congress party, told The Kathmandu Post.

Among the more sensitive issues on the table between Mr. Xi and Mr. Oli is the signing of an extradition treaty that could allow China to remove Tibetan refugees from Nepal, where many transit on their way to more permanent settlement in India.

Analysts said that the fate of the extradition bill could have implications for China’s surveillance capacity in South Asia as it extends credit lines across the region. It is this deal, which officials have declined to discuss in detail, that has been a primary pressure point by the Chinese ahead of Mr. Xi’s trip.

“The Chinese are offering huge economic incentives during this visit, but they are injecting their own interests, too,” said Mrigendra Bahadur Karki, who heads the Centre for Nepal and Asian Studies at Tribhuvan University in Kathmandu. “Xi is coming to Nepal to take it under China’s grip.”