White House advisors on Sunday walked back President Trump’s statement that he would make “permanent cuts” to the payroll tax if reelected, insisting that the president would preserve the primary funding source for Social Security, an entitlement program with overwhelming bipartisan support. 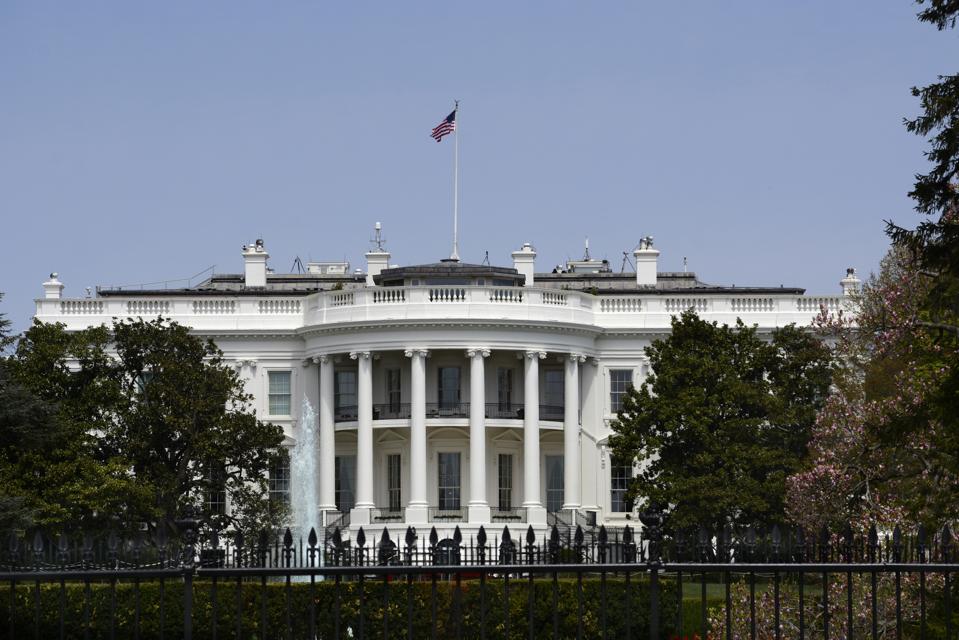 WASHINGTON, D.C. – APRIL 22, 2018: An American flag flies over the south facade of the White House … [+] in Washington, D.C. Additional security fences and barriers were added along the south perimeter to prevent people from jumping the fence and entering the restricted White House grounds. The Secret Service tightened the security on the south side in 2017 by closing access to the entire fence line on the South Lawn. (Photo by Robert Alexander/Getty Images)

Trump announced a payroll tax holiday as one of four executive actions in an attempt to cut through the deadlock between congressional Democrats and Republicans and the White House on stimulus negotiations.

In a speech announcing the actions at his golf resort in Bedminster, N.J., on Saturday, Trump also announced, “If victorious on November 3rd, I plan to forgive these taxes and make permanent cuts to the payroll tax,” adding “I’m going to make them all permanent.”

Trump’s announcement was taken further by Erin Perrine, a senior advisor to his reelection campaign, who tweeted that Trump would “look into terminating the payroll tax permanently” in a second term.

But those announcements drew swift and fierce condemnation from liberals, who were quick to note that the payroll tax funds Social Security and Medicare, broadly popular programs the defunding of which would doubtless damage Trump politically.

White House economic advisor Larry Kudlow asserted on CNN’s State of the Union that Trump “will protect Social Security and Medicare,” claiming that the deferral, not a payroll tax cut, is what “will be made permanent. It will be forgiven,” which CNN host Dana Bash argued is “not what the president said at all.”

Treasury Secretary Steven Mnuchin said on Fox News Sunday that, if reelected, Trump would “push through legislation to forgive that so, in essence, it will turn into a payroll tax cut,” adding the lost revenue would be offset by “an automatic contribution from the general fund to those trusts funds.”

“Here’s the problem: payroll taxes go exclusively to fund Medicare and Social Security, however much they dislike those payroll taxes, Republicans have always opposed replacing them with general tax revenues,” tweeted Patrick Chovanec, an adjunct professor of international and public affairs at Columbia University. He notes that even with Congress signing on to a payroll tax holiday, it would “create a hole” in funding Medicare and Social Security, which Republicans would normally be reluctant to fill. “Without Congress signing on, those taxes are just deferred a few months until a bigger bill comes due,” Chovanec concludes.

“Democrats are going to destroy your Social Security,” Trump tweeted in January, adding “I have totally left it alone, as promised, and will save it!” His campaign has stuck to that line even as former Vice President Joe Biden has accused Trump of waging a “reckless war on Social Security” with his executive action. “Sign of desperation for Joe Biden to bring up Social Security in response to President Trump’s EOs. This isn’t a topic he wants to get into,” tweeted Andrew Clark, the Trump campaign’s rapid response director, linking to a tweet accusing Biden of having a “terrible record” on Social Security.

74%. A Pew Research poll in March 2019 tracked overwhelming public support for maintaining present levels of funding to Social Security. 74% of U.S. adults polled said “no reductions should be made” in Social Security benefits for retirees, with the strongest support coming, unsurprisingly, from older voters. 81% of voters aged 50 to 64 and 79% of voters 65 or older said they would oppose cuts to benefits, as did 68% of Republican voters,

What To Watch For

Asked by Fox News host Chris Wallace how the U.S. would pay for Social Security through the general fund when the nation is already “running huge deficits,” Mnuchin said those concerns would have to be dealt with in the future. “You just have a transfer from the general fund,” he stated. “We’ll deal with the budget deficit when we get the economy back to where it was before.”