I am a 58-year-old woman, widow and college grad. I live in Rochester, N.Y. Although I like the area and weather, I do not like the taxes and politics.

I’m looking for a small town with some amenities (coffee shops, breweries, bookstore), low taxes and a conservative atmosphere. I also want to be within an hour of a major hospital, a major airport, and a ski resort.

I’d like to buy a place with a minimum of 50 acres, though I prefer 100. I’d like it on water (can be river or creek) that can have at least kayaks and be near hiking or bike trails.

I am planning on drawing an income of roughly $100,000 a year. My investments total approximately $5 million.

I can’t find you your 100 acres, but I can offer suggestions that get you in the ballpark. A local real-estate agent can take it from there.

As you likely know, bookstores are disappearing, especially independent stores, and COVID-19 is accelerating this trend. Smaller towns already know this, but it’s happening in bigger cities too. So kudos that you’ll be shopping in one.

The search for low taxes is a common refrain. Tax rules, like politics, can change. Tennessee has no state income taxes, and the phaseout of its tax on investment income (known as the Hall Tax) will be completed on Jan. 1. New Hampshire has no income or sales tax but does have a 5% tax on dividends and interest.

Given that most states have different ways of taxing income, investment income and pension income, this retirement tax calculator may help you compare taxes in different states. Still, you may want to talk to a tax pro given your focus on low taxes.

Income taxes, of course, are only part of the equation. One way or another, governments have to pay to clear the snow, repair the roads, run the schools and provide other services. So you may want to look at other costs you’ll be paying, such as car registration and property taxes, or what services aren’t covered.

Read:There is more to picking a place to retire than low taxes — avoid these 5 expensive mistakes

One suggestion: If powerful internet service is important to you, ask about availability before you buy. It’s not a given in rural areas.

Finally, you’re looking to move from a city of 200,000 and a metro area of more than 1 million to a small town or even outside one in a rural area. That’s a big shift. Whatever community you settle on, consider renting, even just for several months, to experience daily life and to test your strategy for building a new social network before making the move permanent.

I took a look at the states you mentioned. Here are three suggestions to get you started. 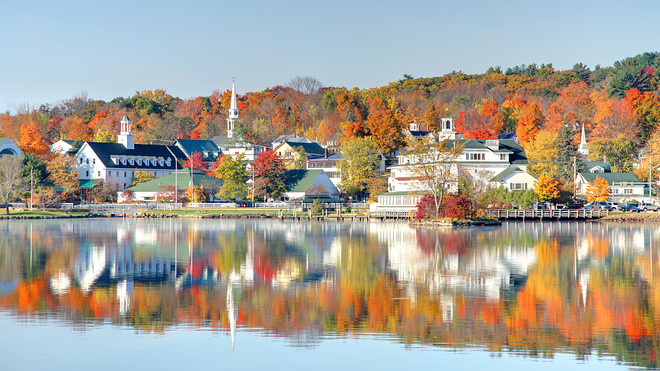 Lake Winnipesaukee with Meredith, N.H. in the background.

This area in the eastern part of the state includes some of the state’s most conservative towns. Belknap County is one of just two counties in New Hampshire where Donald Trump won a majority of the votes in 2020 and is the one where he fared best, with 54.5% of the vote. You could live in or near Laconia (the county seat with 16,500 people) or Alton, a town one-third the size that went for Trump by a 25-point margin. Nearby Middleton, with 1,800 people at the northern end of Strafford County, is another town that went heavily for Trump, but the county is heavily blue.

Coffee shops are everywhere, and breweries are plentiful, but your best bet for all that plus the bookstore may be Meredith, a town on Lake Winnipesaukee, the largest lake in the state. But Trump won this Belknap County town of 6,400 by only 69 votes, a 1.6-point margin.

Another bookstore option is Wolfeboro, on the opposite side of the lake. However, this town of 6,400 people went for Trump by an even tinier margin. Voters in Wakefield, a slightly smaller town 13 miles away — reachable by bike on the Cotton Valley Rail Trail — and also in Carroll County, were much bigger Trump fans. But Carroll County went blue. So there’s that to weigh.

If you live in Alton, you could ski 13 miles away in Gunstock Mountain Resort. The Portsmouth airport is 40 minutes away and the Manchester airport is an hour away. If the hospitals in Laconia and Wolfeboro can’t take care of you, you can always tap the medical facilities in those cities.

Both Meredith and Wolfeboro are 30-minute drives from Gunstock. In each case, one airport will be an hour away, and it will take an extra 15 or 20 minutes to reach the other. It’s a different combination for each place, so that’s another consideration for you.

I’m assuming you’re good with cold; in January, temperatures in Meredith on average reach 29 degrees and get down to 14 degrees at night. July highs average 81 degrees.

Here’s what properties are on the market now in Belknap County, using listings from Realtor.com (which, like MarketWatch, is owned by News Corp.) and in Carroll County. 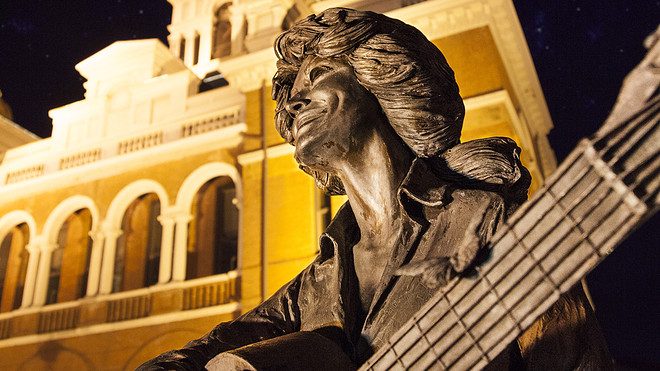 A statue of Dolly Parton in Sevierville, Tenn., the town where she grew up.

If the New Hampshire towns are too small for your liking, consider this town of 17,000 in eastern Tennessee.

More than 77% of Sevier County’s votes went to Donald Trump, so it’s definitely a conservative area. And Tennessee wins on income taxes, especially starting in 2021.

You’d be at the edge of Great Smoky Mountains National Park and 50 minutes from the Knoxville Airport. You can aim to be closer to Douglas Lake (a 30,000-acre reservoir and one of the largest lakes in Tennessee), a dozen or so miles away, but the West Prong of the Little Pigeon River flows through town. The town has several medical centers, including the University of Tennessee Regional Health Center-Sevierville, but there’s always Knoxville for more specialized care.

Gatlinburg is 14 miles to the south, and Dollywood, in Pigeon Forge, is along the way. (Dolly Parton grew up in Sevierville.)

Your local bookstore would be Books-A-Million, rather than an independent shop. The Gatlinburg Brewing Company has an outpost in Sevierville, and there also are a couple of distilleries in town. There are more breweries as you head toward Gatlinburg, and Knoxville, of course, has plenty,

As for skiing, Ober Gatlinburg, just past Gatlinburg, is your closest spot. You’d also be an hour and 40 minutes from the Cataloochee ski area in North Carolina. To be honest, that driving time is not much different than if you lived on the eastern edge of Knoxville (suggested here), so if you prefer to ski there, think about trying to get yourself closer to I-40.

Here’s what’s on the market now in Sevier County. 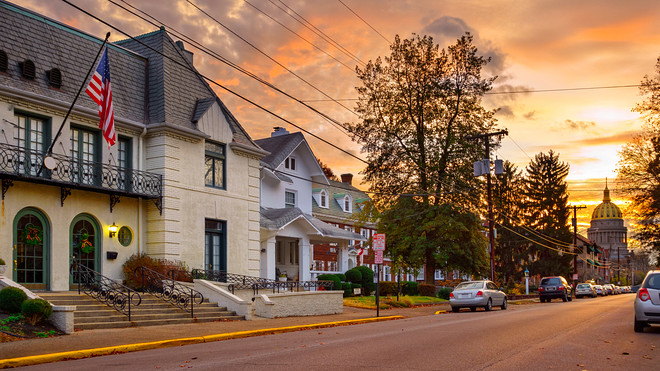 My third suggestion is the capital of West Virginia. Home to about 46,000 people, Charleston also is the state’s biggest city. You’d have an independent bookstore, a year-round farmers market, craft beer and distilleries as well as an airport. Winterplace Ski Resort is just over an hour away.

Conservative? Trump received more than 56% of the vote in Kanawha County, which includes Charleston. While that’s a wide margin, to be fair that’s low compared with most other West Virginia counties. (The narrowest Trump victory was in Monongalia County, home to Morgantown, suggested here, and West Virginia University.)

Finding a spot to play in the water shouldn’t be a problem. The Kanawha River flows through town, and five boat ramps are being built or improved along the 20-mile stretch of the Elk River between Clendenin and Charleston. The Gauley River National Recreation Area, 60 miles from Charleston, is a prime white-water rafting destination with over 100 rapids. New River Gorge National River, about 70 miles away, is a rugged, whitewater river flowing through deep canyons.

Kanawha State Park, 7 miles from Charleston, is one place to hike and bike. For something more adventurous, head an hour north toward Parkersburg and try the 72-mile North Bend Rail Trail. There is a push to connect a number of trails so there is a continuous stretch to Pittsburgh, 238 miles away.

Readers, where do you think Kim should retire? Leave your suggestions in the comments section below.

Here’s what’s on the market now in Kanawha County.

And:I’ll retire with a military pension and want to move to a bicycle-friendly, beer-loving place — so where should I go?