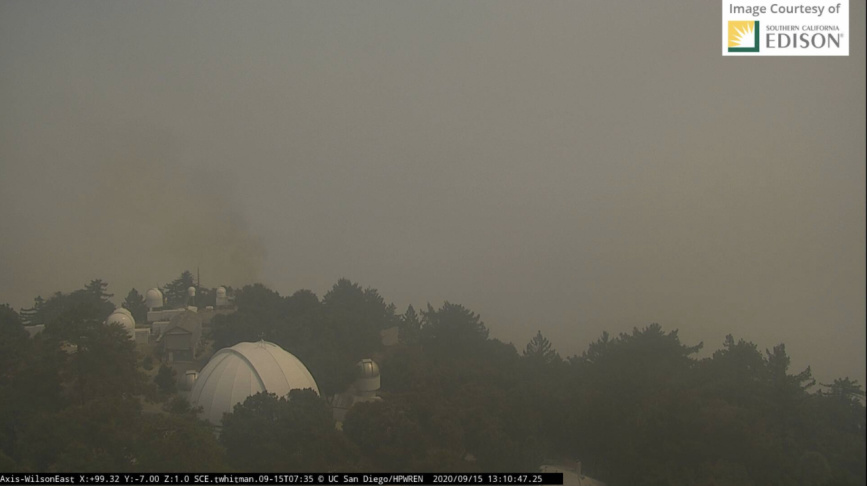 Smoke from the approaching flames of the Bobcat Fire are seen in this screengrab from a live camera feed from Mt. Wilson Observatory just after 1 p.m. on Tuesday, Sept. 15, 2020. (Courtesy SoCal Edison via AlertWildfire.org)

Our news is free on LAist. To make sure you get our coverage: Sign up for our daily newsletters. To support our non-profit public service journalism: Donate Now.

You may not have realized it, but sitting atop one of the highest points in the San Gabriel mountains, looming 5,700 feet over L.A., is arguably one of the world’s most important spots for scientific discovery: the Mount Wilson Observatory.

The 114-year-old site is covered in equipment that not only helped mankind discover the universe and cement Southern California as an astronomy hub, but still connects normal people to wonders beyond our own world.

Worryingly, the Bobcat Fire is charging right for it. Only 500 feet away as of Tuesday afternoon.

The #BobcatFire is within 500 ft of the Mt. Wilson Observatory & crews are in place ready to receive the fire. Strategic firing is taking place in the south where air operations are strengthening dozerlines. Crews are working a spot fire that crossed Hwy 2 near Buckhorn. pic.twitter.com/33rI3dNet2

Firefighters are mounting an aggressive defense, but there’s a chance that the century-old site could go up in flames.

The thought of which is heartbreaking. Not only because of its historic importance, but because it’s absolutely magical to be able to stand on Earth, look through a 100-inch telescope and see in full color planets throughout our solar system, and the galaxies far beyond.

The same environment that’s made Mt. Wilson the perfect spot for wildfires to spread — isolated, high up on a mountain in a dry climate — has also made it one of the best places in the U.S. to view the stars.

George Ellery Hale, one of the pioneers of astrophysics and the founder of CalTech, realized as much when he worked to build an observatory up there in the early 1900s.

With its groundbreaking 60-inch and 100-inch telescopes, scientists were able to study the stars in detail.

In 1918, Harlow Shapley figured out that our solar system is not in fact at the center of the Milky Way, but towards the outer edge.

And Edwin Hubble — yes that Hubble — used the 100-inch telescope to make an even bigger discovery.

“Effectively [Edwin] Hubble discovered the universe in the 1920s up on Mt. Wilson,” said John Mulchaey, director of the Carnegie Observatories in Pasadena, which owns the observatory.

Scientists had long believed that the Milky Way was just about all there was to the universe.

Then, in the early 1920s, Hubble focused the Mt. Wilson telescope on what was thought to be gas or matter floating through the Milky Way. Through a series of complex calculations, he figured out that it wasn’t dust, but an entire galaxy of its own, specifically the Andromeda galaxy.

He’d continue to discover other galaxies throughout the 1920s, eventually making another big finding in 1929: that the universe was expanding. A key component of the Big Bang theory.

“That really is kind of the basis of modern astronomy. And that’s why I really say that Mt. Wilson set the stage for how we understand the universe today,” said Mulchaey.

“The reason why astronomy is in Pasadena is because of Mt. Wilson,” he said.

As L.A. grew so did the light pollution, making Mt. Wilson less than ideal for observing space. By the 1940s, other observatories began to pop up around the world in more isolated spots. By the 80s, it went largely unused.

Now, scientists head to Hawaii and Chile, high above the dry desert, to gather information about our universe in much clearer detail.

That said, even if it doesn’t have the same scientific significance it once did, as a historic landmark, and as a place that the public can go to look through a humungous telescope and feel more connected with the universe, it’s priceless.

Not only does that take us outside of our own insular little worlds, but the process also exposes people to science.

Trump says Supreme Court list is down to 5 people, announcement...

2020 Emmys live updates from the virtual awards on TV's biggest...