A 17-year-old high school student at a prestigious northern Virginia boarding school is fighting possible expulsion that her attorney says is unfairly due to her conservative viewpoints expressed in a “cancel culture.”

Yet, other students, recent alumni and a teacher have not been punished by the school for harassing Mackenzie online. They sent her messages saying they would reach out to possible future colleges to ensure she would not be accepted, body-shamed her and harassed her about a previous interracial relationship, said Binnall.

ST. LOUIS COUPLE WHO WAVED GUNS AT PROTEST HAVE SPOKEN TO TRUMP ABOUT THEIR CASE, LAWYER SAYS

“There’s not an acceptance of divergent opinions right now in schools because there’s so much pressure from the left to extinguish opposing viewpoints. Conservative students — specifically I think my client is one of the best examples of this — are being targeted. It certainly happens on college campuses, but now it’s even happening in high schools,” he said.

In a letter addressed to Episcopal High School Headmaster Charley Stilwell on Tuesday, Binnall argued the school has “refused to take any meaningful action to protect Mackenzie from bullying or harassment,” while displaying “negligence and recklessness in turning a politically motivated blind eye to her attackers.”

“While it might wish to push its political narrative on students, conservative ideology and freedom of thought has not (yet) been explicitly forbidden by the school,” Binnall wrote. “Instead, in a series of actions that would make Orwell blush, EHS has tried to force Mackenzie out because she refuses to surrender to the school’s Newspeak type-agenda surrounding rhetoric supported by the Black Lives Matters organization—an admittedly Marxist group.”

Annual tuition at the private boys and girls boarding school is more than $60,000 per student.

Binnall said the school provided screenshots to Mackenzie related to her disciplinary hearing, but “none of the posts come close to violating school rules as outlined in the EHS Student Handbook.”

During the disciplinary process, the school won’t allow Mackenzie an adviser or outside counsel, he said. It has scheduled hearings with her this week, leaving her little time to study for her PSAT. 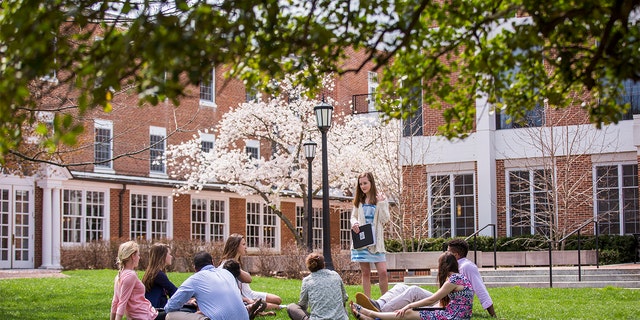 Binnall said the harassment began in June when Mackenzie showed sympathy on her Instagram stories for David Dorn, a Black retired police captain killed in St. Louis, Mo., during rioting and classmates started to attack her via direct messages and by starting fake accounts. He said his client also was sharing “mainstream conservative” content from Prager University and Turning Point USA on her Instagram stories.

A teacher also appeared to accidentally respond to one of Mackenzie’s stories thinking he was reaching out to a different student to gossip about her, he said.

In a statement provided to Fox News, Episcopal High School declined to provide a detailed account of the situation, citing school policy, but said the “issues involved do not relate to either conservative or liberal political perspectives.”

“We do not discipline students for their political positions; that would be antithetical to the values we hold closely as a community. We do, however, set clear expectations for how all of us — students and adults — engage with and treat one another, and we have worked hard in recent years to help our students learn to hear and respect each other’s differences even as they engage in conversations on topics about which they disagree,” Stillwell wrote.

The headmaster added that the school is “aware and disappointed that a faculty member acted unprofessionally in an online exchange that involved the student. The interaction was unacceptable; we expect members of our community, most particularly the adult role models, to treat each other with respect at all times. While we are limited in what we can share about personnel matters, we addressed this incident and are continuing to take it seriously.”

Fox News is not mentioning Mackenzie’s last name because she is a minor.

United Airlines Hunkers Down for Long Air-Travel Drought – The Wall...