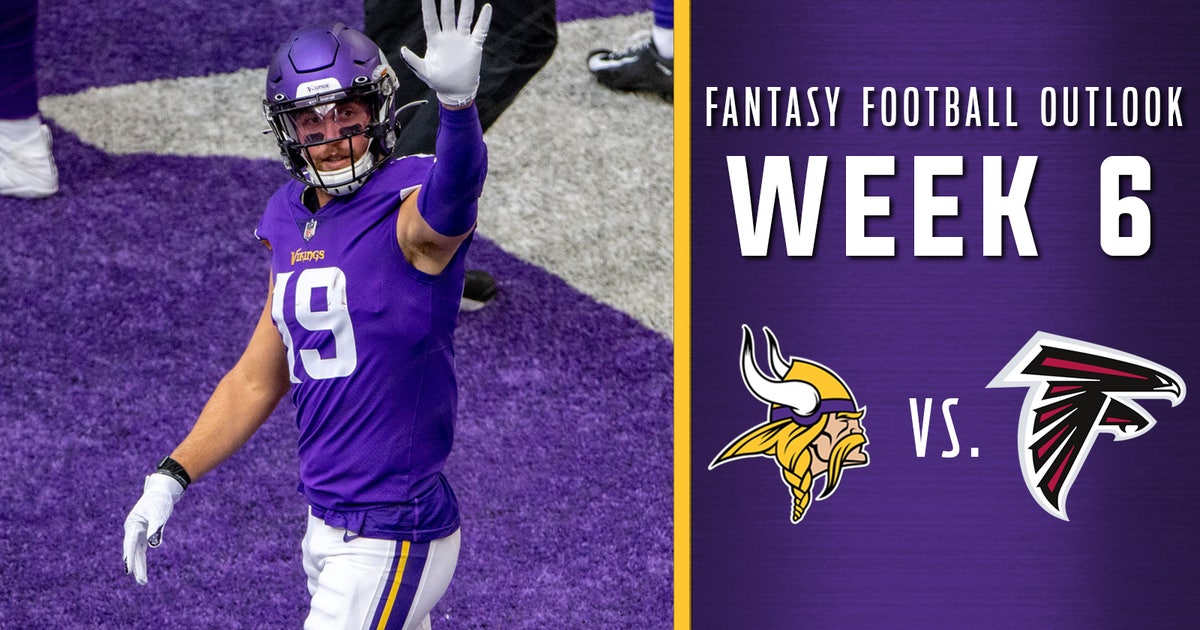 You can’t guarantee much in the year 2020 – even the status of NFL games has constantly been in jeopardy.

One thing that you can count on, though, is fantasy football production against the Atlanta Falcons, who just so happen to be the opponent of the Minnesota Vikings on Sunday.

Each week, we’ll take a look at the players with fantasy value on the Vikings and their opponent. Player matchups are graded on a 1-5 scale of football emojis, from “don’t even think about starting him” (🏈) to “you’re a fool if you bench this guy” (🏈🏈🏈🏈🏈).

Here’s how Week 6 shakes out:

If you’re going to start Cousins one time in 2020, this is the week. Atlanta has coughed up the most fantasy points of any team to quarterbacks, as it has allowed an average of 345.6 passing yards and three touchdowns per game to go along with a passer rating of 118.8. The only reason Cousins doesn’t get a full five-football rating this week is due to the threat of the Vikings jumping ahead early and it becoming a ground game, like it did last season. Cousins played the full contest against the Falcons to open the 2019 season and attempted just 10 passes, completing eight for 98 yards and a touchdown.

The status of Cook’s groin injury, suffered in Week 5 against Seattle, is the big storyline to watch throughout the week. It’s very unlikely that Cook plays, and he did not practice Wednesday. If he does play, though, start him. In 2019, Cook torched Atlanta for 120 total yards and two touchdowns.

The Falcons haven’t allowed a 100-yard rusher yet, but Ezekiel Elliot (89 yards) and Mike Davis (89) were close. We’ll chalk that up to opposing teams opting to tear up Atlanta’s secondary rather than the Falcons having a stout run defense. Even if it’s a pass-happy game for Cousins, Mattison (if Cook misses the game) is a safe start. The Falcons have allowed 8.6 receptions per game to running backs alone, adding up to the second-most receiving yards to the position. Even if Cook plays, he’ll likely be on a pitch count, meaning Mattison could still have a workload worthy of your FLEX spot. In 2019, Mattison saw nine carries for 49 yards against the Falcons — a game that Cook played.

Atlanta has allowed seven different receivers to rack up 90+ yards. Reminder: The Falcons have played five contests. Thielen, who saw 13 targets last week, should be on the receiving end of another big game as Cousins’ favorite option. He hauled in three receptions for 43 yards and a touchdown against Atlanta last year in a game that Cousins attempted just 10 passes.

There should be plenty of work to go around for both Thielen and Jefferson to post great stat lines. Jefferson is the Vikings’ best deep threat, and guess what? No team has allowed more receptions of 20+ yards than Atlanta. In three of the Falcons’ five games, they’ve coughed up at least 92+ yards to a team’s WR2 – Carolina’s D.J. Moore, Seattle’s Tyler Lockett and Dallas’ CeeDee Lamb.

Welcome to the best matchup for Vikings tight ends so far. It was encouraging to see Smith be the recipient of Cousins’ first two targets last week against Seattle, as he racked up a season-high four catches for 64 yards. Rudolph, on the other hand, has yet to log more than two catches in a game. The Falcons have yielded a league-high seven scores to tight ends, including three to Green Bay’s Robert Tonyan alone in Week 4. It’s a coin flip on which tight end will get said targets, but we’re favoring Smith over Rudolph based on his increasing role in the offense.

Although the Falcons have their struggles, to put it nicely, on defense, Matt Ryan can still chuck that pigskin. Keep Minnesota on your bench — er, waiver wire — until we witness results from their young secondary.

Minnesota has allowed 300+ passing yards to quarterbacks in three of five games. But be wary of Ryan, who hasn’t tossed a touchdown pass over the last two weeks despite throwing the ball 76 times. He’s a much better fantasy quarterback with a healthy Julio Jones, who might miss another game against the Vikings this week. In six career games against Minnesota, Ryan is averaging 233.5 yards, 1.6 touchdowns and one interception per contest.

Gurley’s still got it. He’s scored at least one touchdown in four of five weeks, and a juicy matchup against the lowly Vikings run defense should place him back in the end zone. Minnesota has given up at least one touchdown to running backs in all but one week. Gurley averages 15.8 carries per game. All running backs with 15+ attempts against Minnesota have gained 63+ yards, and Indianapolis’ Jonathan Taylor and Tennessee’s Derrick Henry both went off for 101+ yards.

Be careful here, even if Jones will suit up and play. Jones was active in Week 4 against Green Bay but only played in 21% of the snaps due to a nagging hamstring injury, which held him out last week and has his status in question once again.

Ridley has racked up 109+ receiving yards in four of five contests this year, the only exception being his strange no-catch outing against Green Bay in Week 4. He’s seen 10+ targets in four games, which should continue especially if Jones misses the game. The Vikings have allowed the sixth-most fantasy points to receivers in 2020.

Although Hurst has seen six targets in both of his last two games, we’re benching him against Minnesota. Vikings linebackers Eric Kendricks and Eric Wilson are stellar in coverage, and it shows — just two tight ends have topped 46 yards, and only one has scored.

There’s enough statistics above to warrant a one-football rating. If you even think about starting Atlanta’s defense in fantasy football, you should be relegated from your league. Please don’t.