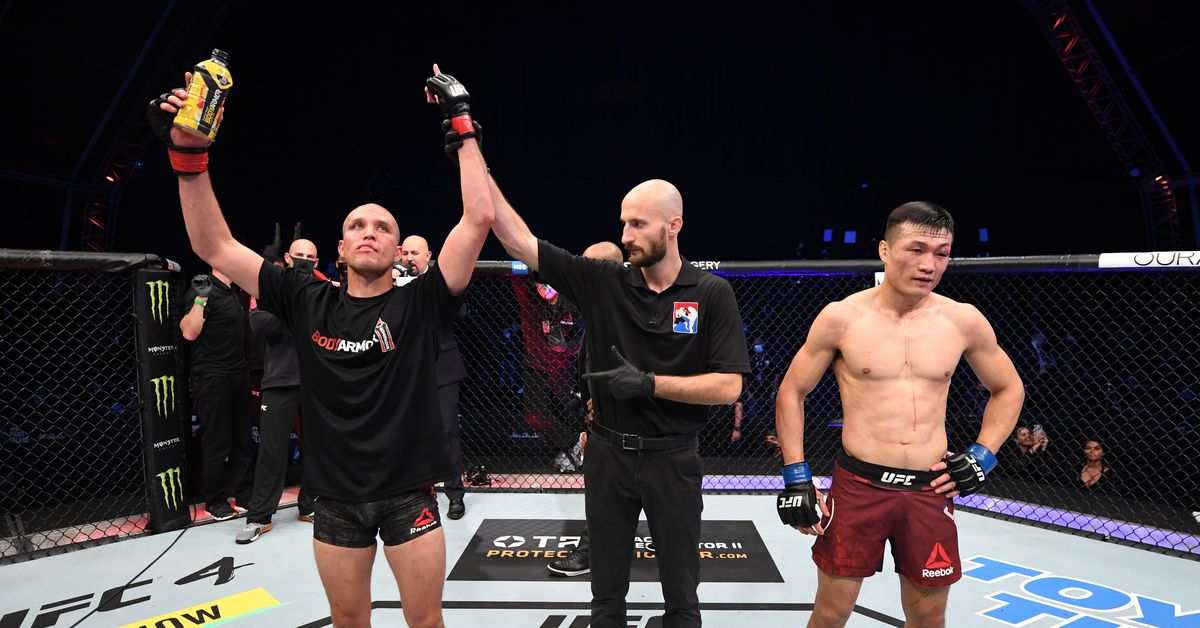 After nearly two years of being on hiatus to get his body right, as well as to overhaul his mixed martial arts (MMA) game, Ortega came into the Octagon a different man. And not just because he was missing his silky smooth hair, but because his approach to the fight was a bit different. Indeed, “T-City” dropped the majority of his old team and picked up some new coaches to help him get to the next level. And the difference showed. Ortega was a lot more methodical with his approach, never rushed in and picked his shots perfectly. Known for his great submission game under the tutelage of Rener Gracie — who couldn’t make the trip to “Fight Island” — Ortega showed that he is far from a one-trick pony. He stood toe-to-toe with “The Korean Zombie” — a strategy that doesn’t bode well for most — and won, knocking Jung down twice and busted him open pretty badly. Now, “T-City” can shift all of his focus to another title shot, as he will next face Featherweight kingpin, Alexander Volkanovski.

After dropping back-to-back fights in the Strawweight division, Andrade opted to make the move up to 125 pounds. A move that proved to be a wise one, as “Bate Estaca” did great in her first fight in her new division by knocking out former title contender, Katlyn Chookagian, with a solid body shot. With the win, Andrade inserts herself into the mix which means a couple more big wins could put her at the front of the line to face division queen, Valentina Shevchenko.

Krause once again answered the call when UFC needed him on short notice, this time to face Claudio Silva after Muslim Salikhov was forced out of the event. This time around, Krause came out on the winning end, defeating Silva via unanimous decision. And it was a huge victory, too, as Claudio — who has a win over Leon Edwards — was previously on a 14 fight win streak and hadn’t tasted defeat in 13 years, a loss in his pro debut. Krause, meanwhile, is on a seven fight win streak, which should be more than enough to put him in the Top 15, as he is more deserving of a slot at 170 pounds than Nate Diaz is (No. 13), who only has two wins in the division in four years.

Coming into the event, we determined that Almeida was the fighter most in need of a win after losing his previous two. And it turned out to be something the Brazilian bomber simply couldn’t accomplish as he was picked apart by late replacement, Jonathan Martinez. That is now three straight losses for Almeida, who has dropped four of his last five. It’s a drastic fall from grace for the man who came into the Octagon as one of the top undefeated prospects in the game, racking up 20 straight wins before running into the heavy hands of Cody Garbrandt in 2016. Since then, Almeida has only managed to pick up a win over Albert Morales before going on his long drought. Where he goes from here is unknown, but Almeida needs to change something in his game, camp or personal life to get back on track.