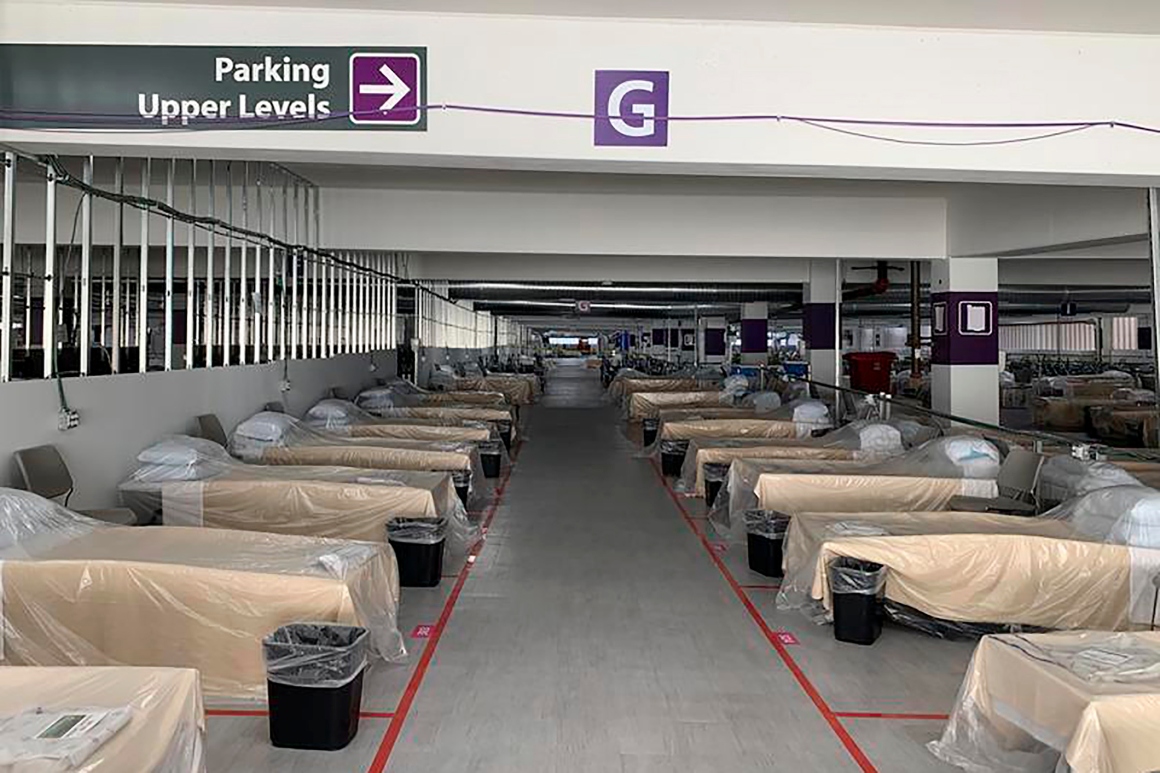 Hospital beds sit inside Renown Regional Medical Center’s parking garage, which has been transformed into an alternative care site for Covid patients, in Reno, Nev., on Nov. 11, 2020. | Lucia Starbuck/KUNR Public Radio/Report for America via AP

U.S. coronavirus deaths surpassed a quarter-million on Wednesday as the pandemic continued to rage across the nation, threatening to overwhelm health care systems.

The milestone, based on a tracker maintained by Johns Hopkins University, came as the nation recorded an average of more than 150,000 cases per day over the past week, with about 70,000 people hospitalized, according to the Covid Tracking Project.

The U.S. continues to lead the world in deaths and confirmed cases, with about 11.5 million infections, according to the Johns Hopkins tracker. The U.S. accounts for about 18.5 percent of coronavirus deaths globally, even though it comprises just 4 percent of the world’s population. Brazil has the next highest number of total deaths, with 166,699, followed by India, with 130,993.

Public health officials have long warned of a grim winter and rising daily death counts that exceed the peak of the summer wave. But the quarter-million mark is especially stark, considering that government scientists last spring viewed 240,000 U.S. deaths as a high-end estimate.

Meanwhile, hospitals in the Midwest and elsewhere are already warning there are not enough doctors and nurses to handle the surging caseload, with 22 percent of hospitals — excluding those that focus on psychiatric care or rehabilitation — reporting staff shortages in mid-November according to HHS data. Intensive care units are nearly at capacity, with multiple states approaching 90 percent occupancy across all facilities.

In some regions, major hospitals are once again shutting down all elective procedures to free up scarce staff and resources. Unlike in the spring, the nationwide reach of the current surge means there are fewer health care workers traveling to hot spots.

“The ability to get ventilators and PPE has vastly increased, but we don’t have a way to make more staff,” said Lewis Kaplan, president of the Society of Critical Care Medicine, in an interview. “There’s no one to spare.”

States and communities across the country are again implementing restrictions on indoor dining and group gatherings, and some red state governors who resisted mask mandates earlier in the pandemic have reversed course.

One bright spot is promising vaccine trial results that have raised hopes that the pandemic could finally be brought to an end. But viable vaccines will likely take months to distribute and won’t be available to the general population until April at the earliest, accoording to Anthony Fauci, the government’s top infectious disease expert. Health care workers and medically vulnerable Americans will be among the first in line.

The Trump administration hopes to vaccinate about 20 million people in December if the FDA authorizes the vaccines for emergency use.