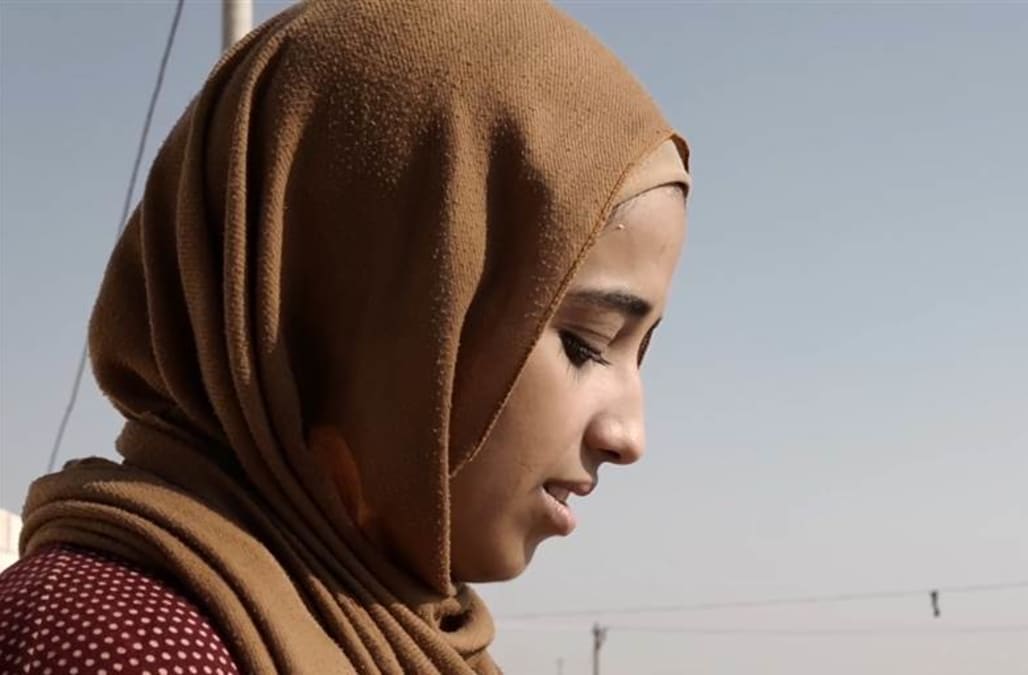 AL-ROJ CAMP, Syria — An American-born woman who once urged jihadists in America to “go on drivebys, and spill all of their blood,” says she “regrets every single thing” and believes she should be given the option to return to the United States with her young son.

“Anyone that believes in God believes that everyone deserves a second chance, no matter how harmful their sins were,” Hoda Muthana, 25, said in a wide-ranging interview with NBC News from a refugee camp in Syria where she and her 2-year-old son, Adam, live in a tent.

Muthana, who left her home in Alabama to join the Islamic State militant group in 2014 and married three fighters, is one of a number of Western extremists who present a headache to their governments as they want to return home.

Muthana now claims to reject the extremist ideology that she once espoused so freely online, but faces an uphill battle to be allowed back into the U.S. And simply getting by day to day is a struggle, she says.

She says she finds it “hard to get up in the morning” and, despite being moved from the larger al-Hawl refugee camp for her own safety, is scared of retribution from whom she calls the more radical women around her.

She also claimed to be afraid of speaking out, saying it could result in her becoming a target.

“I am risking my life doing these types of interviews,” she said.

Picture taken on May 5, 2012 shows former German rapper Denis Cuspert (C) among salafi in Bonn, Germany. Denis Mamadou Cuspert, who rapped under the name Deso Dogg but took on the name Abu Talha al-Almani in Syria, was initially reported to have been killed in a suicide attack Sunday in an eastern province but hours later some retracted the claim, saying he was still alive. AFP PHOTO /DPA/ HENNING KAISER GERMANY OUT (Photo credit should read HENNING KAISER/AFP/Getty Images)

The al-Roj camp, in the far northeast of the country, holds about 500 foreign women, who traveled to Syria to live under ISIS rule, and their children. Located in a desert area about 30 minutes from the nearest town, the camp is basic but does have a school and a hospital provided by the United Nations.

The refugees are guarded by the YPJ, the all-female Kurdish militia group that found international recognition during the fight against ISIS.

Earlier this year, President Donald Trump tweeted that he had instructed Secretary of State Mike Pompeo to refuse Muthana’s re-entry into the U.S.

“Ms. Hoda Muthana is not a U.S. citizen and will not be admitted into the United States,” Pompeo told NBC News earlier this year.

“She’s a terrorist,” he added.

Although she was born in New Jersey, and traveled to Syria with her U.S. passport, the government argue she should never have been considered a citizen in the first place as she was the daughter of a diplomat serving for the Yemeni government at the time.

The children of foreign diplomats based in the U.S. are excluded from the right to citizenship by birthright.

Muthana’s father Ahmed Ali Muthana had originally come to the U.S. in 1990. When his diplomatic posting concluded in 1994, the family were permitted to remain in the U.S. due to the civil war ravaging their home country.

The family — Hoda is the youngest of five children and the only one to be born in the U.S. — moved to Alabama where she lived until she fled to join ISIS in 2014. The rest of her family are naturalized U.S. citizens and remain in the U.S.

Ahmed Ali Muthana is now suing the government on behalf of his daughter and grandson, and claiming that his employment in Yemen’s diplomatic service ended months before she was born.

Muthana’s attorney Charlie Smith told NBC News that the family don’t want to comment, but said that he has no doubt she should still be considered a citizen despite the fact she burned her passport in Syria.

“If you’re issued a passport you’re a citizen,” he said. “The only way citizenship can be revoked is by clear evidence in a proceeding.”

“That has not happened. A tweet is not a proceeding,” he added.

If the legal action is successful, Muthana would be free to come back to the U.S. where she has indicated she is willing to face the justice system.

Following the collapse of ISIS, governments around the world have been grappling with the challenge of what to do with their residents and citizens who traveled to Syria and Iraq and now want to return home. Many have had their citizenship revoked.

Raffaello Pantucci, a senior associate fellow who researches terrorism at the London-based defense think tank RUSI, said that while he doesn’t agree with revoking citizenship, Western governments have decided it is a “useful tool” and “will continue to use it when it suits their interests.”

Following widespread criticism from European leaders of Turkey’s incursion into Kurdish-held areas of northern Syria, President Recep Tayyip Erdogan even threatened to release ISIS prisoners and other refugees into Europe.

Pantucci believes Turkey won’t do that as it would be “incredibly inflammatory.”

But, he said, “it’s really up to Western governments to figure out what they are going to do with these people.”

Shamima Begum, who left Britain to join ISIS in Syria, is currently appealing the British government’s decision to revoke her citizenship, claiming it made her stateless. U.K. ministers argue that she’s not stateless as she holds Bangladeshi citizenship despite never having visited that country.

During her time in Syria, Begum gave birth to three children, all of whom died.

And it’s the health of her son that animates Muthana the most.

“I’m scared of my son being here,” she said. “We can’t afford bottled water, so we have to drink the tank water and … it causes stomach aches.”

She said that the fumes from the nearby oil fields gives her and her son headaches “every day, every hour almost.”

For her part, Muthana says she just wants to return home with her son.