Silicon Valley’s moves to eject President Trump from social media represent a display of power the companies have avoided making for nearly four years. Now
Twitter Inc.,
Facebook Inc.
and others must reckon with what comes next.

In a span of a couple of days, Twitter and Facebook—Mr. Trump’s main social-media megaphones—took action to silence the president’s personal accounts or online communities devoted to him, citing rules prohibiting content that incites violence. They were joined by companies such as
Snap Inc.
and Reddit Inc.

Apple Inc.,
Amazon.com Inc.
and
Alphabet Inc.’s
Google also took steps to boot Parler, a social-media app and website that has grown in popularity among conservatives—and which some rioters had used to promote Wednesday’s attack at the U.S. Capitol, according to screenshots viewed by The Wall Street Journal.

The actions against Mr. Trump and Parler illustrate more starkly than ever the companies’ influence over conversation online—and the political nature of their decisions. While lauded by many, ejecting the president and some of his supporters also infuriated others who said it amounts to censorship, and the moves risked driving off some users in a way that, especially for Twitter, could reshape their businesses. It also illustrates the political nature of how they determine what content to remove, what content to allow and what to amplify.

“Right or wrong, they made a political decision,” said

Jonathon Hauenschild,
director of the communications and technology task force for the American Legislative Exchange Council, a conservative nonprofit group, regarding the companies’ moves. Attention on the tech giants “was there to begin with. Now the spotlight is fully on,” he said.

The tech companies acted in response to Wednesday’s attack by Trump supporters in Washington, in which five people died. That mob was mobilized largely on social media, and Mr. Trump’s posts before and during the episode were criticized by Democrats and Republicans for inflaming and supporting the crowd. Many people outraged by the event—including employees working for those companies—demanded that Twitter, Facebook and others take more aggressive action than they had in previous controversies involving Mr. Trump. The companies said removing Mr. Trump and Parler from their platforms was necessary to prevent online posts that could lead to further violence.

“
‘It’s a seismic change. It’s a step on the part of the platforms to recognize that what happens on their platforms has consequences in real life.’
”

Chris Nolan,
chief executive of San Francisco-based ad-buying firm Spot-On, of companies’ actions to ban the president. “It’s a step on the part of the platforms to recognize that what happens on their platforms has consequences in real life.”

The decisions added fuel to an already raging debate over whether the platforms do too much to police content on their platforms or not enough.

Sen. Marco Rubio
(R., Fla.) and others, said the impact of the platforms’ decisions suggests the tech industry’s sway over public conversation is too great.

“We are now living in a country where four or five companies, unelected, unaccountable, have the monopoly power to decide, we’re gonna wipe people out, we’re going to erase them, from any digital platform, whether it’s selling things and the like,” he told Fox News on Sunday.

Some allies of Mr. Trump have said they would shift their activity on Twitter to other platforms—including Parler and Gab—deemed more tolerant of speech. Twitter on Friday also suspended some other accounts related to Mr. Trump and his backers, including those of his campaign and one of its senior officials, as well as several associated with the far-right conspiracy group QAnon that Twitter said violated its policy on coordinated harmful activity.

For Twitter, in particular, it is unclear how the decision will affect the company’s business. The president’s personal Twitter account had more than 88 million followers, which equated to nearly half of Twitter’s total number of average daily users. And while Mr. Trump wasn’t Twitter’s most widely followed member, his tweets stirred conversation and engagement for Twitter users across the political spectrum. Having the president embrace Twitter as his platform of choice reinforced the company’s pitch to the broader public that it serves as the go-to place to know what is happening.

At the same time, Mr. Trump’s frequently contentious tweets also created headaches for the company, as it tried to enforce its rules and ensure the platform is hospitable for big-name advertisers.

“From a business standpoint, I don’t see this as a problem for the social-media companies,” said

Eric Ross,
chief strategist at Cascend Securities, who covers publicly traded technology companies. “It seems like they were already moving in the direction of limiting people’s political commentary and discourse, and advertisers seemed to be following them.”

Facebook and other companies might feel less impact to their businesses from moderating the accounts of Mr. Trump and his followers. Yet their actions showed how companies have evolved during the Trump era.

Now, companies such as Facebook employ thousands of moderators and use artificial intelligence and other technology to keep tabs on what their users post. At Twitter, acrimony on the platform began to pose a liability to business, a former executive said.

“It got to a point where there became an expectation that Twitter needed to police it more, or people wouldn’t use the platform for fear of being subjected to abuse,” the former executive said.

Companies’ actions will likely come under even more scrutiny as regulators pursue antitrust cases against several tech giants, and as Congress and the incoming Biden administration look to revamp 25-year-old legislation known as Section 230 that has long provided a liability shield for the platforms’ decisions over content regulation. 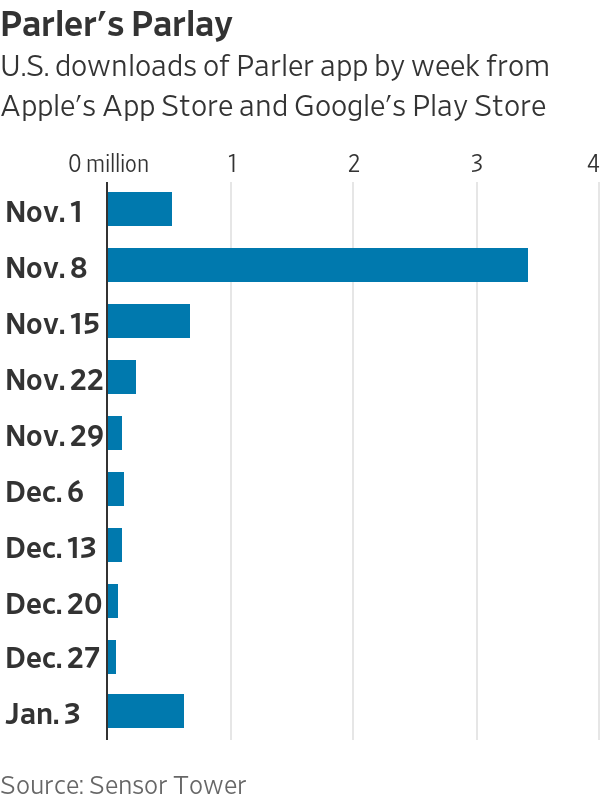 In recent months, Parler had become a refuge for some conservatives upset about what they saw as overreach and bias by the mainstream platforms. On Friday, Parler had been downloaded 182,000 times across Apple and Google’s app stores, a 14-fold increase in its number of downloads from the previous Friday, according to app-analytics firm Sensor Tower Inc.

Yet Parler has also faced criticism for its hands-off approach to moderation, including speech from neo-Nazis and other groups that call for violence.

Parler’s future is unclear.
Amazon
said it would stop providing cloud-computing services to Parler as of late Sunday Pacific time, potentially grounding the platform’s operations. Google and Apple removed it from their app stores, meaning even if it can restart, its app would be unavailable to many smartphone users.

Apple and Google require apps in their stores to moderate content. Google pointed to examples of content it found on Parler that threatened elected officials and called for plans to organize a militia march. One user posted: “How we take back our country? It’s simple…we hunt them down!” Google also flagged images of fliers shared on Parler that called on armed militias to march on Washington, D.C., the day of the inauguration.

Parler executives told the Journal the company has doubled its team of volunteer moderators and instructed them to search “hot” hashtags to gauge whether users are inciting violence. Parler Chief Executive

John Matze
said the company has been removing users who violate its terms.

Mr. Matze said keeping his business running will be difficult because companies it has relied on to operate have suddenly stopped working with it. “Our vendors dropped us all at once,” he told the Journal. With Amazon planning to cut off Parler’s data storage and processing contract at 11:59 p.m. Pacific time Sunday, he expects Parler to become temporarily unavailable. “In the best-case scenario, it’ll be 12 hours. In the worst, worse-case scenario, weeks,” he said.

Though Parler and other smaller platforms might grow, longtime observers of social media say the significant scale of Twitter and Facebook make those platforms unlikely to lose their influence.

Smaller venues full of like-minded users don’t give users the chance to reach new audiences, leaving participants competing with each other for attention, said

Joan Donovan,
director of research at Harvard University’s Shorenstein Center on Media, Politics and Public Policy. “Once someone’s been removed from the mainstream networks,” she said, “they tend to become very marginal.”

—Keach Hagey and Jeff Horwitz contributed to this article.

Write to Sarah E. Needleman at sarah.needleman@wsj.com and Georgia Wells at Georgia.Wells@wsj.com

Dense Fog Advisory issued January 16 at 4:35AM PST until January...