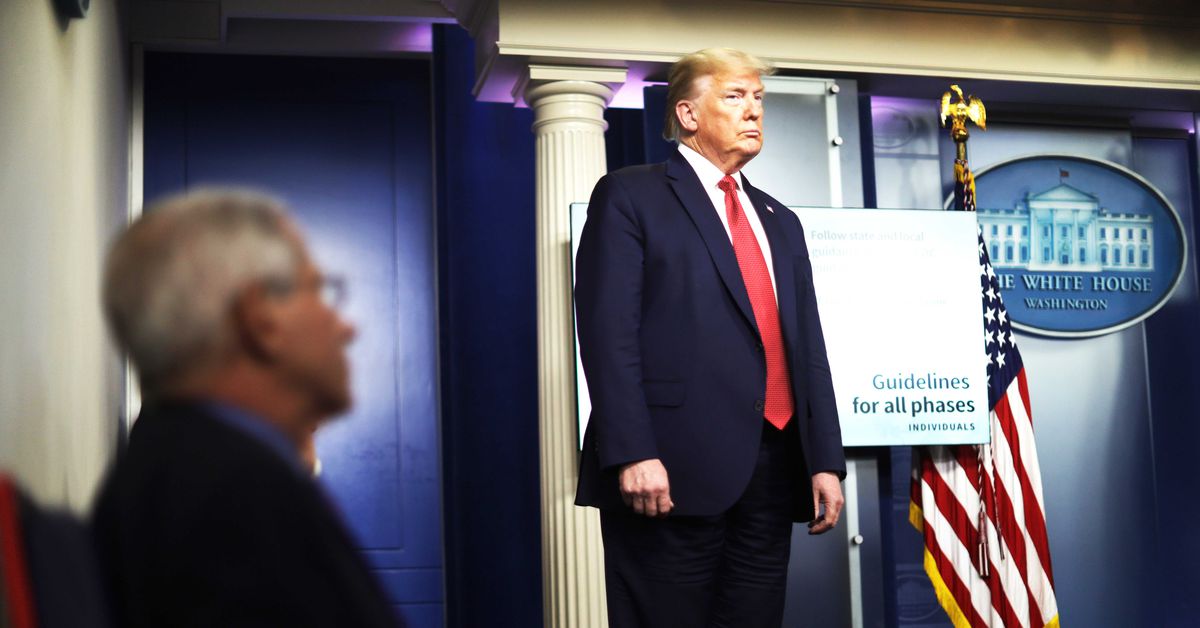 The United States has now reported more than 672,000 confirmed coronavirus cases and more than 30,000 deaths. The global total is at nearly 2.2 million cases and nearly 150,000 dead.

Yet President Donald Trump has just put forward new guidelines for how US states can begin to ease some of the lockdown restrictions that have been in place for the past several weeks.

On Thursday, the president revealed his administration’s step-by-step plan to “Open Up America Again,” though he said that, ultimately, the decision to begin easing shutdowns would be left to the discretion of state governors. Some states are already considering plans to loosen measures in the coming weeks; others have extended their lockdowns.

The steps themselves laid out in the plan make sense; they offer a gradual, phased-in approach to bringing people back to work and reopening businesses. But the US still lacks large-scale testing or surveillance infrastructure, which means that even this kind of careful, gradual reopening risks once again sparking outbreaks.

China on Friday revised the official death toll in Wuhan — where the virus first originated — raising it by nearly 50 percent, from 2,579 to 3,869. Officials denied a coverup, but the massive revision is likely to raise even more questions about Beijing’s handling of the pandemic.

And in Brazil, President Jair Bolsonaro fired his health minister, who was both popular and widely praised for trying to stanch the outbreak in the Latin America country, even as Bolsonaro tried to downplay it.

Here’s what you need to know today.

On Thursday, Trump released his proposal for reopening the American economy, after weeks of shutdowns across the country because of the coronavirus. The lockdown measures appear to be slowing the public health crisis, but they have pushed the US economy to the brink of collapse, with approximately 22 million Americans filing for unemployment in just about one month.

“Now that we have passed the peak in new cases, we are starting our life again. We are starting rejuvenation of our economy again, in a safe and structured and a very responsible fashion,” Trump said at a press conference Thursday. “We are not opening all at once, but one careful step at a time.”

Trump said that governors would “call the shots,” and said some states that have not been badly hit by the virus could start reopening soon, while others might take longer.

Broadly, the plan lays out three phases. Phase One asks vulnerable individuals to stay at home and encourages everyone else to maintain social distancing measures like avoiding socializing in groups of 10 or more people and keeping nonessential travel to a minimum. It also says large venues, like movie theaters, can reopen if distancing measures are in place, but bars should stay closed.

Phase Two loosens restrictions further, allowing for nonessential travel and gradually reopening schools and bars, the latter with reduced capacity. Vulnerable people should continue to shelter in place; everyone else is asked to avoid gatherings of 50 or more.

Phase Three says vulnerable people can resume normal activities, while advising them to still be cautious, and places can open for business, though some must adopt some social distancing limits and/or increased sanitary practices.

The plan also includes specific criteria states or regions must meet before beginning each phase. You can read the full proposal here.

The phase-in proposal is similar to what other countries, like Germany, have put forward in a gradual attempt to reopen businesses and schools.

But — and it’s a very big “but” — it’s unclear whether the United States actually has the infrastructure in place yet — things like massive, widespread testing and contact tracing — for this kind of phased-in reopening plan to work.

Social distancing measures aren’t a cure-all to coronavirus; they’re meant to put society on pause to slow the rate of infection so the health care system is not overwhelmed. But they’re not meant to replace other measures like testing, contact tracing, surveillance, and isolation of the sick.

In fact, testing has actually slowed in the United States, driven in part by shortages of equipment, reagents, test kits, and machines to run the tests, and in part because in many places, the criteria for being tested is still heavily tilted toward health care workers and people who are sick enough to require medical treatment.

This is one reason the plans to end social distancing are so grim: Not only do they suggest that some level of social distancing will be needed for the next year or so (until a vaccine or a similarly effective treatment is widely available) — which we don’t know if the country can sustain — but they call for a level of surveillance and testing the US simply hasn’t shown the ability and willingness to build and manage yet.

This may change, especially as business leaders themselves begin to put pressure on the administration to widely ramp up testing capabilities.

But Friday, the president — who just said Thursday that he would let governors call the shots — is already using Twitter to do the opposite, calling for specific states (particularly ones that have seen protests against stay-at-home orders recently) to be “liberated.”

LIBERATE VIRGINIA, and save your great 2nd Amendment. It is under siege!

Trump’s mixed messages may be a political ploy to portray himself as the “good guy” who wants to get everyone back to work.

But Trump said governors would have discretion on when to reopen, and undermining those governors who feel stay-at-home orders are still necessary to protect the people of their state could have devastating consequences. A premature loosening of rules will only deepen both the public health crisis and the economic pain.

The coronavirus outbreak originated in Wuhan, China, and the Chinese government has faced mounting criticism for hiding information about the severity of the virus in the early days of the pandemic, which experts say helped create the global catastrophe the world is seeing now.

And given the scale of the crisis, China’s own statistics about the coronavirus have been called into question throughout the course of the pandemic. The country imposed a months-long, unprecedented lockdown to control the virus, but the US intelligence community and others say China has underreported both the total number of cases and the death toll in the country.

Now, China has revised the official death toll in Wuhan by more than 1,200, an increase of about 50 percent. The number of coronavirus deaths jumped from 2,579 to 3,869. Officials also slightly revised up the number of infections in the city by more than 300, for a new total of more than 50,000.

Officials said the revision was because of incorrect and delayed reporting, not from some attempt to cover up information, according to the Guardian.

“Medical workers at some facilities might have been preoccupied with saving lives and there existed delayed reporting, underreporting or misreporting, but there has never been any cover-up and we do not allow cover-ups,” China’s foreign ministry spokesperson Zhao Lijian said at a news briefing.

(Zhao Lijian is the same Chinese official who, in order to shift blame away from China for its mishandling of the outbreak, promoted the conspiracy theory that the US military may have brought the coronavirus to Wuhan.)

All countries, not just China, have faced legitimate difficulties in reporting statistics as hospitals and officials deal with a fast-moving health emergency and a novel virus. New York City also revised up its death toll by thousands this week, including people who died at home without a coronavirus test but likely succumbed to the disease. Italy, too, has said it might be undercounting deaths.

But when it comes to China, these new figures will only fuel suspicions that China has tried to hide information, especially given its lack of forthrightness in the early stages of the pandemic.

Brazilian President Jair Bolsonaro has consistently downplayed the coronavirus threat in his country. He hosted a huge rally in March. He has tried to undermine states that have imposed social distancing restrictions to protect their citizens by telling everyone to just go back to work.

“We have to face this virus, but face it like a man, dammit, not a boy,” Bolsonaro said in early April. “We have to face it with reality. That’s life. We’re all going to die someday.”’

Through it all, coronavirus infections have continued to rise in Brazil, with the country now registering more than 30,000 cases and nearly 2,000 deaths — although Bolsonaro has questioned those statistics, accusing governors of manipulating the data for political ends.

All of this put Bolsonaro’s health minister, Henrique Mandetta, in a truly awkward position.

Mandetta is a doctor who’s become popular in the country for trying to communicate the real risks of the coronavirus to Brazilians. He’s encouraged social distancing measures and backed up the states in discouraging gatherings and curtailing business. And he’s tried to convey all of this information while navigating his boss’s misinformed talking points.

Which, uh, may sound familiar to anyone who has been following the trials and tribulations of Dr. Anthony Fauci, the director of the US’s National Institute of Allergy and Infectious Diseases and a key member of the White House’s coronavirus task force. And sure enough, as Bolsonaro is often compared to Trump, Mandetta has been compared to Dr. Fauci.

In an interview on Sunday, Mandetta basically called out his boss, saying that he “hoped we can speak with a single, unified message, because otherwise Brazilians end up doubting.”

“They don’t know whether to listen to the health minister [or] the president. Who should they listen to?” he added.

It seems Bolsonaro finally had enough of Mandetta contradicting him, and on Thursday Bolsonaro fired him.

And many Brazilians are angry. People had already been protesting daily against Bolsonaro’s handling of the crisis, but after Mandetta’s axing, they erupted, with people banging pots and shouting “Bolsonaro murderer” from their windows, according to the Financial Times. Brazil’s leftist former president Luiz Inácio Lula da Silva accused Bolsonaro of leading the country “to the slaughterhouse.”

Mandetta will be replaced by Nelson Teich, an oncologist who had been working as partner in a medical service consulting firm, according to the Guardian.

If you’re a nun in Spain, sports are not canceled.

Nuns playing basketball at a monastery in Sevilla, Spain while sheltered in place for the coronavirus. Hoops makes the world go around.pic.twitter.com/53oKV5GnNU

Every day at Vox, we aim to answer your most important questions and provide you, and our audience around the world, with information that has the power to save lives. Our mission has never been more vital than it is in this moment: to empower you through understanding. Vox’s work is reaching more people than ever, but our distinctive brand of explanatory journalism takes resources — particularly during a pandemic and an economic downturn. Your financial contribution will not constitute a donation, but it will enable our staff to continue to offer free articles, videos, and podcasts at the quality and volume that this moment requires. Please consider making a contribution to Vox today.