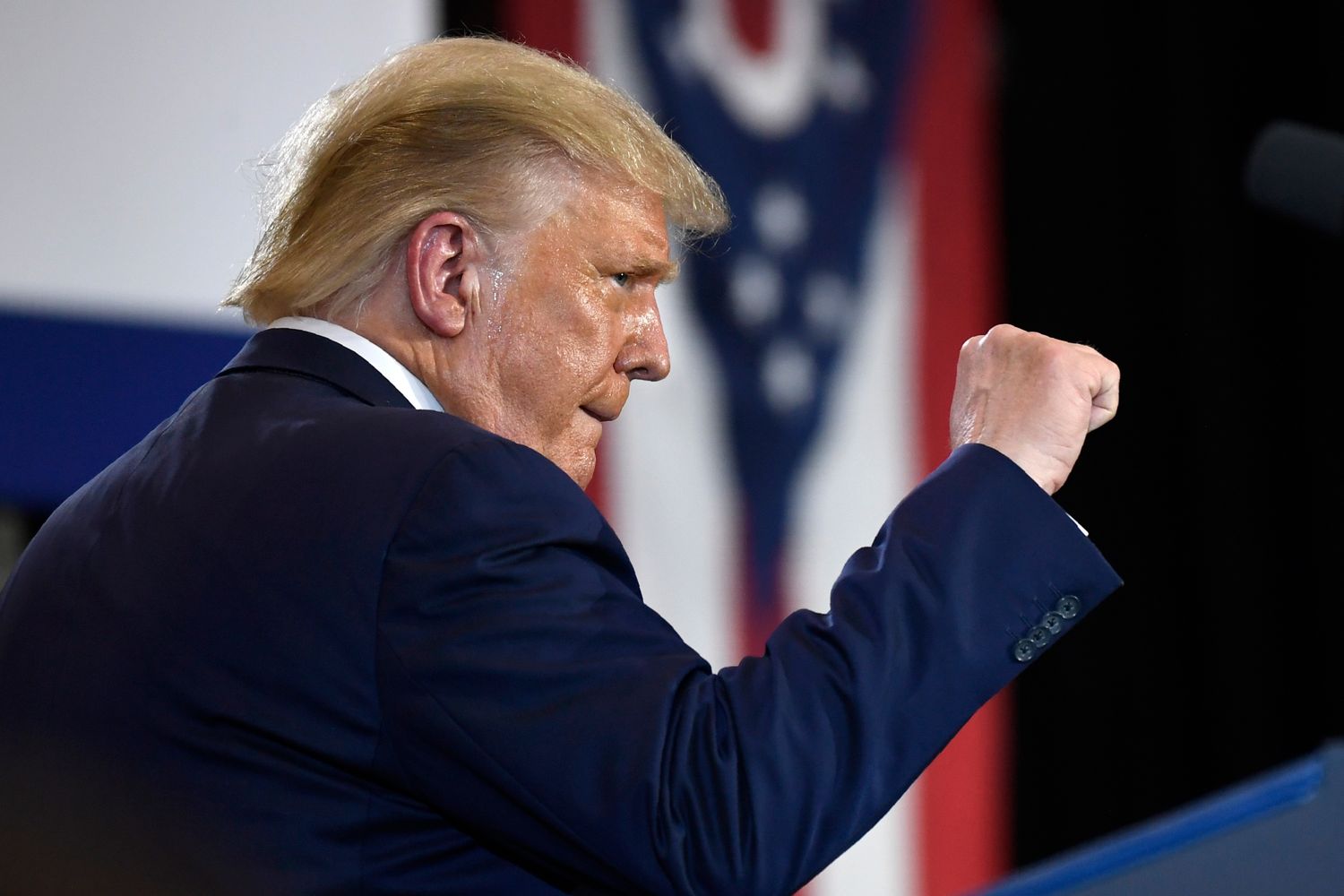 CLYDE, Ohio — In 2020, Joe Biden has caught up to President Donald Trump in Ohio without even setting foot in the state.

On Thursday, Trump made his Ohio counterattack — briefly moving his presidential platform to the state itself.

Taking a break from his typical pandemic-focused travel, Trump spent the day jetting around Ohio, holding a fundraiser outside Cleveland, touring a manufacturing plant in Clyde, Ohio, and trumpeting a “Buy American” initiative throughout.

The sudden flurry of Ohio activity is part of a reinvigorated effort to shore up Trump’s standing in the state ahead of November. No Republican has ever captured the presidency without claiming Ohio, and in recent months, the dual crises of a global pandemic and nationwide unrest over racial injustice have suddenly put the state in play for Joe Biden, Trump’s 2020 rival.

The Trump campaign has already announced an $18.4 million fall TV ad buy in the state — its largest ad blitz outside of Florida. And now the president is using the platform of his office to make his pitch to Ohioans.

From a podium in front of Marine One, Trump on Thursday made rally-like brags about the economy and campaign-style attacks on Biden as a group of supporters cheered him on.

“Biden’s policies are China first and America last,” Trump said, predicting the market would crash under a Biden presidency. Not only that, Trump insisted without explanation that Biden’s America would have “no religion, no Bible. He’s against God. He’s against guns.”

As for Ohio, Trump predicted: “We’re going to win bigger in Ohio now than four years ago.”

Absent was much talk about the coronavirus pandemic, which continues to grip the nation. In a sign of just how extensively the disease has infiltrated the country, Ohio’s Republican Gov. Mike Dewine had to scrap plans to greet Trump after testing positive for Covid-19 Thursday morning. DeWine is the second governor known to have contracted the virus.

In 2016, Ohio was vital to Trump’s surprise victory. The reality TV star captured the state by a comfortable eight-point margin over Hillary Clinton, helping propel him to the White House. After entering the Oval Office, Trump continued to prioritize the state. He has made 16 trips there during his time in office, and chose to hold his first formal reelection campaign in Toledo, Ohio, in January.

“They continue to visit here because they know they’re in trouble here,” said David Peppers, the chairman of the Ohio Democratic Party. “We’ve been saying that for a year and a half, but that’s now playing out in the polls.”

While Democrats have become increasingly hopeful they could win back Ohio in November, Biden has yet to visit the state, as he has remained mostly at his home in Delaware during the pandemic. Still, his campaign is spending millions of dollars on ad buys in the state, including it as part of a $280 million fall advertising barrage across 15 states. And Democratic operatives insist they’ve seen gains in both major Ohio cities and the state’s suburbs.

“We’re putting in the work to win Ohio, because whether they voted for Donald Trump or not, families and workers across our state are feeling the impact of his failed leadership and broken promises,” said Toni Webb, the Biden campaign’s Ohio state director.

Trump’s supporters in the state expressed confidence that once the GOP starts making a more focused pitch to Ohioans, especially one that explicitly compares Trump to Biden, the president will pull ahead.

“We need to do a better job of drawing a sharp contrast and defining Joe Biden,” said Corry Bliss, a Republican strategist who has advised on races in Ohio.

Bliss said frustration is to be expected in the state, given the pandemic and lethargic economy it has created.

“I think voters there understand there’s been a slow, steady decline and it won’t be fixed overnight,” he argued. “But they see he’s been willing to stand up to China in a way Democrats never have, and he has street credibility for that.”

Trump’s aides argue that the president’s team has been laying the groundwork in Ohio for years.

“We never took Ohio for granted,” said Dan Lusheck, Ohio press secretary for Trump Victory, the joint effort between the Trump campaign, the RNC, and the Ohio Republican Party.

Lusheck pointed to Trump’s numerous trips to the state during his presidency as evidence of the president’s consistent attention to the state. Trump, Lusheck said, is “invested in the people here and he knows it’s going to be an important state as we close in on November.”

While Thursday’s activities were ostensibly not campaign related, Trump repeatedly veered into his typical rally patter, as he does in almost any setting. At the manufacturing plant, which makes washing machines for the home appliances company Whirlpool, Trump spoke for almost an hour, evenly splitting his time between scripted policy remarks and unscripted asides.

On the policy front, Trump revealed the reimposition of a 10 percent tariff on some Canadian aluminum products and vaguely promised a “very important” initiative in the coming week on “fairness and trade,” without offering specifics. And he stumped for an executive order he signed Thursday morning that calls on federal agencies to purchase “essential drugs” and medical supplies made in the U.S.

On the politics front, Trump ran through now-familiar jabs about Biden.

”Do you ever watch Biden?” Trump jokingly asked. “He’s always saying the wrong state. … There’s something going on.”

On the musings front, Trump renewed his grievances with modern water pressure — “You turn on the shower, if you’re like me, you can’t wash your beautiful hair properly” — and fondly recalled pre-LED light bulbs — “I like it because I don’t look so orange.”

And there was a new Trumpian mispronunciation, when Thailand came out as “thigh-land.”

It was the typical brew Trump normally serves up at his campaign rallies, which have been put on hold because of a nationwide resurgence in coronavirus cases. Instead, Trump has started to use official presidential events like Tuesday’s tour through Ohio to make his campaign pitch in states he hopes to carry to win reelection in November.

Sign up today to receive the #1-rated newsletter in politics.

Bliss, the GOP strategist who works in Ohio, argued that it’s the right strategy for the state. Trump’s trip to the Whirlpool plant was meant to highlight his administration’s attempts to create manufacturing jobs in American. Whirlpool says Trump’s 50 percent tariff on imported washing machines helped the Clyde factory add 200 jobs.

“The world is going through Covid, and it’s a tough time economically, but a lot of people give the president credit for where we were pre-Covid, for standing up for manufacturing jobs, and for being a hardass on China,” Bliss said.

Research from economists at the University of Chicago and the Federal Reserve has shown, however, that the washing machine tariffs also significantly raised prices for consumers. And while the study estimated the move created about 1,800 new jobs, each job came at an average additional cost of over $815,000 per year for Americans.

Regardless, Trump and his supporters evince only complete confidence in the president’s chances in Ohio come November.

“He’s going to win Ohio, but it will not be by the same margin” as 2016, Bliss said. “What does that mean for the states around Ohio? That is the real question.”