Despite poor showings against his Democratic rivals in national polls, President Donald Trump appears deadlocked with his potential opponents in a handful of pivotal states about a year before the 2020 presidential election, according to new surveys.

In hypothetical races in six states that could decide whether the president wins another term in the White House — Michigan, Pennsylvania, Wisconsin, Florida, Arizona and North Carolina — Trump mostly trails former Vice President Joe Biden, but fares better against Sens. Bernie Sanders and Elizabeth Warren, according to New York Times/Siena polls. The surveys signal those states could swing either way: Nearly every lead in the poll falls within the survey’s margin of error.

Here are the poll results in the potential 2020 races, which the Times separated into registered voter and likely voter samples: 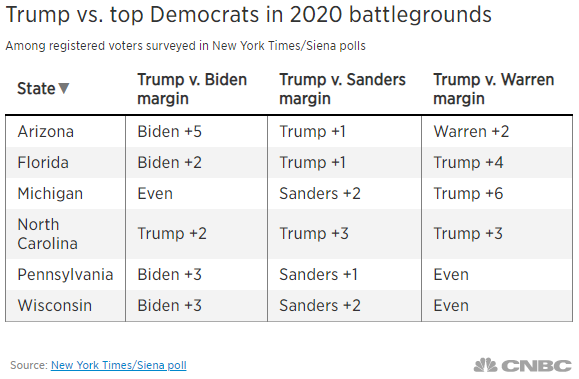 The polls underscore one perception that Trump, buoyed by a strong economy, enters the election year in a strong position to compete in the Electoral College despite a relatively low approval rating. The result comes only a day after an NBC News/Wall Street Journal poll found Biden and Warren leading Trump by 9 and 8 percentage points, respectively, nationwide.

A poll this far from the election can only say so much. Developments in the coming months such as Democratic primary contests, the House impeachment inquiry into Trump and economic trends could shift general election survey results. In addition, Biden, Warren and Sanders appear to be in better position in hypothetical matchups against Trump in those six swing states, according to RealClearPolitics polling averages.

Biden, Warren and Sanders have established themselves as the top contenders for the Democratic presidential nomination in the vast majority of national and early state primary polls. The shape of the race could change drastically, though, before the first state nominating contest in Iowa in February.

Biden, considered a more centrist choice than Sanders and Warren, has made his potential to compete against Trump in swing states a core argument for his campaign.