Trump ripped CNN’s Carl Bernstein as a “nut job” on Tuesday after the famed Watergate reporter labeled him a “homicidal president” for holding an indoor rally amid the coronavirus pandemic.

“I mean, I know Carl Bernstein a little bit, he’s a nut job. He’s been a nut job for many years,” Trump said Tuesday morning during a live phone interview on “FOX & Friends.” 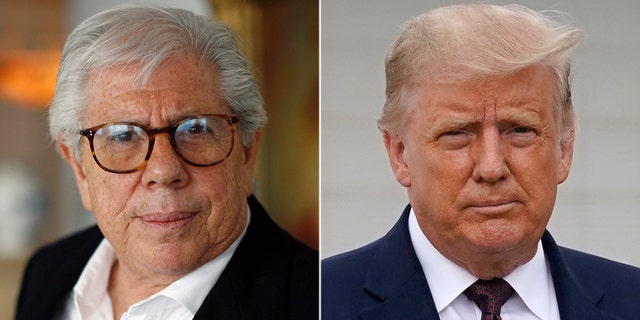 CNN’s Carl Bernstein is as a “total nut job,” according to President Trump.

“I don’t have a lot of respect for either of them, frankly,” Trump said, referring to Bernstein and his Watergate reporting partner Bob Woodward.

“He was a total nut job and I see him,” Trump continued. “He’ll say anything. No matter what you did. Like today, I’m doing a great deal with Israel… no matter what you do, with some of the fake news, it doesn’t make any difference.”

Trump then spent a moment condemning the mainstream media for not spending enough time reporting that he was nominated for a pair of Nobel Peace Prizes before returning to his thoughts on Bernstein.

“Carl Bernstein is a dummy. He’s a dumb guy and Woodward’s book, last night I read it, it’s like lightweight reading and he doesn’t get it. When my policies turn out to be right, as they have… the [Woodward] book was really boring, I have to tell you,” Trump said.

Trump was irked by comments Bernstein made on CNN’s “Anderson Cooper 360″ on Monday night when asked about Trump’s decision to hold indoor rallies.

“Let’s be very clear in what we’re looking at here, we are witnessing a homicidal president convening, purposefully, a homicidal assembly to help him get re-elected as President of the United States instead of protecting the health and welfare of the United States, including supporters whose lives he is willing to sacrifice,” Bernstein said.

WHY DID THE WASHINGTON POST SIT ON BOB WOODWARD’S TRUMP RECORDINGS?

“Here is this president, who staked part of his presidency on the right to life particularly of the unborn, and every day he has sacrificed the lives of thousands of Americans because he is unwilling to deal honestly, forthrightly meaningfully with the gravest domestic crisis in our post-war history in this country,” Bernstein continued. “He’s abdicated his responsibility and the result is the most grievous felony committed by any president in our history, probably, and now we see it in front of us tonight, this homicidal assembly that the President of the United States has called his supporters to be sacrificial lambs. It’s astonishing.”

As for the other half of the famed “Woodward and Bernstein” reporting duo, Trump is bothered that Woodward’s upcoming book “Rage” paints him in a negative light.

Trump spoke with Woodward 18 times and the author has been slowing revealing audio clips from their conversations that have resulted in Trump getting criticized for his response to the coronavirus pandemic.

Woodward has also been criticized for not releasing the audio sooner, but maintains he did nothing wrong.

Biden says if Trump acted sooner on coronavirus 'all the people...