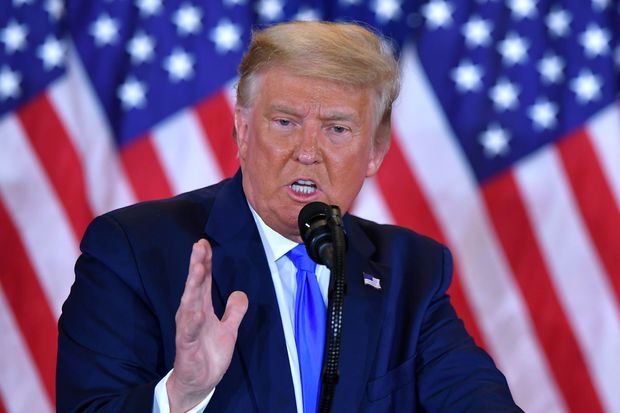 President Trump continued to attack the integrity of the U.S. election system Wednesday on Twitter, focusing his ire on the ongoing hand recount of ballots in Georgia, where an initial tally showed him losing to President-elect Biden by 14,163 votes, or 0.3%.

“The Georgia recount is a joke and is being done UNDER PROTEST,” the president tweeted Wednesday morning, alluding to two instances in which Georgia counties found roughly 5,000 votes that had not been included in the original count.

Gabriel Sterling, the Republican voting systems implementation manager for the state of Georgia said that the addition of these votes would reduce Biden’s lead to about 13,000, according to the Associated Press.

The president also tweeted what he said was a video of election officials continuing to conduct its recount in Floyd County, one of the two that miscounted its votes.

Georgia law dictates that the Secretary of State, Republican Brad Raffensperger must certify the results of the election by Friday, Nov. 20. After the results are certified, and if the margin of victory remains under 0.5%, the Trump campaign can request another recount of votes, this time tabulated using scanners.

Federal election law requires states to make their election results official, and send them to the Archivist of the United States, by Dec. 8, and for presidential electors in each state to formally cast their vote on Dec. 14.

The state has been beset by Republican infighting in the weeks following the presidential election after it appeared that Joe Biden would be the first Democratic presidential candidate to win the state since Bill Clinton in 1992. The president has kept up pressure on his party to maintain a narrative that election fraud prompted his loss, though there has been no evidence of illegal voting anywhere near the scale needed to overturn Biden’s lead in Georgia and other battleground states.

This dynamic led to Georgia’s two Republican candidates for the Senate, Sen. Kelly Loeffler and David Perdue, to demand Secretary of State Raffensperger’s resignation, while the president himself has attacked Georgia’s Republican Governor Brian Kemp for not doing more to limit mail-in voting.

The president falsely claimed that a legal settlement reached between Kemp and Georgia Democrats in March prevented election officials from verifying the identities of mail-in voters through signature matching. In fact, the agreement simply required county election officials to give voters more advanced notice that their ballot was rejected because of a signature mismatch or other missing information, so that they could fix those mistakes.

According to Secretary of State Raffensperger, state law requires that every ballot is verified by signature matching. Ballot recounts, however, cannot involve reverifying of signatures, because signed ballot envelopes are not stored with their respective ballots to protect the secrecy of citizen’s votes, in accordance with the Georgia Constitution.

: The Trump administration may privatize Fannie Mae and Freddie Mac — and it could disrupt the nation’s housing-finance system

: How to shop safely this Black Friday with coronavirus cases continue to surge

Outside the Box: 7 ways to go from the military to...