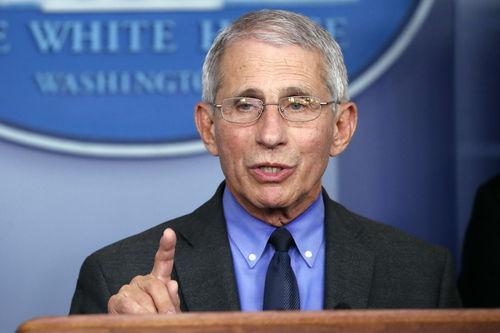 Dr. Anthony Fauci, the leading public health expert on the White House’s coronavirus task force, believes there is a way sports could be back later this year.

In an interview on the Snapchat show “Good Luck America,” Fauci told host Peter Hamby he could see the NBA, NFL and Major League Baseball returning sooner rather than later, provided they are not playing in front of crowds.

“There’s a way of doing that,” Fauci said. “Nobody comes to the stadium. Put them in big hotels, wherever you want to play. Keep them very well surveilled. Have them tested like every week. And make sure they don’t wind up infecting them or their family and let them play the season out.”

The NFL draft is next week, but the 2020 regular-season isn’t scheduled to begin until Sept. 10, and the league’s full week-by-week, team-by-team schedule isn’t set to be released until May.

New Orleans mayor LaToya Cantrell recommended Tuesday that all large festivals in the city be pushed back for 2021, but she came short of recommending the same for New Orleans Saints games.

Asked specifically about the Saints, who play their home games in the 76,000-seat Mercedes-Benz Superdome, Cantrell said the NFL as a whole is struggling with those decisions.

The Saints and Pelicans said Tuesday they were aware of Cantrell’s comments.

“We are preparing to play and we are being very proactive in working with healthcare professionals, our medical staff and both the NBA and NFL,” said Greg Bensel, the Saints and Pelicans’ senior vice president of communications. “In addition, we are in constant contact with local and state government. When we return this season, our highest priority will be health and safety of our fans, staff, players and coaches. It is what we need to do and are doing relative to planning to play and we will be ready.”

Bensel added that the economic impact of Saints games is important.

“And considering the economic and cultural significance of the Saints, we are working to do everything in our power to make it work. It’s too important for our city.”

The NBA regular season was suspended March 11, and later that month, ESPN reported the league was exploring the possibility of holding games at a central location, where players would “sleep, train, eat and, hopefully, be kept healthy enough to have confidence in resuming play.”

Become a Pelicans insider: Sign up for our e-mail newsletter!

The Pelicans were among a pack of teams jockeying for the Western Conference’s final playoff spot before play was suspended indefinitely March 11. They had 18 games to make up the 3½-game difference between them and the Grizzlies, who are in eighth place.

“We’re really all hoping there is an opportunity for us to sort of finish the season and try to make the playoffs in some way, shape, or form,” Pelicans shooting guard JJ Redick said on the Pelicans Podcast in early April. “The league is talking about all sorts of possibilities. From what I understand, I really think anything is on the table right now in trying to figure out how to finish the season. But, we’re in a situation, as I said kind of earlier, where there’s no easy answers.”

Last week, NBA commissioner Adam Silver said the league would not provide any updates about returning to play until May 1 “at the earliest.”

“Initially, through the first week, two weeks, we were looking at more specific scenarios,” Silver said. “If we start this date, what would it mean for the regular season? When would the playoffs begin? When would they conclude? And, again, what I’ve learned over the last few weeks is we just have too little information to make those sort of projections.”

If and when the NBA season resumes, players will need time to get back into shape. They are not allowed inside team practice facilities, which means if they want to work out, they must do so at home. Many players don’t have access to hoops.

The Pelicans are doing what they can to keep players in shape by holding workouts via Zoom five days a week. But there is no substitute for playing 5-on-5 basketball.

“I think there would be a pretty unanimous sentiment that the longer we’re out, the longer we’re going to need,” Pelicans executive vice president David Griffin said. “But I would hope that we would be able to model something like an offseason, (where) the (training facilities) are open for an informal period of time, let’s call that two weeks, and then two weeks of a training camp that would lead into game play.”

If games are played in empty stadiums, Fauci predicted there will still be a healthy appetite for them. He admitted he misses seeing his hometown team play.

“People say you can’t play without spectators,” Fauci said. “I think you probably get enough buy-in from people who are dying to see a baseball game, particularly me. I’m living in Washington. We have the world champion Washington Nationals. I want to see them play again.”