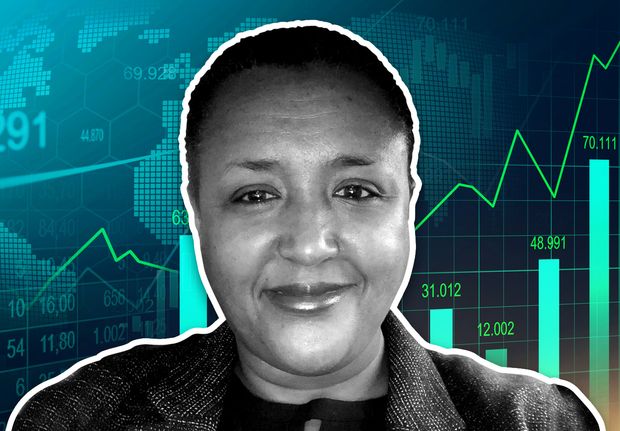 Lule Demmissie is the president of Ally Invest, an online brokerage and wealth management platform.

Lule Demmissie is no fan of zero-sum game theory as an investment thesis — or in life.

Wall Street likes to remind us that no matter how big the financial gain or how steep the loss, there are always two sides to every trade, a winner and a loser. Sounds fair enough.

But Demmissie, the president of the stock-trading platform Ally Invest, thinks that seeing the world through a win-lose lens can mean ignoring racism in the economy and in finance — and also not seeing what’s possible.

“I have a very interesting vantage point in the sense that I sit at that intersection of a demographic that’s the change that’s coming,” Demmissie told MarketWatch, speaking not only as a Black immigrant woman born in Ethiopia who has a leading role in finance, but also as a gay American.

Ally Invest, the brokerage arm of Ally Financial ALLY, -0.63%, is a popular investing platform with millennials, even more so during the pandemic as trading activity by individuals has soared. Ally said brokerage accounts at Invest grew 16% in the third quarter from a year prior, while customer assets ended the quarter at $11.1 billion.

MarketWatch spoke with Demmissie for The Value Gap, an interview series about the economic dimensions of inequality and racism. Here are highlights from the interview, which has been edited for clarity:

MarketWatch: The Federal Reserve controls money, but also is a repository for some of the best data available on the U.S. economy, including about jobs, wages, debt and wealth in America. The Fed also tracks who owns stocks in America by race. It found that while 60.8% of white families owned stocks in 2019, only 33.5% of Black families and 24.1% of Hispanics owned them. Is that depressing? 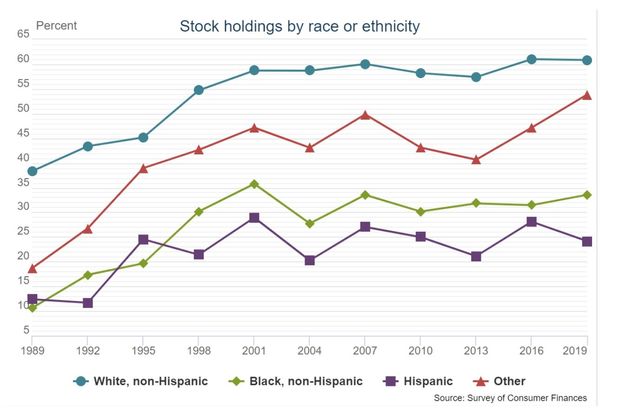 Stock ownership by race as of 2019

Demmissie: No, not really. It should motivate us. I can tell you that as a person who came to this country with nothing in my pocket, it challenges, motivates us. It’s the lack of knowledge that should depress us. Any light that gives us transparency is motivational. I think the intelligence around money and who owns it and who drives it is really important.

Some of the most important insights that I’ve gotten out of the Fed’s data is that we’re seeing uneven economic outcomes, even when you add education as a determinant. If your hypothesis is that there’s racial inequality because there’s a lack of education, you can filter for that.

“ ‘There’s something about diversity that leads to dynamic idea generation, the ability not to be tone deaf, the ability to catch each other’s blind spots.’ ”

But Black or brown people often don’t have uncles and aunts, or what I call a “shadow network,” to help them rise. Now, let’s just look at people who are educated, who have bachelor’s degrees, but also happen to be Black and brown. Then look at those with advanced degrees who happen to be Black or brown. In some cases, they have one-fourth the wealth of a white worker. In some cases, they have one-sixth the wealth, depending on which degree you’re looking at.

When you look at it through that lens, there’s a structural problem. It’s not just about education and access.

MarketWatch: If we want to close the inequality gap in America, and if Wall Street is representative of the economy at all, what do we do to narrow the wealth gap from an investing standpoint?

Demmissie: First of all, it’s not going to happen just with one industry, one people or one firm. This is a multifaceted problem. What we have to start out doing is to sort of adjust our mental mind frame as individuals. It’s also going to take managerial courage for anybody who has power. Because at the end of the day, what you have to understand is that there is no singular answer. Unfortunately, there isn’t.

So the way I look at it is, you look at the lane that you influence. And then you say: What part of this mosaic can I fix? The key is both in understanding the piece of the mosaic you can influence, and then what accountability structures you put around it. It takes a lot of managerial courage.

At Ally Invest, the process is threefold. One, how do I shape the teams I have on the bench and the people that create products and services? There’s something about diversity that leads to dynamic idea generation, the ability not to be tone deaf, the ability to catch each other’s blind spots.

Secondly, how do we bring investments to regular people in ways that reduce the thresholds so that they can get in and engage? That brings education to the forefront, including conferences or content that’s accessible to read. But also it’s about bringing in voices that are Black and brown into the conversation, including advisers and financial specialists. Because part of it is that you cannot be what you don’t see.

I tell people to hold yourself accountable. Just check out your LinkedIn profile. What percentage of your network is diverse? Yeah, because I guarantee you, when you’re about to recommend somebody as a hire to somebody, you’re going to go there anyway. Start enriching the diverse nature of that composition early. That’s the shadow network I’m talking about.

MarketWatch: Let’s talk about challenges you’ve faced. What’s the worst question you’ve ever had in an interview? And how did you overcome it?

Demmissie: Over a career, there’s so much scar tissue. I don’t know if I remember the biggest obstacle. I look at obstacles as another challenge to keep refining my game. They don’t scare me. But I’d say at the beginning, it was so different to have somebody who looked like me talk about asset allocation and investing. The bigger challenge was finding my identity, and being natural for this space that we’re in. And that was as much about my head as it was theirs.

MarketWatch: What’s your advice to a young person, a Black or brown person, getting out of college at this moment, whether it’s in financial services or not?

“ ‘There’s no room for me to be weary. There is no room. That’s true whether you are doing investing, or whatever plan you have for your life.’  ”

Demmissie: I advise young people all the time. I probably have something like four or five people reach out to me on LinkedIn almost every week, and I religiously get back to them and I’ll set aside 15 to 20 minutes. This is how I build my shadow network. The first advice I’d give them is, there’s no hiding. People see who you are, so you might as well get started in practicing that and being great at who you are.

I tell people to practice failing. Even now, right — you know this idea of intelligent failure? It’s the opposite of the idea of trying to trim your ability to fail. We waste so much time to trim, trim, trim, that we don’t lean in or get the wisdom of whatever that experience is and move on.

MarketWatch: What would you say to the investing community about the future, particularly at a time when the nation remains so divided and there’s plenty of animosity toward Wall Street?

Demmissie: I tell people all the time that I came to an America where people like [the late civil-rights icon and statesman] John Lewis took a thumping over the head to get me the rights that I have. There’s no room for me to be weary. There is no room. That’s true whether you are doing investing, or whatever plan you have for your life.

Also read: Mehrsa Baradaran, author of ‘The Color of Money,’ on why giving people civil and political rights isn’t enough

So people cannot feel weary by it; they cannot feel cynical about Wall Street. Start to learn about investing for your family’s long-term wealth.

MarketWatch: What about people who already are sitting there holding the majority of all stocks? What would you say to them, about the people coming up behind them? Is there room, or is it zero sum?

There is room in this tent. It is big.

The Moneyist: I gave my daughter $20K to start a company with her husband. They divorced and he got the business. Can I ask...

The Moneyist: ‘Thanksgiving dinner doesn’t need two headless chickens fighting over the soul of the nation’: If you must talk politics, read these rules...

Key Words: Dr. Fauci on Cuomo’s decision to review vaccines for New Yorkers: ‘Trust the process because it is a sound process’

: Fund managers are believers in the rotating-to-value trade, latest Bank...