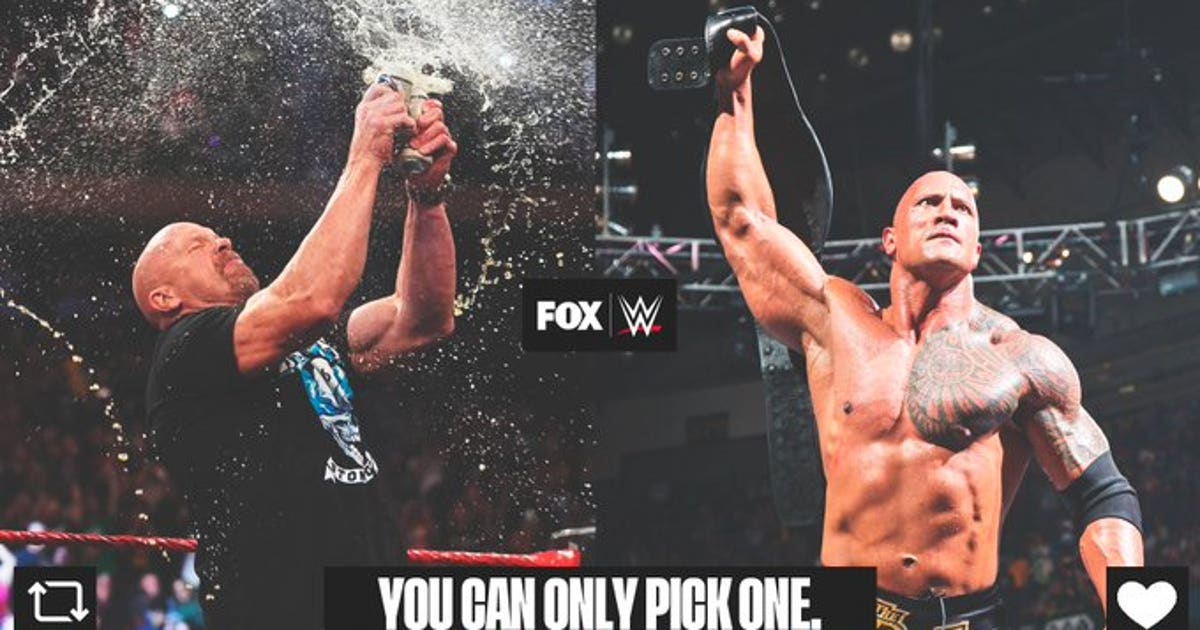 They’re two of the greatest professional wrestlers of all time. But if you had to pick one, who would you choose: Stone Cold Steve Austin or The Rock?

It’s a question @WWEonFOX recently asked the WWE Universe — and one The Rock himself saw fit to answer.

In wrestling? Easy answer; when I was 15 (broke & evicted) this man let me live with him in Nashville 🙏🏾
Downtown Bruno.
Most don’t know who Bruno is but a few do.
My brother @steveaustinBSR comes in a very close 2nd 🤣
Cheers to life’s wild and unpredictable journey 🍻#goat https://t.co/quc12kXqys

That’s quite a gracious response, and there really isn’t a wrong choice. No one was more responsible for professional wrestling reaching the heights it did in the late 90s and early 00s than these two legends.

(Quick aside: the “Downtown Bruno” Rock mentioned is better known to WWE fans as Harvey Wippleman, a manager in the 80s and 90s, who helped Rock when he was down on his luck as a teenager.)

During arguably the most important stretch in WWE history — from Austin’s first world title win at WrestleMania XIV in 1998, to their first WrestleMania meeting the next year at WrestleMania XV — The Rock and Stone Cold combined to hold WWE’s heavyweight title for 268 of 364 days.

On this day 20 YEARS AGO, @steveaustinBSR and @TheRock clashed for the first time at @WrestleMania! pic.twitter.com/3PiyLVnbNa

The ascension of these two Hall of Famers came with WWE in the midst of a war. For 83 straight weeks, starting in June 1996, WWE had been losing to its rival, WCW, in the head-to-head television ratings.

Less than a month after that WrestleMania XV match, however, WWE beat WCW for the first time in nearly two years and began to reclaim its spot atop sports entertainment. (Two years later, WWE would buy WCW, officially ending the “Monday Night Wars.”)

“You represented the enemy.”@steveaustinBSR and @Goldberg dig in to the Monday Night Wars on a new #BrokenSkullSessions streaming THIS SUNDAY immediately following #WWETLC on WWE Network. pic.twitter.com/ApAB6gdWKB

Their catch phrases — “And that’s the bottom line, ’cause Stone Cold said so!”; “If you smellllll what the Rock is cooking,” — transcended the pro wrestling world. So did their celebrity; Austin appeared in the ring with Mike Tyson, while The Rock took over Hollywood.

And the feud between the two gave us some of the most iconic moments of all time, like Stone Cold dousing Rock and the McMahons in beer from a truck he drove to the ring in the build up to that first title match:

The Rock and Stone Cold would clash at three WrestleManias — XV, X-7, and XIX, which was Austin’s final in-ring match — and each was an absolutely epic event. Earlier this year, Mark Henry, Booker T and Renee Young relived that final bout on WWE Backstage:

Speaking of epic events, Sunday was the 22-year anniversary of another seminal moment in WWE history from the same era: The time the Undertaker threw Mankind off the roof of Hell In A Cell, leading to one of the most memorable announcer calls in all of sports.

“With God as my witness, he is broken in half!”

THAT #HellInACell match between Mankind and @undertaker happened 2️⃣2️⃣ years ago today.

Which do you think of first? pic.twitter.com/lB7qsbdDAL

It’s a line you’ll often hear dubbed over a particularly big hit — as we can attest:

As for The Rock and Stone Cold? Quick as the former was to sing the praises of the latter, trying to pick just one is a seemingly impossible task. So instead, head over to Twitter and let us know who’s on your WWE Mount Rushmore:

That way, you can talk about Rock, Austin, Taker, Mankind, Hulk Hogan, Ric Flair, and many, many more.

And if this all has you feeling nostalgic, check out the greatest moments in Austin’s career:

And the funniest moments in The Rock’s:

How two-time Olympic champ Robeisy Ramirez has adjusted after his disastrous...

Best player to wear each number for the Timberwolves, part 1...