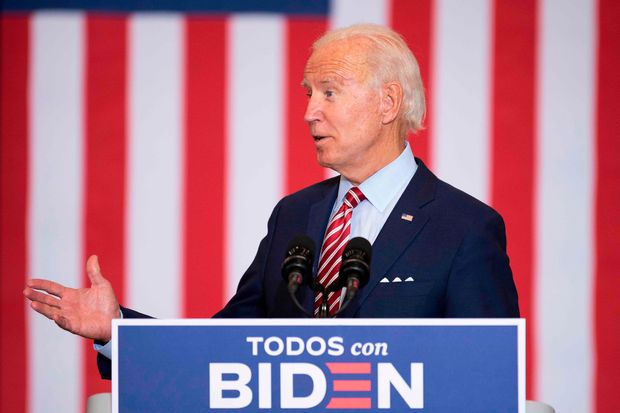 Joe Biden steps up to the microphone, presses play and starts bobbing his head to the beat of NWA’s controversial rap hit “F— tha Police.”

President Trump got such a kick out of it — or perhaps thought his base would actually believe it — that he shared it twice with his 86 million Twitter TWTR, +2.60% followers

Twitter slapped a “manipulated” tag on the clip, but that didn’t stop Trump from repeatedly posting the video on Wednesday to the delight of many of his fans.

Here’s the song Biden actually played at the event:

Clearly, the edited clip was meant to mock Biden in the face of accusations levied against the former vice president for allegedly backing measures to defund the police.

Here’s an example from back in July:

Biden has said the claims are false.

Trump’s most recent attacks on Biden are part of a broader disinformation campaign across social media on behalf of the president.

: The NFL fines coaches and teams a total of over $1 million for not wearing face masks during games in week 2

Election: When is the first Trump and Biden debate?

The Margin: How to do Halloween safely during the pandemic: no trick-or-treating door to door or wearing costume masks

Market Extra: Why these strategists say at least $500 billion more...