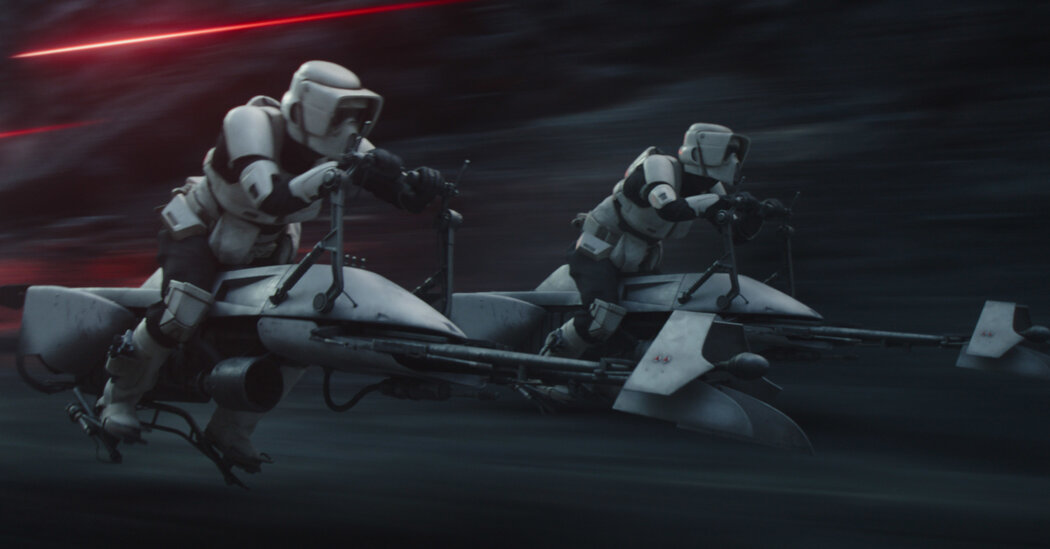 The latest chapter of “The Mandalorian” is practically a greatest hits of “Star Wars” visual motifs. Do you like high-speed chases through canyons? Big guns fired from rotating turrets? Characters creeping along narrow ledges, perched above steep drops? Long shots of Imperial Star Destroyers flying overhead? Then this week’s episode, “The Siege,” was made for you.

More important, though, this episode features something essential to the success of this franchise, which George Lucas encoded into its DNA from the beginning: task oriented plotting.

The “Star Wars” saga can seem sprawling and chaotic, encompassing dozens of planets, multiple warring factions, and the intricate histories of hundreds of alien races. The movies involve crucial missions, broken up into different components and carried out simultaneously. The complex stories are then usually delivered to the audience through another of Lucas’s staple storytelling tricks: crosscutting between the many subplots and keeping them unresolved for as long as possible, holding audiences in a state of high tension.

Yet, if you look at each of the individual pieces within the massive “Star Wars” mosaic, they’re actually pretty simple. In this week’s episode of “The Mandalorian,” Mando makes an emergency stop back in his old stamping grounds on the planet Nevarro He needs to get his ship, the Razor Crest, properly repaired, and it’s a chance to catch up with his colleagues Cara Dune (Gina Carano) and Greef Karga (Carl Weathers, who also directed this episode).

These two have been bringing order and civilization to what used to be a wretched hive of scum and villainy. But they’re concerned about a nearby Imperial base, possibly containing weapons that could upset the planet’s peaceful balance if the wrong people swiped them.

So now Mando has another job to do. He agrees to help Cara and Greef destroy the base. This may seems like a big ask, but the mission can be easily reduced to a few straightforward stages. This small crew — which also includes Mythrol (Horatio Sanz), the now-reformed criminal that Din Djarin captured in this series’s very first scene — has to break into the base, fight off what they’ve been told will be a small crew of guards and then deactivate the mechanism that holds back the natural flow of lava in the area. The larger reasons they do all of this may be complicated. The actual work is not.

That’s not to say that everything goes well. One reason “the heroes need to go to point A, to complete task B, to accomplish mission C” plotting tends to be entertaining is that when a script clearly outlines the goals, it’s all the more exciting when the obstacles inevitably arise. In this case, Mando and company don’t experience any major issues when it comes to pushing all the right buttons to get the base-demolishing lava moving — although this does require Mythrol to creep out one of those high, thin ledges. No, their problem is that the base itself isn’t as abandoned as they’d been told. To escape, they have to get past not just the Stormtroopers but also skilled Imperial forces on speeder-bikes and in TIE fighters.

This leads to the climactic chase, with the canyons and the turret-guns and all that other fun “Star Wars” stuff. The action sequence ends with a Han Solo-style last-second rescue, courtesy of the Mandalorian, who flees the base and returns with a good-as-new Razor Crest, now capable once again of some serious aerial acrobatics while shooting down the bad guys.

I have only two minor complaints about “The Siege.” Though the many, many callbacks to classic “Star Wars” images are fun, they do make the action this week feel a little over-familiar. Also, this episode could’ve maybe used some of that good Lucas cross-cutting. Specifically, it would have been nice to drop in every now and then on the Child, who spends this week parked in a classroom with other kids — where he makes good use of the Force to steal a classmate’s sleeve of blue macarons.

What else happened to Baby Yoda in school? Did he learn math? Did he have fun at recess? Fans want to know!

Instead, much of the comic relief here comes from Mythrol, a cowardly sort who gripes his way through the raid, complaining about everything from the potential danger posed by the guards to the inadequacy of his own breaking-and-entering tools. (“This is rated for light plumbing and such,” he says of his weak blowtorch.) Mythrol is funny enough, but he’s no Baby Yoda.

Still, Mythrol does prove to be right about the Imperial base, which isn’t an old military outpost but is rather an active experimental lab, connected both to the Empire’s old cloning operations and to the Season 1 villain Dr. Pershing (Omid Abtahi) and his attempt to tap the Child’s high “M-count” blood. (The “M” presumably stands for the most controversial bit of “Star Wars” universe mojo, “Midichlorians”: microscopic life-forms that are linked to Jedi mastery of the Force.)

By end of “The Siege,” the episode opens back up again to the bigger story “The Mandalorian” has been telling. One of the mechanics who fixed the Razor Crest has installed a tracking device, enabling Moff Gideon to get back on the Child’s trail, working toward what one of his Imperial underlings ominously calls “the new era.” Meanwhile, back on Nevarro, Cara Dune gets recruited by the Republic to help continue the fight against galactic oppression that cost Cara her home planet, Alderaan.

All of this will surely affect the show’s plot in the weeks and seasons to come. But there’s no rush. “The Mandalorian” should keep proceeding as all good “Star Wars” properties do: one step at a time.

This is the way: