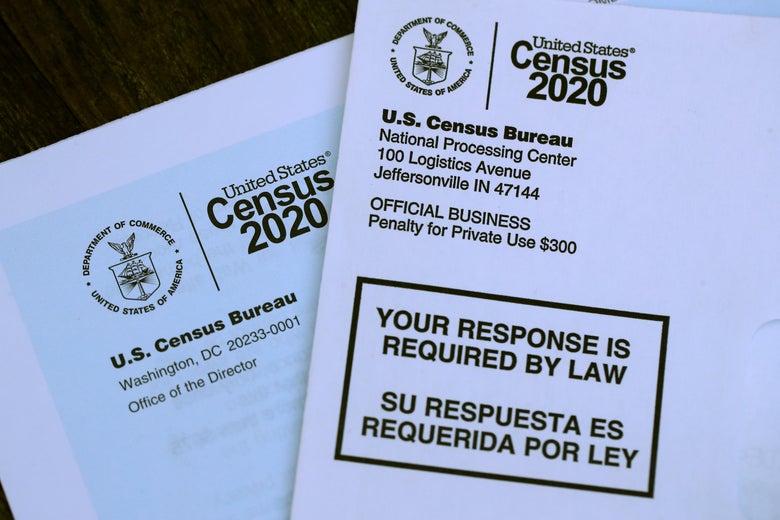 Much to the dismay of civil rights groups, demographers, Democrats, and really anybody with an interest in political fairness or statistical rigor, the Trump administration is now set to bring this year’s all-important Census count to an early end. Thanks to a friendly ruling from the Supreme Court on Tuesday, the Commerce Department will wrap up its tallying process on Oct. 15, two weeks ahead of schedule, as it rushes to get data to Donald Trump so he’ll have time to control the process of deciding how many members of Congress each state will have for the next decade.

Experts have warned that this move will likely lead to a less accurate Census by cutting short the time to track down Americans who are generally harder to reach, such as immigrants and low-income minorities. But the Commerce Department has assured the courts and the public that there’s really nothing to worry about, because the counting effort, it claims, is already more or less complete. This week, the government reported that 99.9 percent of households in the country had already been “enumerated,” to use the Census Bureau’s technical term.

That number is far less informative and reassuring than it sounds, for two main reasons. First, in some parts of the country, a smaller share of households may have been counted than the headline 99.9 percent figure lets on. Second, and perhaps more importantly, just because a household has been counted does not mean it has been counted accurately. And given that the Census Bureau has been on a mad dash to finish its job amid a pandemic, there’s good reason to worry about widespread errors. “The 99.9 percent completion rates is a smokescreen and it is misleading,” says Terri Ann Lowenthal, a Census expert and consultant for the Leadership Conference Education Fund, which has spearheaded this year’s Census Counts advocacy campaign to ensure the count is accurate and fair.

When the Census Bureau says that 99.9 percent of all American households have been “enumerated,” what it means is that the government believes it has counted the number of people living at nearly all of the residential addresses contained in its master list. But some corners of the U.S. may have a lower completion rate than others. According to the Bureau’s most recent update, Louisiana is the worst performer with a 98.4 percent completion rate (the Shreveport area particularly seems to be a problem spot). But some smaller geographic zones like cities and counties could also be behind on reporting. Giving census workers an extra two weeks to track people down in those places could have helped fill in the gaps. Instead, missing households will now have to be added into the final numbers—or “imputed”—using a complicated statistical model that could undercount some families.

The potentially bigger issue, however, is that many households may just have been counted incorrectly—and marginalized groups are especially likely to have been undercounted in the rush to get the Census done.

This year, 66.8 percent of Americans filled out their own response—about on par with 2010—which is considered the most accurate method for counting. Of the remaining third, many were tracked down by a visiting Census worker for a follow-up interview. But others have been enumerated by “proxy,” meaning that if a Census taker knocked on the door and nobody answered, they may have asked a neighbor or a landlord to guess how many people lived in the house. Unsurprisingly, that approach can end in some wildly inaccurate results. The New York Times recently reported on one particularly eye-watering example:

Consider Westlake Village, with more than 3,000 apartments and townhomes south of San Francisco. Counting there has been difficult because building entrances were often locked.

But in late September, an order appeared on the census takers’ government-issued iPhones: Stop interviewing Westlake residents to get details like ages and races, it said; instead, enter an estimate of a household’s occupants provided by the complex manager.

“They only had the names of the people who signed the lease,” said one census taker, who spoke on the condition of anonymity because the bureau prohibits speaking with reporters. “You didn’t know if they had roommates or family — nothing.”

This is also the first year that the Census Bureau has tried to use administrative data, such as tax, Medicare, and Social Security records, to try and count some households that did not fill out their own responses. It’s unclear how well that experiment will work, especially given that those information sources are most likely to miss low-income and immigrant households.

This was a rush job, and we should be wary of it.

In short, assuring us that 99.9 percent of households have been counted in order to end the Census early doesn’t really tell us much of anything about whether the data is any good. But, as the American Statistical Association put it in a report this week, “meeting enumeration goals for a truncated deadline increases the likelihood of operational shortcuts that will jeopardize the quality of the count.” This was a rush job, and we should be wary of it.

Allowing the counting process to continue for another two weeks wouldn’t have erased all of these problems. A lot of the inaccuracies were already baked in before this week, and probably would not have been corrected. But a small amount of extra time could have made important differences at the margins, allowing Census takers to knock on more doors, especially in undercounted areas like Shreveport, and giving more households the chance to send in their own Census forms at the last minute. “A very large number of households have been counted in ways that guarantee errors and inequalities and less quality data that we could have in two or three weeks,” former Census Bureau Director Kenneth Prewitt told me. There’s no reason to believe the administration’s assurances that everything about this year’s count is just fine.

Readers like you make our work possible. Help us continue to provide the reporting, commentary, and criticism you won’t find anywhere else.