Travis County judges Tim Sulak’s order is the latest move in an ongoing saga of lawsuits in state and federal courts challenging the governor’s Oct. 1 order that dramatically reduced the number of places in Texas where voters could drop off mail ballots. The order has most heavily impacted the state’s largest cities, which are primarily Democratic strongholds. 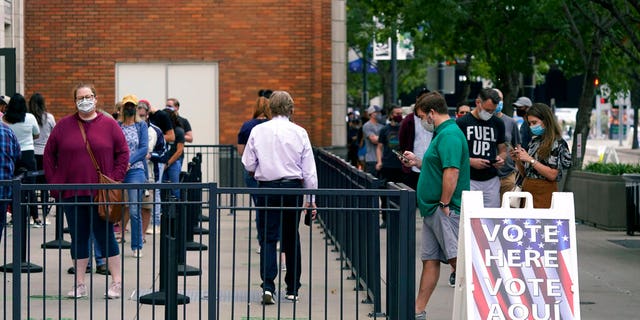 Voters line up and wait to cast a ballot at the American Airlines Center during early voting Thursday, Oct. 15, 2020, in Dallas.  (AP)

Despite Sulak’s injunction temporarily blocking the order, it remained unclear whether the ballot drop-off locations that were shut down from Abbott’s order would be reversed.

“I disagree with the district court’s order and my office has filed a notice of appeal which stays the trial court’s order,” Paxton said.

The ruling was based on the lawsuit, Anti-Defamation League Austin, Southwest, and Texoma Regions vs. Abbott. It was separate from a similar federal court order that reinstated a limit on the number of mail-in ballot drop-off locations in Texas.

The 5th Circuit Court of Appeals late Monday issued a stay of a federal judge’s ruling on Friday that Abbott’s Oct. 1 order is a likely violation of a voter’s right to vote. Early voting started Tuesday in Texas.

“Leaving the Governor’s October 1 Proclamation in place still gives Texas absentee voters many ways to cast their ballots in the November 3 election,” Judge Stuart Kyle Duncan wrote in the opinion. “These methods for remote voting outstrip what Texas law previously permitted in a pre-COVID world. The October 1 Proclamation abridges no one’s right to vote.”

The appeals court noted, however, that the order also provides Texas voters with 40 additional days to vote absentee and that they have many ways to deliver their absentee ballots before Nov. 3, including by hand and by mail.

“These methods for remote voting outstrip what Texas law previously permitted in a pre-COVID world. The October 1 Proclamation abridges no one’s right to vote,” Duncan wrote.

Lee Carter: Biden vs. Trump – at presidential debate both men...

Winter Storm Watch issued October 22 at 2:56AM MDT until October...