Now, after years of detective work, researchers, including those from the original NASA Galaxy Evolution Explorer mission that discovered it, have solved the mystery of the object.
Observations from ground and space-based telescopes helped the researchers determine that the ring was created when two stars merged thousands of years ago. A sun-like star crashed into and consumed a smaller star orbiting it, creating a cone-shaped cloud of fluorescent debris. 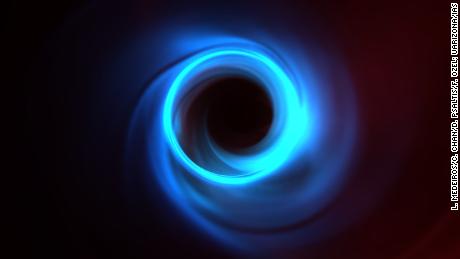 Before being consumed by the sun-like star, the smaller star actually pulled material from the larger one. This created a disk of material around the small star. And this disk acted like a pizza cutter after the stars merged, slicing right through the cloud of debris created by the merger.
The debris also captured gas to create a shock wave, heating up the material and causing it to glow in ultraviolet light.
The slicing caused by the disk caused the stellar merger to send out two cones of debris in opposite directions. Since one of those cones is aimed in the direction of Earth, the GALEX mission observed it as a ring.
The study published Wednesday in the journal Nature.

The ring itself isn’t actually blue, but because we can’t see ultraviolet light, blue was used to identify the otherwise invisible ring in images captured by GALEX. The 10-year NASA mission concluded in 2013.
The discovery of the blue ring presented the GALEX team with a true mystery, recalled study coauthor Mark Seibert, one of the first to identify the object in the GALEX data in 2004.
“Every time we thought we had this thing figured out, something would tell us ‘No, that’s not right,'” said Seibert, an astrophysicist at the Carnegie Institution for Science in Washington, DC, in a statement. “That’s a scary thing as a scientist. But I also love how unique this object is, and the effort that so many people put in to figure it out.” 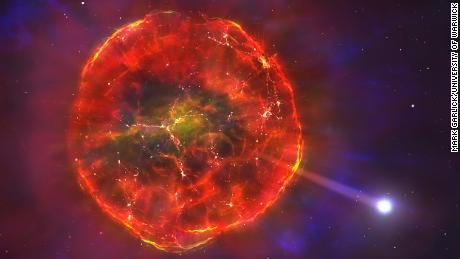 It’s the first time astronomers have glimpsed this rare phase that occurs just a few thousand years after stars merge. It can last for thousands to hundreds of thousands of years. While that may sound like a long time to humans, it’s a drop in the bucket on the astronomical timescale of the universe.
“The merging of two stars is fairly common, but they quickly become obscured by lots of dust as the ejecta from them expands and cools in space, which means we can’t see what has actually happened,” said lead study author Keri Hoadley in a statement. 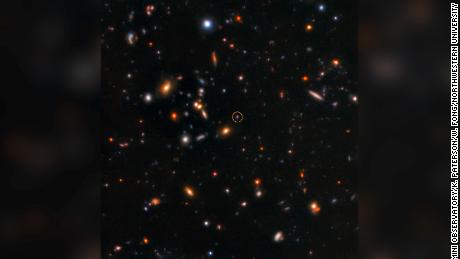 The researchers believe what they observed is a later stage after the dust clears, which allowed them to see it.
“But we also caught the process before it was too far along; after time, the nebula will dissolve into the interstellar medium, and we would not be able to tell anything happened at all,” said Hoadley, the David and Ellen Lee postdoctoral scholar in physics at the California Institute of Technology in Pasadena.
Astronomers used NASA’s Spitzer Space Telescope and Wide-field Infrared Survey Explorer, other infrared observatories, as well as ground-based telescopes like Caltech’s Hale Telescope at Palomar Observatory and the W.M. Keck Observatory in Hawaii to study aspects of the ring over the past 16 years. 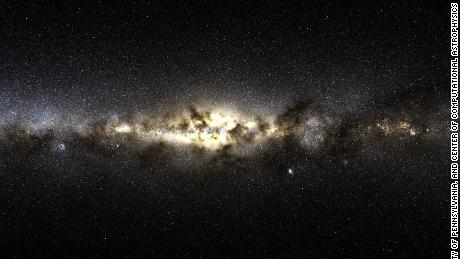 This also enabled the scientists to rule out the potential presence of a planet around the star and identify that the star was encircled by glowing dust — and ultimately, realizing they had witnessed something never seen before in stellar merger evolution.
“It’s like catching sight of a baby when it first walks,” said Don Neill, GALEX team member and research scientist at Caltech, in a statement. “If you blink, you might miss it.”

Harvey Weinstein has a fever, is being monitored by medical staff...