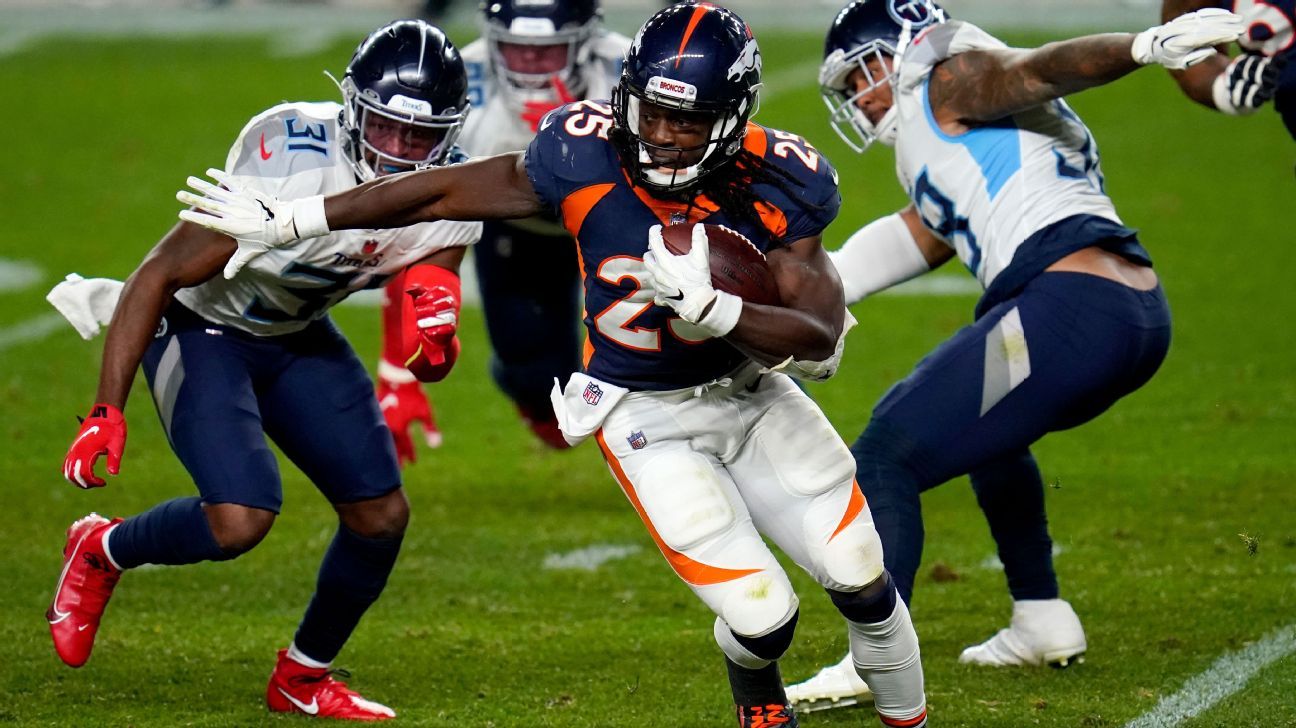 ENGLEWOOD, Colo. — Denver Broncos running back Melvin Gordon III will remain in Denver as the team is scheduled to travel for Sunday’s game against the New England Patriots in Foxborough, Massachusetts, sources told ESPN.

Gordon is being treated for strep throat by the team’s medical staff, sources confirmed to ESPN, and did not participate in the team’s Saturday morning walk-through. Gordon will not travel with the team later Saturday and will not play in Sunday’s scheduled game, per sources.

Gordon did not practice Friday due to the illness and was sent home from the team’s facility as the team’s doctors initially tried to determine if his symptoms were COVID-19 related.

After Friday’s practice, Broncos coach Vic Fangio was quick to say Gordon’s illness was “(an) illness totally unrelated with COVID.”

Gordon currently leads the team in carries (65), rushing yards (281) and rushing touchdowns (3). His illness comes in a week when he still could face team discipline in the weeks ahead, as well as up to a three-game suspension from the league, for his DUI arrest late Tuesday night.

Gordon was cited for both DUI and speeding — police documents show Gordon was clocked at 71 mph in a 35 mph zone — late Tuesday night in downtown Denver. Gordon then did not practice Wednesday following the arrest, practiced Thursday, but did not practice Friday when he became ill.

Gordon signed a two-year, $16 million deal with the Broncos this past offseason and had his first 100-yard rushing game with the team, including a 43-yard touchdown run in the closing minutes, in the Oct. 1 win over the New York Jets.

Phillip Lindsay, who has rushed for at least 1,000 yards in back-to-back seasons, is expected to start against the Patriots Sunday. It will be Lindsay’s first game since he left the season opener in the first half with a toe injury.

Lindsay and Royce Freeman are the only other running backs on the current 53-man roster, but Fangio said Friday the Broncos would move Jeremy Cox up to the active roster for the game if Gordon did not travel.

The Broncos have not played since the win over the Jets, and the game against the Patriots has already been moved twice on the schedule due to multiple positive COVID-19 tests among the Patriots players and coaches over the last two weeks.

Sunday’s game was originally scheduled for Oct. 11, was then moved to Oct. 12 before being moved again to Sunday.

9News first reported that Gordon would not play Sunday.

Dense Fog Advisory issued October 22 at 11:20AM EDT until October...

Wild's Guerin: 'I’ve got the greatest job in the world'

Sick NFL players must isolate even if negative

Emmanuel Acho breaks down why players should respect but not fear...