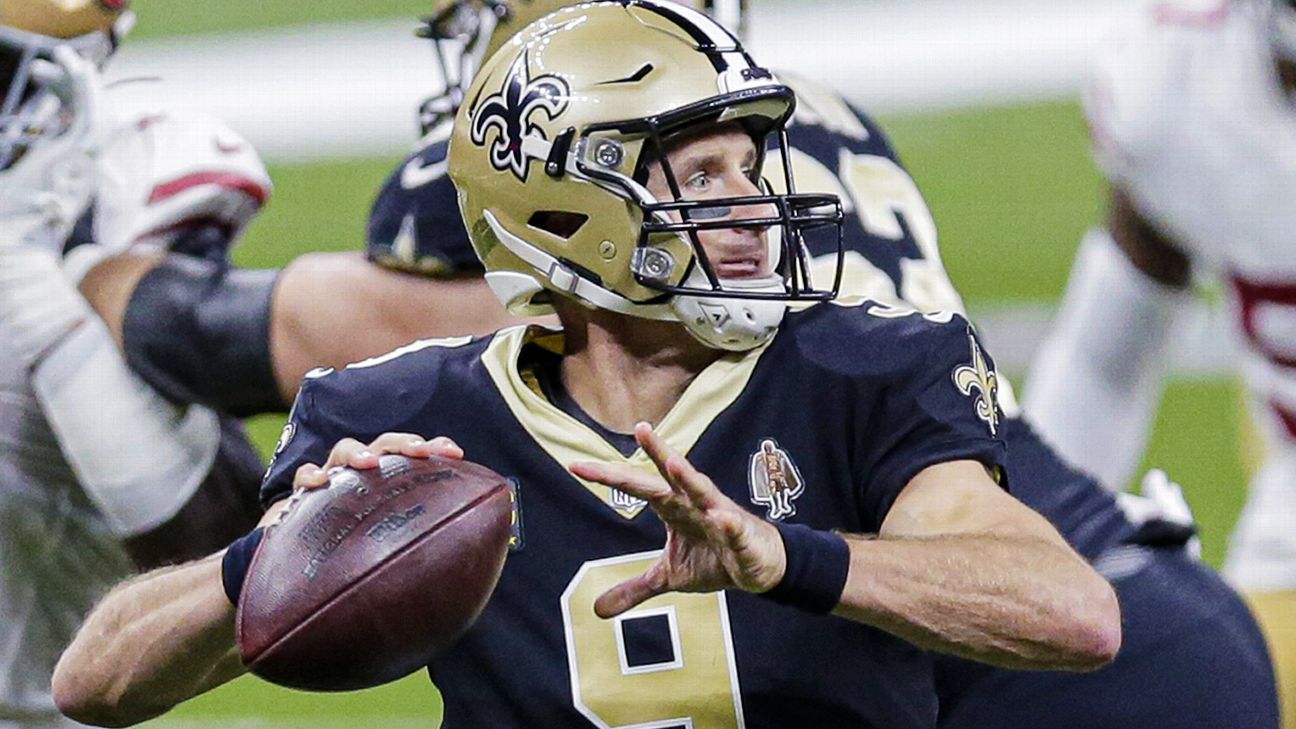 METAIRIE, La. — The second opinions that were solicited by New Orleans Saints quarterback Drew Brees confirmed the original diagnosis of a collapsed lung and a total of five fractured ribs on both sides of his body, a source told ESPN’s Ed Werder on Wednesday.

Doctors have not yet determined a timeframe for Brees’ return, according to the source, and Saints coach Sean Payton declined to offer any updates on the quarterback position on Wednesday morning.

“No update,” Payton said on his teleconference with the media before joking, “I’m eating a bagel. I was hoping to be chewing it when you asked.”

Payton told reporters on Monday that it wouldn’t benefit the Saints to announce their starting quarterback early in the week — though he did suggest on his weekly WWL Radio show on Monday night that both Jameis Winston and Taysom Hill would be part of the plan if Brees was unavailable.

Winston played most of the second half in New Orleans’ 27-13 win over the San Francisco 49ers after Brees was injured this past Sunday. But Hill, who is used in an occasional change-of-pace role for the Saints as a run-heavy quarterback even when Brees is healthy, played seven snaps at QB during the second half.

“Both of these young guys have progressed and have advanced, understanding what we’re doing, and there’s a confidence level we have in both players,” Payton said of Winston and Hill on Wednesday morning. “They’re different-type players. But I think it’s a strong room, and we’re gonna lean heavily on a few of these other guys right now.”

The Saints have not made any official declarations on Brees’ status for Sunday’s upcoming home date with the Atlanta Falcons. And they have not yet decided to place him on injured reserve — which would require him to miss at least three games.

Brees shared a picture Monday night of himself breathing into a spirometer, which is typically used to benefit the lungs. Brees was surrounded by his kids in the picture, with the caption reading, “I’ve got the best medical team in the world … will be back in no time!”

Remarkably, Brees actually stayed in the game for the final eight minutes of the first half Sunday after absorbing a big hit by 49ers defensive tackle Kentavius Street — finishing one touchdown drive, then completing five passes on another TD drive. He was unable to continue in the second half, though.

A source told Werder that Brees broke two ribs on his right side during the first half of the 49ers game — and that doctors believe those fractures may have punctured his lung, creating a pneumothorax. Doctors also discovered three fractured ribs on Brees’ left side, which are believed to have occurred a week earlier in a 38-3 victory over the Tampa Bay Buccaneers.

The fractures on the left side did not show up as such on the X-ray performed at the time, possibly because of inflammation, a source told Werder. Brees has also been dealing with an injury to his right throwing shoulder that limited him in practice for the past two weeks.

Brees sent his X-rays, CAT scan imaging and reports to other doctors to confirm the original diagnosis, a source told Werder.

Brees, 41, has missed only six games due to injury in his 20-year NFL career, with five coming last season because of a torn ligament in his thumb. The Saints went 5-0 during that stretch with Teddy Bridgewater replacing Brees as the starter.

Winter Weather Advisory issued November 24 at 9:17AM CST until November...

Lawrence virus-free, 'back to normal' for Clemson