Barr, The New York Times reported, asked prosecutors in the Justice Department’s civil rights division to investigate if they could charge Durkan as a result of protests this summer, when some protesters established a police-free zone in downtown Seattle.
“The Department of Justice cannot become a political weapon operated at the behest of the President to target those who have spoken out against this administration’s actions,” Durkan, a former US attorney, said in a statement. “That is an act of tyranny, not of democracy.”
“Ultimately, this is not a story about me. It is about the how this President and his Attorney General are willing to subvert the law and use the Department of Justice for political purposes,” she added. “It is particularly egregious to try to use the civil rights laws to investigate, intimidate, or deter those that are fighting for civil rights in our country.” 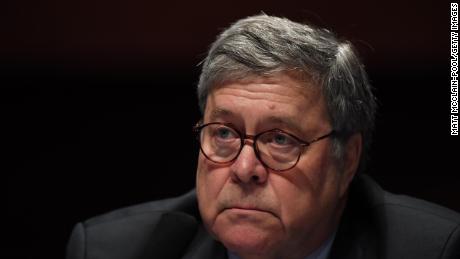 Durkan and the Trump administration had repeatedly clashed over how to handle the protesters who camped out and occupied the area outside Seattle police’s East Precinct building in the Capitol Hill neighborhood, which protesters dubbed the Capitol Hill Autonomous Zone.
Despite threats from Trump, Durkan said the city would not accept federal troops to move the protesters out. “The threat to invade Seattle — to divide and incite violence in our city — is not only unwelcome, it would be illegal,” she said at the time, declaring that the majority of the protests were peaceful.
Seattle police eventually dispersed protesters from the area in July after an emergency order from Durkan.
Barr’s suggestion that prosecutors should consider filing charges against the mayor fall in line with his public posture since George Floyd’s death in late May at the hands of Minneapolis police.
Casting himself as a law-and-order man, the attorney general has used speeches to show firm support for police and for quelling unrest rather than for the peaceful message advocating law enforcement reforms.
CNN reported earlier Wednesday that Barr had expressed frustration with some local and state prosecutors’ handling of riot-related crimes, telling top Justice Department prosecutors that he wants them to be aggressive in bringing charges related to protest violence, including exploring using a rarely used sedition law, according to a person familiar with the matter.
It’s a theme that has gained traction in conservative media, which Barr follows closely, and he is known to focus on the issue from time to time.
Still, some federal prosecutors were taken aback last week when the attorney general brought up the possibility of charging violent protesters with sedition, which is conspiring to overthrow the US government.
This story has been updated with additional background information and context.

Murkowski, prior to Ginsburg passing, said she 'would not vote' to confirm a nominee to Supreme Court before election

Graham praises Ruth Bader Ginsburg as a 'trailblazer' who 'served with...

5 scams spreading online that can cost you thousands