Russia’s parliament will begin reviewing President Vladimir Putin’s nomination of a little-known tax chief as the country’s new prime minister on Thursday after his announcement of a sweeping constitutional shake-up fuelled speculation he plans to extend his hold on power.

The lower house of parliament, or State Duma, which is overwhelmingly loyal to the Kremlin, is likely to approve Mikhail Mishustin for the role, after the shock resignation of the government in the wake of Putin’s call for reforms that would reshape Russia’s political system.

The announcements made during and after the president’s state of the nation speech triggered speculation about Putin’s role past 2024, when his current – fourth – presidential term expires.

The proposals would be the first significant change to the country’s constitution since it was adopted in 1993 and include a referendum on amending the constitution to increase the powers of parliament while maintaining a strong presidential system.

“I consider it necessary to conduct a vote by the country’s citizens on an entire package of proposed amendments to the country’s constitution,” Putin said, without specifying a date for a referendum.

Under the changes, legislators would name prime ministers and cabinet members, decisions currently made by the president.

“It will increase the role of parliament and parliamentary parties, powers and independence of the prime minister and all cabinet members,” Putin said. 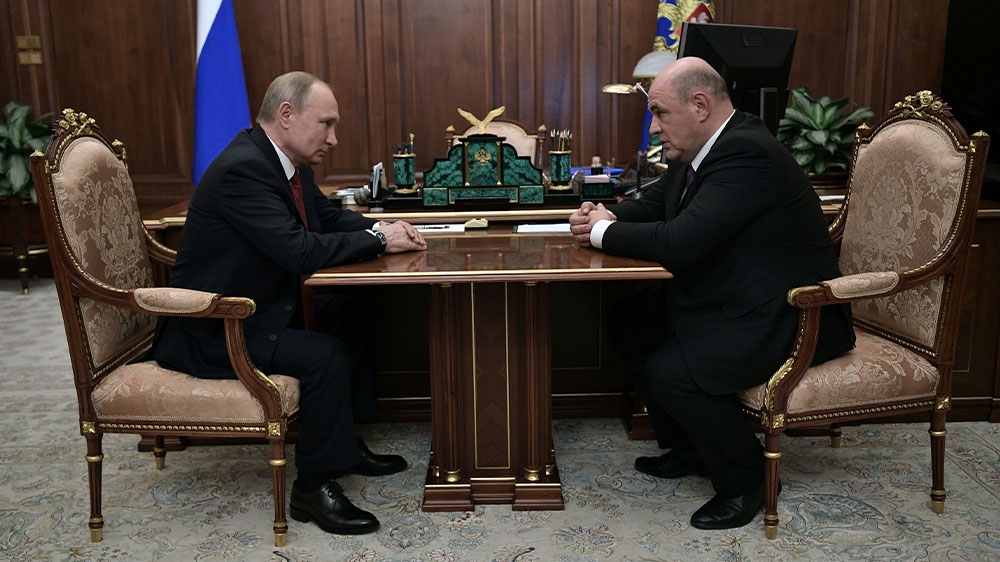 Putin has nominated the head of the Federal Taxation Service Mikhail Mishustin, right, as Russia’s next prime minister [Alexey Nikolskiy/Sputnik/Kremlin via Reuters]

Some suggested 67-year-old Putin, who has steered the country since 1999, could be laying the groundwork to assume a new post or remain in a powerful behind-the-scenes role.

It is also unclear whether Mishustin, a relatively obscure technocrat whose recent career revolved around Russia’s tax service, is a temporary figure or could be groomed as Putin’s successor.

The State Duma said on its website that Mishustin will hold “consultations” with the four parties represented in parliament prior to the plenary session starting at 10am (07:00 GMT), during which his candidacy will be formally reviewed.

Outlining his plans, Putin noted the “demand for change” among Russians who have seen their incomes stagnate or decrease for five years, while a key reform hiking the pension age has led to anger and a fall in Putin’s ratings.

Prime Minister Dmitry Medvedev announced the resignation of his government soon after Putin’s speech, saying the constitutional proposals would mean significant changes to the country’s balance of power.

He remains acting prime minister until a new head of government takes the reins.

Medvedev – who also served as Russia’s president for four years from 2008 – is expected to stay close to the Russian leader as deputy head of the country’s Security Council, which Putin chairs.

“He remains what he’s always been: (Putin’s) alter ego,” tweeted head of Carnegie Moscow Centre Dmitry Trenin, suggesting Medvedev could be being groomed as the next president.

He has been Russia’s prime minister for eight years.

“This is to show that Putin trusts Medvedev, who has been at his side for many years now,” said Aleksandra Godfroid, a journalist in Moscow. “These changes do indicate a change in power structures, but at the same time, they do keep the president very strong.”

“To remain the sole leader for life, who took over the whole country as his property… is the only goal for Putin,” tweeted opposition leader Alexei Navalny.

If 53-year-old Mishustin is appointed, he will have a week to propose a new government and ministers.

The former head of an investment group and trained as an engineer, he has a PhD in economics and has led the tax service since 2010.

He also shares Putin’s love for hockey and has been seen at matches with security services officials, according to reports.

Former opposition lawmaker Gennadiy Gudkov called Mishustin “a new faceless functionary without ambition” who embodies a system that is “detrimental for the economy”.

Putin is required under the constitution to step down when his current term ends; he will be 71.

“The proposed changes to the constitution imply the government will actually be appointed by the Russian parliament, which is not how it is now, but at the same time, the president will retain the power to fire the government if he is not satisfied with their performance,” said Godfroid.

“The president will also keep control of the army, police and security, and will be appointing the heads of those services,” Godfroid added.

Russia last conducted a referendum in 1993 when it adopted the current constitution under Putin’s predecessor, Boris Yeltsin.

Winter Weather Advisory issued October 25 at 8:30AM MDT until October...

Special Weather Statement issued October 25 at 9:21AM CDT by NWS