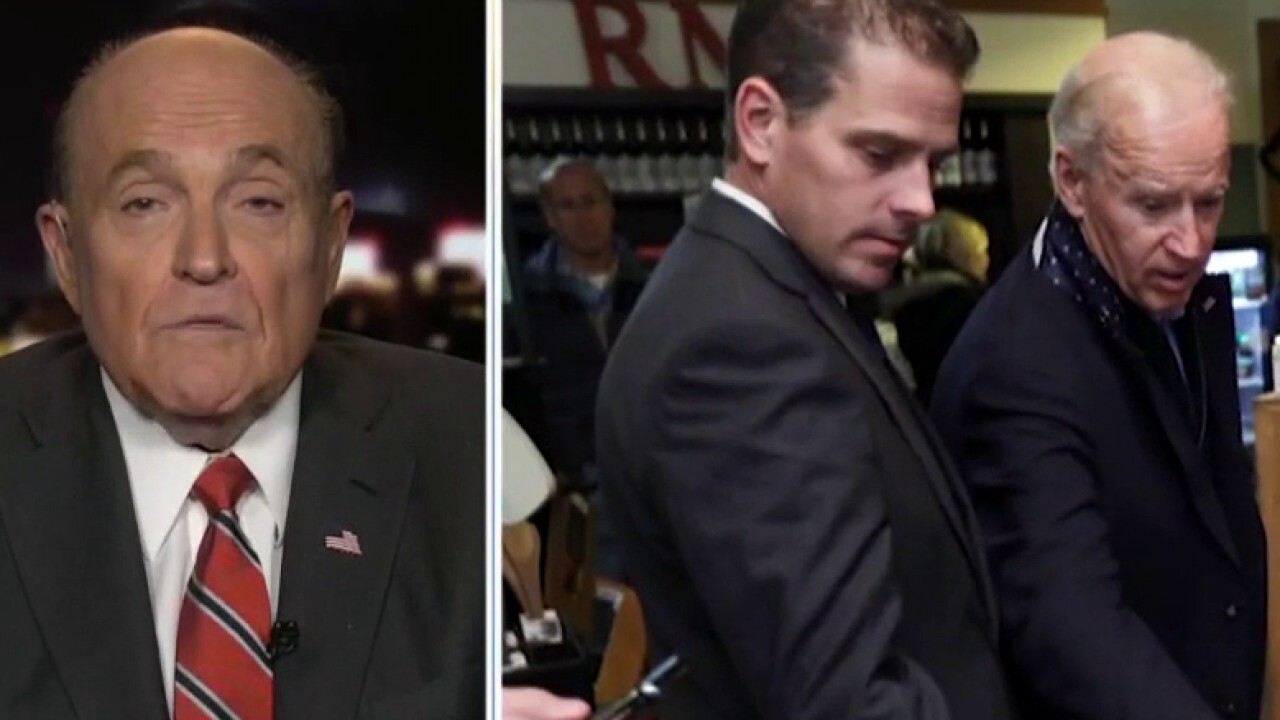 “This is Hunter Biden’s emails, texts, and really the photographs will shock the hell out of you,” Giuliani said, adding that Hunter Biden’s attorney was not disputing their legitimacy.

He claimed he had a memo tying Joe Biden to Hunter Biden’s international business, while the presidential nominee repeatedly has denied discussing Hunter’s overseas business interests with him.

Robert Costello, a lawyer for Giuliani, told Fox News on Wednesday he obtained a copy of a hard drive containing some 40,000 emails, thousands of text messages and photographs and videos of the younger Biden in “very compromising positions.” But he also emphasized that a Delaware computer repair shop owner handed over the documents and images to the FBI last December after he learned of the concerning contents on a damaged Apple MacBook Pro — and it remained unclear what further investigation the bureau performed, if any.

“Before this was even out, they were just called about it,” Giuliani said. “The first thing he does is call that merchant and he says can I have my client’s hard drive back? So, he is basically admitting for his client as his client’s agent, that’s Hunter Biden’s hard drive.”

“It’s authentic as hell,” he claimed. “Some of those pictures on it can only have come from him, and I’ll tell you why I know it for sure. I have about 10 pieces of confidential information nobody knows except me and Hunter Biden. Kept it that way. I investigated cases for 50 years. Every one of those hits the mark.”

Giuliani handed a handful over to the New York Post, which has released several reports, beginning Wednesday, purporting that Hunter Biden introduced his father, then-vice president Joe Biden, to an executive at Burisma Holdings — the Ukrainian energy firm where Hunter Biden sat on the board.

Fox News has not independently verified all of the info purported in the emails.

A spokesperson for Joe Biden’s presidential campaign, Andrew Bates, hit back at the allegations Wednesday afternoon, proclaiming that the Democrat “carried out official U.S. policy toward Ukraine and engaged in no wrongdoing.”

Moreover, the spokesperson highlighted that Giuliani has long perpetuated “discredited conspiracy theories” and that the Biden campaign has “reviewed Joe’s official schedules from the time and no meeting, as alleged by the New York Post, ever took place.”

Giuliani, who claimed there were thousands more emails to examine, said he had an anonymous source who told him about Hunter Biden’s meeting at the State Department, which would violate the Foreign Agents Registration Act, where he “was taken in the back door and kept off the books.” Giuliani’s source, he said, told him about the date, and he claimed the date shows up in Hunter Biden’s emails setting up the appointment, the date and the exact time.

Within the material, Giuliani said the photographs “make him a national security risk… because every photograph I have, China has plus a lot more. They reveal federal crimes… they reveal numerous times where he was totally gone on crack.”

When asked about the Washington Post story alleging Giuliani traveled to Ukraine and Russia in 2019 to dig up dirt on the Bidens, Giuliani denied any knowledge of it.

“I have no other knowledge of it other than what you just told me,” he told co-host Ainsley Earhardt. “No one in the Trump administration around with me. No one in the intelligence community warned me, president didn’t say that to me. This is the first time I’m hearing that.”

He added: “I have a pretty good idea where it’s coming from. These are people who are trying to tear down Donald Trump and destroy his presidency and the intelligence community of which there are many.”

Dense Fog Advisory issued October 22 at 1:22AM CDT until October...

Dense Fog Advisory issued October 22 at 2:19AM EDT until October...

Dense Fog Advisory issued October 22 at 12:58AM CDT until October...