Rep. Jim Jordan, R-Ohio, urged states implementing new coronavirus restrictions to consider the constitutionality of their actions, he said in an interview with “Watters’ World” on Saturday.

Some of the new and tightened guidelines surrounding Thanksgiving gatherings include wearing a mask inside your home in Pennsylvania, limiting the number of people to no more than six in Oregon, with the threat of jail time if violated, no singing allowed in New Jersey and no dancing at weddings in Ohio.

“This has gotten so ridiculous and we forget this is America,” he said. “When the first lockdown happened, the attorney general of the United States sent out a memo to all U.S. attorneys… near the end of the memo he had a great line. He said, ‘The Constitution is not suspended during a crisis.’ And amen to that.”

Jordan said not only do the American people need to remember this mantra but he stressed that the Constitution might be “most important” during a time of crisis, especially at this scale. 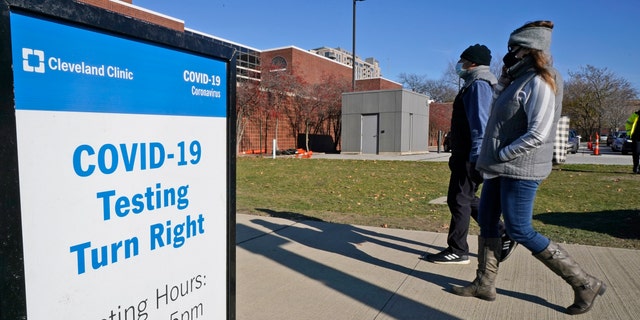 Two people walk past a sign for COVID-19 testing at the Cleveland Clinic, Wednesday, Nov. 18, 2020, in Cleveland. (AP Photo/Tony Dejak)

Meanwhile, Democratic officials like California Gov. Gavin Newsom have been caught breaking their own rules by dining and gathering in large groups, ignoring proper COVID etiquette.

Jordan said these incessant double standards are driving Americans “crazy,” and he’s personally most bothered by governors continuing to act as if they know what’s best for business owners and their customers.

“I think the small business owner who’s running their business cares deeply about the wellbeing of their employees, deeply about the wellbeing of their customers, exercises common sense and good judgment,” he said. “Let them operate their business, for goodness sake. Don’t put all these restrictions on them and don’t shut them down, which now it seems far too many governors and mayors are attempting to do.”

Trump plans trip to Georgia amid his election battle

Trump plans trip to Georgia amid his election battle