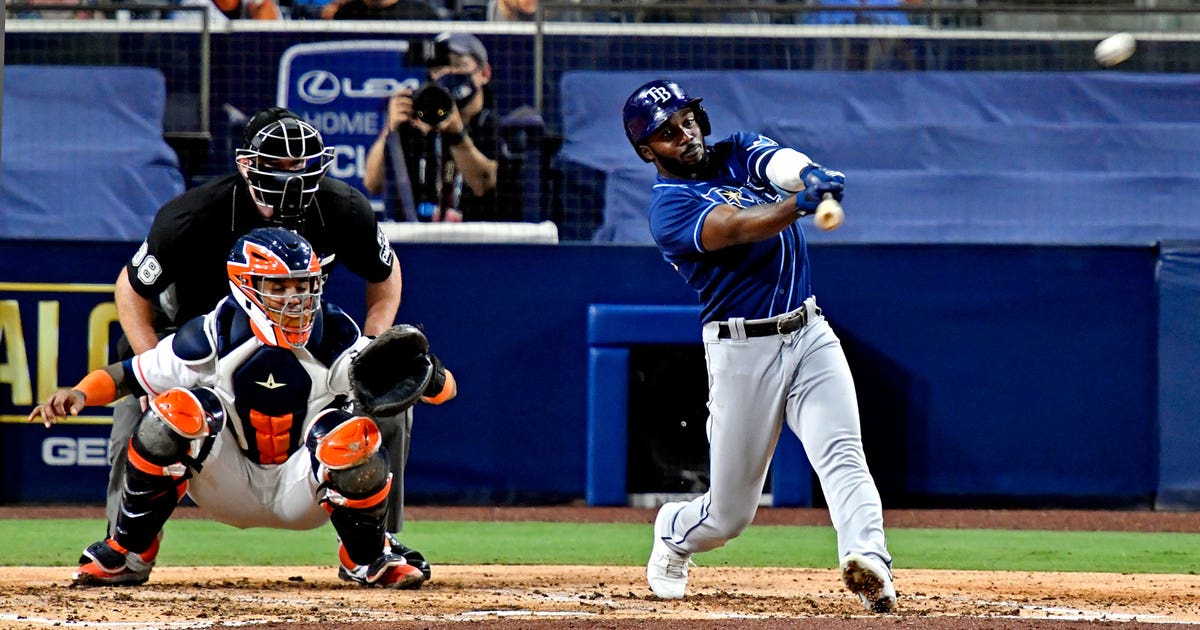 SAN DIEGO (AP) — Although Randy Arozarena is having an undeniably incredible postseason, he can’t always carry the Tampa Bay Rays’ offense all by himself.

In fact, it’s a bit wild that the Rays have reached the brink of the World Series with an unheralded rookie doing so much of their offensive work.

When nobody stepped up to help Tampa Bay’s surprising slugger until the ninth inning of Game 4 of the AL Championship Series on Wednesday night, the Rays were forced to extend their stay in San Diego by at least a day.

Arozarena hit a two-run shot in the fourth inning for his fifth homer of the postseason, but the Rays didn’t score again until Willy Adames‘ two-out double in the ninth. Adames was stranded on third when Yoshi Tsutsugo‘s liner was caught in right field to end Tampa Bay’s 4-3 loss.

The foundation of Tampa Bay’s success this fall is not offense: After batting .238 in the regular season to rank 21st in the majors, the Rays entered Game 4 of the ALCS hitting a meager .209 in the postseason with a .680 OPS — both the worst among the four remaining teams — despite its 8-2 record in that stretch.

The Rays got to the brink of their franchise’s second World Series appearance relying on a stellar pitching staff, superb team defense and the hot bat of Arozarena, who’s batting .438 in the playoffs with a jaw-dropping 19 hits — one more than he managed in the entire regular season.

While nobody has matched Arozarena’s production for Tampa Bay in October, several teammates have stepped up in different games to provide key hits and runs. It never happened in Game 4, and the Rays’ four-game playoff winning streak ended with seven hits — just two for extra bases — in their first potential closeout game of the ALCS.

“We’ve got to get the bats going, no doubt about it,” Tampa Bay manager Kevin Cash said. “We’ve been carried here by our pitching and defense, which is how we’re built, but we sure would like to get some (hits). It’s not coming easy for anybody now. We’ve got guys in our lineup that are scuffling a little bit.”

Arozarena’s fifth homer of the postseason put him in elite company: He has hit more homers in a single postseason than any rookie in major league history except Evan Longoria, who hit six for these same Rays in 2008. Kyle Schwarber also hit five for the Cubs as a rookie in 2015.

But Arozarena struck out in his other three at-bats in Game 4, including a whiff with two runners on in the sixth. Tampa Bay put together its best rally in the sixth with three singles, but Greinke escaped the jam with a bases-loaded strikeout of Mike Brosseau.

Although the final destination hasn’t been determined, Arozarena’s postseason is already a remarkable journey. His 19 hits are the fourth-most by a rookie in a single postseason, and his nine extra-base hits are the most in Rays postseason history.

Nicknamed “The Cuban Rocket,” Arozarena defected from Havana to Mexico in 2015 and signed as a free agent with the St. Louis Cardinals for $1.25 million in 2016. He made his big league debut last year for St. Louis, but was traded to the Rays in the offseason.

Arozarena then missed the first 34 games of the regular season after catching COVID-19 and then taking time to build up to full strength — he got a head start by doing hundreds of pushups per day while in quarantine. He had 18 hits in 64 at-bats during the regular season, but he already has 19 hits in 43 at-bats in the playoffs.

Tampa Bay got a decent outing from No. 2 starter Tyler Glasnow, but the towering 6-foot-8 right-hander from the outer Los Angeles suburbs was not dominant.

Glasnow yielded eight hits and four runs over his six innings, striking out five. He walked two but was hurt mostly by the Astros’ big hits, giving up homers to José Altuve and to George Springer.

Tampa Bay hadn’t allowed an RBI with a Houston runner in scoring position in the entire ALCS until Altuve’s double in the third brought home Martín Maldonado.

When Tsutsugo lined out against Ryan Pressly, Tampa Bay missed out on the second playoff series sweep in franchise history, following its two-game sweep of Toronto in this season’s wild card round.