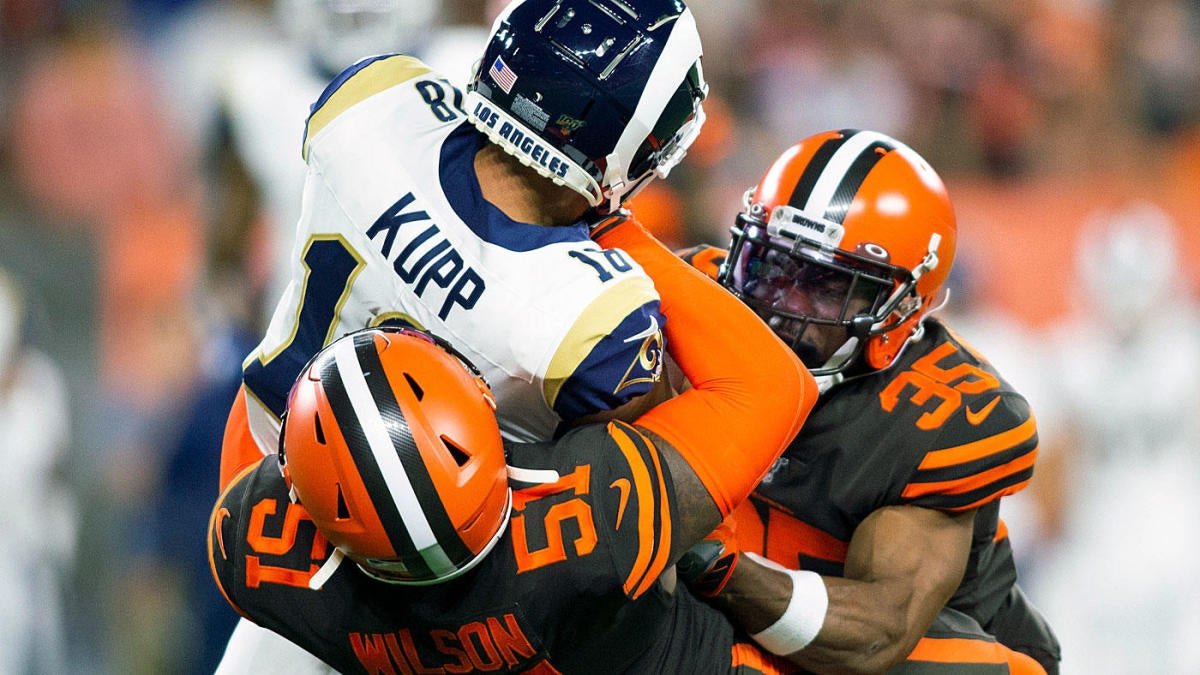 Baker Mayfield and Freddie Kitchens had a chance to prove to Cleveland Browns fans on Sunday night, under the lights of prime time, that they are finally ready to live up to their potential. Instead, the Los Angeles Rams had their way in the trenches, and the reigning NFC champions marched to 3-0 with a 20-13 victory to close out the Sunday slate of Week 3 action.

Neither Mayfield nor Kitchens looked particularly comfortable against L.A.’s defense, even though the Browns’ own “D,” depleted by injuries in the secondary, fought hard to take the game to the wire.

Let’s dive a little deeper into the Rams’ close win on Sunday night:

Why the Rams won

When you have Aaron Donald and a rejuvenated Clay Matthews, you stand a chance of disrupting an opponent’s line. When you have those guys and you’re playing the Browns, well, even better. L.A. got into Baker Mayfield’s head by putting plenty of pressure on the pocket, mostly with just the front four. Marcus Peters and Aqib Talib also held their own throughout the contest, preventing either of the Browns’ big-name wideouts from going off. On the other side of the ball, the reasoning for victory is simple: Cooper Kupp. Brandin Cooks also had a busy night, but no one makes Goff comfortable like Kupp, whose 11 catches absolutely gassed the Browns’ depleted secondary.

Why the Browns lost

Have you seen their offensive line? Whatever is happening there is not good, and on Sunday night, it contributed to Mayfield getting happy feet and rolling out of pockets that had yet to be disturbed. Cleveland’s offense as a whole has yet to find a consistent rhythm through three games, and a good chunk of the blame should be assigned to coach Freddie Kitchens, who also fumbled a crucial late-game fourth-down call by running a draw with nine yards to go. The Browns definitely didn’t lose because of their defense, which gave Mayfield and Co. more than enough opportunities to steal one. The offense, which drew all the hype this offseason, remains issue No. 1.

It had to be Kitchens’ fourth-and-9 dial-up of a draw. No one can argue that Nick Chubb looked good toting the rock vs. Los Angeles — the second-year back finished with 96 yards on 24 carries to go along with 35 receiving yards. But that one was inexcusable. Of course, we can’t say if the Browns would’ve converted by throwing, but by essentially surrendering the down to the Rams, Kitchens backed his club into too dark a corner. Even if it was a misunderstanding, it killed.

Play of the game

In a relatively mild game in terms of big plays, Browns corner T.J. Carrie actually had the most impressive snap of the night. With Cleveland ahead by three late in the third quarter, he dove in front of Cooks on a dangerous sideline pass from Goff to intercept the Rams, fully extending to force the turnover and keep the Browns’ hopes alive.

“I didn’t do a good job at the end of the game … I don’t think I did very good. I didn’t, as a coach, do a good enough job putting these guys into position … Just blame me. Go write your article and say it’s my fault … Because it is.” — Kitchens

Kitchens did not mince his words when describing where blame should be placed for the Browns’ loss at home. Curiously enough, however, he also told reporters after the game that he thinks the Browns’ offense is looking up.

“I think it’s starting to come together,” Kitchens said. “It felt like it was starting to flow better during the game.”

The Rams (3-0) return home on Sunday, Sept. 29, for an afternoon showdown with the Buccaneers (1-2), who are fresh off a last-second loss to the New York Giants. The Browns (1-2), meanwhile, won’t necessarily get it any easier on the same day, when they travel to take on the Baltimore Ravens (2-1) in an AFC North battle.