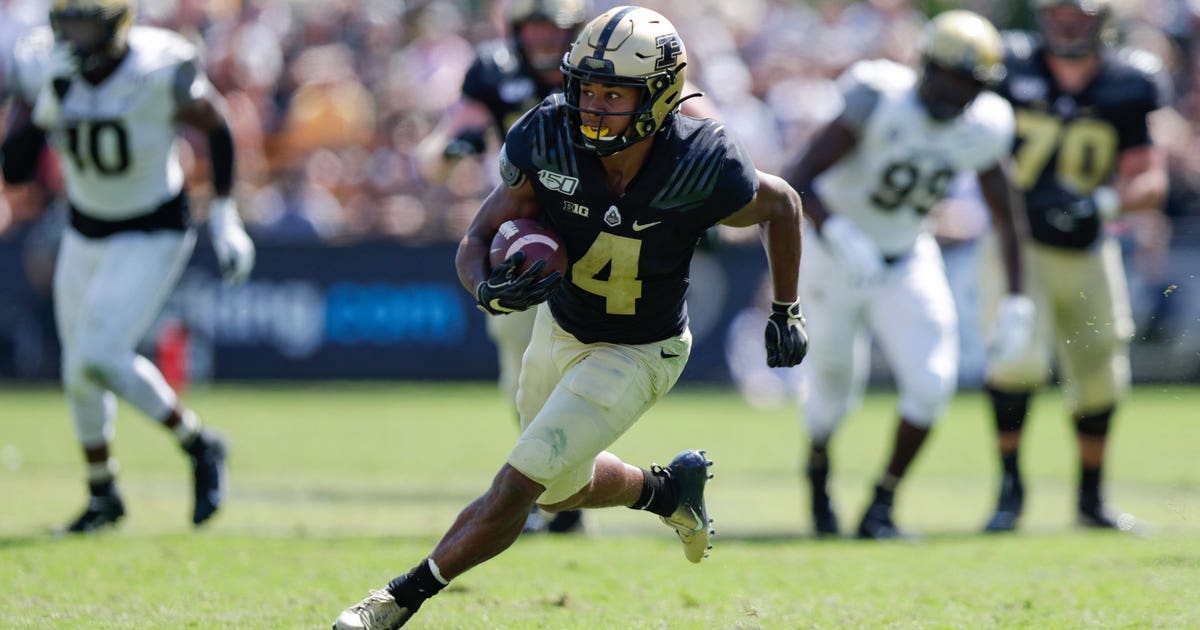 Now, the receiver who electrified college football two years ago has changed his mind and returned to the college gridiron.

“He gives us an explosive element we have to make sure we utilize,” coach Jeff Brohm said. “He understands last year didn’t go the way we wanted because of the injury and he wanted to go out and prove he’s durable and can continue to make plays. We’re excited to have him back.”

In 2018, Moore became the first true freshman in Big Ten history to earn consensus All-America status after catching 114 passes for 1,258 yards and 12 touchdowns, rushing 21 times for 213 yards and two more TDs, and returning 33 kickoffs for 662 yards.

So when he returned for his sophomore season, some thought Moore would be in the Heisman Trophy mix. Instead, he injured his hamstring in the fourth game and missed the final eight.

Moore proclaimed himself fully healthy in March, but when Big Ten leaders postponed the season in August because of the pandemic, Moore announced he wouldn’t play in the spring and would instead focus on the NFL draft.

His stance changed only after the conference reversed course, giving Purdue one of the league’s top playmakers.

“I have the ability to line up outside, inside, I can run past you, make you miss,” Moore told ESPN while announcing his return. “I’m dynamic in the return game, so with that being said, I think I’m the best receiver in America.”

Sophomore receiver David Bell, last year’s Big Ten freshman of the year, hopes to prove his teammate isn’t even the best receiver in West Lafayette, Indiana. At 6-foot-2, 205 pounds, Bell is bigger than Moore and equally productive after a season with 86 catches, 1,035 yards and seven touchdowns.

Individually, they can both be stars. But together, they could be the Big Ten’s best one-two punch this season.

“I believe the sky is the limit for us and this offense,” Bell said.

The two receivers should help Purdue improve on last year’s 4-8 mark, and Brohm’s creative play-calling could make the Boilermakers one of the nation’s highest-scoring teams. But they must find the right quarterback.

Elijah Sindelar opted not to return for a sixth season after suffering a season-ending injury on the same play as Moore. Jack Plummer started the next five games before a broken ankle ended his season, and former walk-on Aidan O’Connell close out the final three.

Plummer and O’Connell both return this season and will compete against Austin Burton, a graduate transfer from UCLA, for the starting job.

Defensive tackle Lorenzo Neal also returns to the field after missing last season while rehabbing from a torn anterior cruciate ligament, suffered during the 2018 season finale.

With the 6-3, 325-pound Neal manning the middle and standout George Karlaftis back at defensive end, the defense should be stingier than the last year’s unit, which yielded 30.6 points and 192.5 yards rushing per game.

“Right now, he (Neal) is not 100%,” Brohm said. “But I think he’s very close and he’s out there and he’s working hard. It’s important we get him into games because he’s a very, very good player.”

Brohm said he gave players a short break from August workouts when it appeared the Big Ten wouldn’t resume play until January. He also has said some players may get more practice time to create depth in case positive tests force quick lineup changes. Brohm also credited the league’s daily testing protocols with being a prime factor in Moore’s decision to play.

Indiana and Purdue will meet this season, though the Dec. 12 game in Bloomington will not be played on the traditional Thanksgiving weekend. One big advantage for the Boilermakers: Ohio State, Michigan and Penn State don’t appear on the schedule. They open the season hosting Iowa on Oct. 24.

Radioactive: Kansas Speedway – “I’ll hook the damn No. 11 next time. Tell him that.”

One game away from ALCS elimination, Astros throwing away their opportunities

Passan: Braves are making the improbable real against the Dodgers in...