House Speaker Nancy Pelosi hasn’t indicated when she will send the latest article of impeachment against President Trump to the Senate even as House Majority Leader Steny Hoyer, her chief deputy, publicly advocates that the article be sent “as soon as possible.”

Pelosi, when asked Wednesday whether she would send the impeachment article to the Senate on that same day, responded that “I will not be making that announcement right now.”

That was a break from Hoyer, D-Md., who asked if he knew when Pelosi would send the article said: “The speaker’s talking to Mr. Schumer and will determine that, but I’m personally urging them to send it over as soon as possible.”

THESE ARE THE 10 REPUBLICANS WHO VOTED TO IMPEACH TRUMP

Pelosi, in a ceremony with impeachment managers where she signed the article of impeachment that accuses the president of inciting an insurrection, did not say anything about the timing of when she would send the article to the Senate.

Meanwhile, Senate Majority Leader Mitch McConnell, R-Ky., and Senate Minority Leader Chuck Schumer, D-N.Y., are publicly quibbling about whether or not the Senate should be immediately brought back to start an impeachment trial before President-elect Biden takes office on Jan. 20.

McConnell’s office said Wednesday that he would not invoke a 2004 resolution that had been pushed by Democrats as giving him and Schumer joint power to reconvene the Senate, without unanimous consent, for what would essentially be an emergency session. Schumer was exploring the possibility that he could get McConnell to invoke the resolution with him earlier this week.

Instead, McConnell said in a statement: “I believe it will best serve our nation if Congress and the executive branch spend the next seven days completely focused on facilitating a safe inauguration and an orderly transfer of power to the incoming Biden administration.”

The result of the indecision among some of the most powerful leaders in Congress is an unclear path forward after the House of Representatives on Wednesday made Trump the only president ever to be impeached twice.

This is a familiar course of action for Pelosi, who held on to the two articles of impeachment passed against Trump in late 2019 for weeks before eventually transmitting them to the Senate. She did this, she explained, because she wanted the Senate to hold a “fair trial” for the president, with witnesses. This angered some Democrats who saw Pelosi as undermining the urgency of the impeachment. The Senate did not end up calling witnesses.

Pelosi’s office did not immediately respond to a request for comment on this story, including questions about when she would transmit the impeachment article to the Senate.

Whenever it is that Pelosi decides to send the articles, the Senate, according to its rules, will be essentially forced to drop everything it is doing and hold an impeachment trial for Trump.

The exact timing of the trial depends on when the Senate is in session, however. Currently, the Senate is scheduled to only hold one pro forma session on Friday before it reconvenes on Jan. 19. But the Senate cannot do any business during the Friday pro forma session without unanimous consent — something that it is almost certain not to get given the number of Trump loyalists in the upper chamber.

So, unless McConnell has a change of heart on reconvening the upper chamber, the Senate will almost certainly only officially receive the message from the House that it has impeached the president on Jan. 19, the day before Biden takes office. If Pelosi has transmitted the article by that time, the Senate would be forced to begin its trial of the president at 1 p.m. on either Jan. 20 or 21. This would be either the day Biden is sworn in or his first full day in office. If Pelosi holds on to the articles even longer, then the Senate trial would be delayed longer. 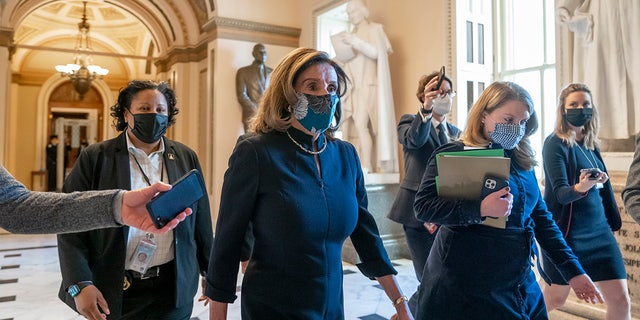 Speaker of the House Nancy Pelosi, D-Calif., returns to her leadership office after opening debate on the impeachment of President Donald Trump, at the Capitol in Washington, Wednesday, Jan. 13, 2021.  (AP Photo/J. Scott Applewhite)

Then, the Senate would essentially be locked into the impeachment trial until it is finished and there is a vote on whether to convict Trump, who will then be the ex-president, for inciting an insurrection. This could delay the body’s ability to consider other priorities, like Biden’s national security-related nominees.

At the moment there is no clear number on how many Republicans would vote to convict Trump. It would require about a third of the Senate GOP caucus to vote against Trump to secure his conviction at the two-thirds threshold in the Constitution.

McConnell himself in a statement to fellow Republicans confirmed that he is at least considering voting to convict Trump.

“While the press has been full of speculation, I have not made a final decision on how I will vote and I intend to listen to the legal arguments when they are presented to the Senate,” he said.

What is clear, however, is that despite some who argue that a Senate impeachment trial for a former president is not constitutional, a trial will happen. McConnell has not disputed that a trial will happen. And Schumer, who later this month will become the effective majority leader after the swearing-in of Sens.-elect Raphael Warnock, D-Ga., and Jon Ossoff, D-Ga., as well as Vice President-elect Kamala Harris, committed to holding a trial in a statement Wednesday.

“A Senate trial can begin immediately, with agreement from the current Senate Majority Leader to reconvene the Senate for an emergency session, or it will begin after January 19th. But make no mistake, there will be an impeachment trial in the United States Senate,” Schumer said.

He added: “The president incited a violent mob against the duly elected government of the united states in a vicious, depraved and desperate attempt to remain in power. For the sake of our democracy, it cannot and must not be tolerated, excused, or go unpunished.”

A conviction in the Senate could result in Trump being barred from holding any U.S. government office again based on a separate, subsequent vote.

The impeachment of the president followed weeks of false claims that he won the presidential election, despite losing to Biden. Trump doubled down on those baseless claims in a raucous rally with thousands of supporters in Washington, D.C., on Jan. 6, the same day members of Congress and Vice President Mike Pence were meeting to certify Biden’s Electoral College win.

Trump did say his supporters should “peacefully and patriotically make your voices heard,” but that small line among other lies and incitement led lawmakers to believe the president bore the responsibility for what his supporters did next.

“The president of the United States summoned this mob, assembled the mob, and lit the flame of this attack. Everything that followed was his doing,” Rep. Liz Cheney, R-Wyo., who voted to impeach Trump, said.

Those supporters then marched through the city and attacked the U.S. Capitol, resulting in multiple deaths and forcing lawmakers and Pence to go into hiding for hours. The attack was the worst assault on the seat of the American government since the Capitol was burned by the British in 1814.

Flood Warning issued January 16 at 9:29AM CST until further notice...

Article of impeachment against Trump to be introduced Monday in House

Tom Brady expected to play with Buccaneers in 2021: report