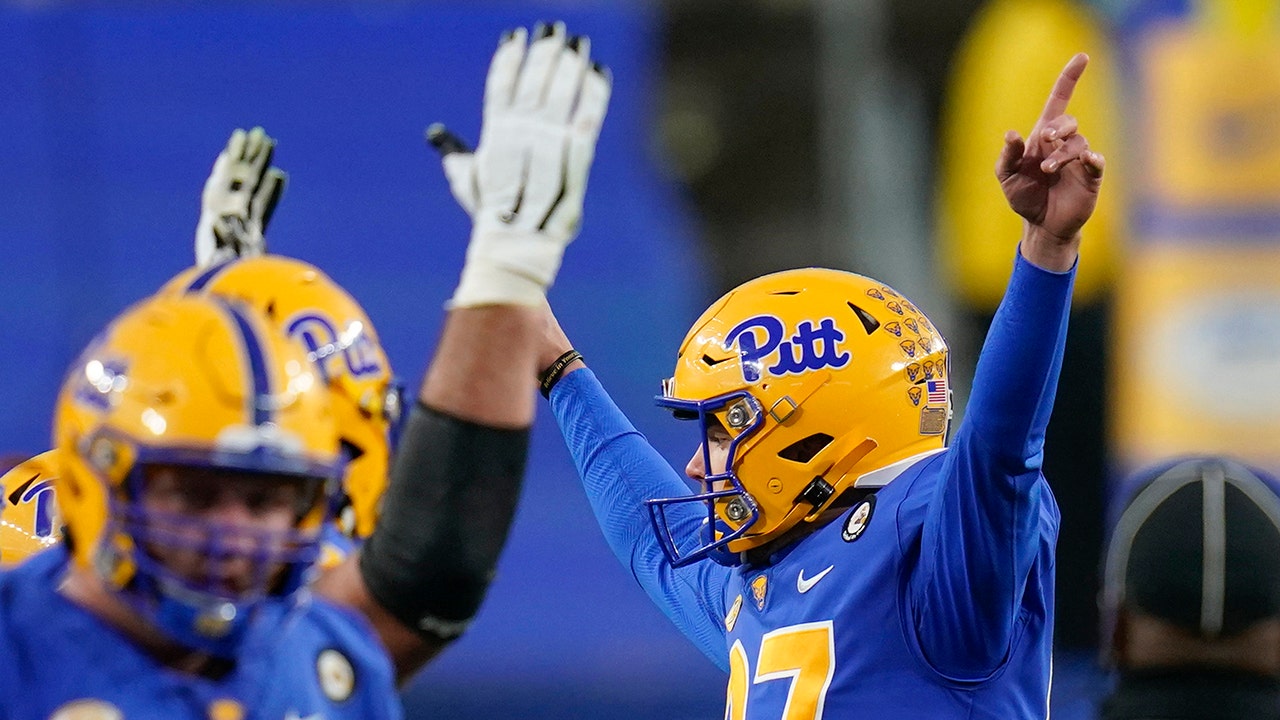 His team reeling from a bout with COVID-19 that threatened to derail the rest of the season, Pittsburgh senior quarterback Kenny Pickett stood up in front of his teammates as the Panthers prepared to face Virginia Tech and provided a very blunt reminder about the bond they shared.

“He said ‘I don’t care who is on the field, I will play with any of my brothers here,’” Pitt head coach Pat Narduzzi said.

It wasn’t just empty rhetoric. Pickett threw for 404 yards and two touchdowns and ran for another in his final start at Heinz Field as the Panthers blew out the Hokies 47-14 on Saturday despite missing 16 players due to COVID-19 protocols, including three starters on the offensive line and leading receiver Jordan Addison.

No matter. Pickett completed 35 of 52 passes, 15 of them to graduate transfer DJ Turner, including a 64-yard catch-and-run for a score in third quarter that gave the Panthers (5-4, 4-4 Atlantic Coast Conference) a 19-point lead they didn’t come close to squandering.

Wearing the same all-blue uniform he donned while leading Pitt to an upset over then second-ranked Miami in his first-ever start as a true freshman in 2017, Pickett’s final performance at Heinz Field was perhaps his best. He spent Friday night reminiscing how quickly time flies. On Saturday stayed firmly rooted in the present, displaying the resilience and the leadership that has become his trademark.

“I had faith in every single guy that was out there,” Pickett said. “The biggest thing in football is trust, you’ve got to trust the 10 guys out there and I think we did that tonight.”

A week after having their game against Georgia Tech rescheduled due to COVID-19 protocols, the Panthers had little trouble doing whatever they wanted against the Hokies. Virginia Tech, missing 12 players because of the same COVID-19 protocols, simply could not keep pace.

Herdon Hooker threw for 260 yards and two scores but the Hokies turned it over twice and were stopped on fourth down twice, including a quarterback draw by Hooker on fourth-and-goal at the Pitt 1 in the third quarter with the Hokies trailing by 12. Hooker was stuffed for no gain and four plays later Turner was dashing to the end zone.

“I know we’re down a lot of guys and all that kind of stuff, but that don’t mean we can’t get first downs on fourth-and-1 or score on fourth-and-goal from the 1 or play better,” Virginia Tech head coach Justin Fuente said.

The defense couldn’t pick up the slack, allowing Pitt to roll up 556 yards of total offense. The Panthers led just 16-14 late in the first half but scored the game’s final 27 points to win going away. Virginia Tech has dropped three of four following a promising 3-1 start.

Pitt itself was reeling after a 3-0 September was followed by an 0-4 October. Two of the losses were by one point, the other two came while Pickett was sidelined by an ankle injury. The Panthers are 2-0 since his return and scoring at a rate they haven’t done during Pickett’s tenure.

“It was an emotional week,” Pickett said. “I got choked up last night talking to the team. … Last time playing your home stadium, it means a lot.”

CAN I KICK IT?

Pitt senior kicker Alex Kessman drilled four field goals, including two from over 50 yards. Kessman is 12 of 18 on attempts of 50 yards or more during his career, the best conversion rate (67%) by any player in FBS history among kickers who have taken at least 15 attempts from that range.

Turner, finishing up his college career with the Panthers after coming over from Maryland, had never caught more than eight passes in any game in his life. With Addison out, that changed against the Hokies. Turner’s 15 grabs were one short of Pitt’s single-game record and created quite the memory for Turner to share down the road with his one-month-old son Darryl Turner III, who was one of the 4,612 in attendance.

“I mean, guys, we’re playing in the middle of a pandemic, and like the most extreme circumstances we’ve ever seen,” Fuente said. “I couldn’t be more proud of our guys and how they’ve hung in there through the entire thing. Do we expect to play and win? Yes, absolutely. But the notion that it’s something terrible, wrong or whatever is just ridiculous.”

Pitt: The chance to reach the ACC Championship game — a vision that seemed a possibility after that hot start — has vanished. Yet the Panthers have bounced back impressively.

Virginia Tech: Have a week off before welcoming Clemson on Dec. 5. The Hokies have lost five straight to the Tigers.

Pitt: Won’t have to wait until December to face Clemson. The Panthers travel to Death Valley to take on ACC-power Clemson next Saturday. The last time Pitt visited Clemson, it pulled off a 43-42 upset against the eventual national champions.