Philadelphia officials have released the body camera footage and a 911 call in connection with the fatal police-involved shooting of 27-year-old Walter Wallace Jr.

“We truly believe that this is an important step in our commitment to transparency,” Police Commissioner Danielle Outlaw said during a Wednesday news conference before the release of the video.

It’s the first time in the department’s history that bodycam video has been released to the public, she said.

Wallace, a Black man armed with a knife, was shot and killed shortly before 4 p.m. on Oct. 26 in Philadelphia’s Cobbs Creek neighborhood. He was struck in the shoulder and chest, and taken to the hospital in a police car, but could not be saved, officials previously said.

Officials have said Wallace ignored orders to drop a knife and charged at police.

The police officers involved were identified Wednesday by Outlaw as Thomas Munz, 25, and 26-year-old Sean Matarazzo. Munz has been with the Philadelphia Police Department since 2017 and Matarazzo joined the force in 2018.

Outlaw previously said the pair collectively fired 14 rounds, though it was not immediately clear how many stuck Wallace.

Neither officer was equipped with a Taser at the time.

Johnson and the Wallace family viewed the body cam footage last week, after which he told reporters the video shows Wallace emerging from a house with the weapon as relatives shout at officers about his mental health condition.

On the 911 calls, a neighbor told police at 3:42 p.m. about a dispute in a neighboring apartment unit. Seconds later, a woman calls from another location to report that her brother is abusing his parents in the same unit.

“He got a taste for being violent and everything,” the caller says. “He got a whole record.”

Another call was placed at 3:43 p.m. from a man saying “my mom needs help” at the same location.

The city also released police radio transmissions just before officers arrived to the scene; they receive directions for an “ongoing domestic issue.”

The body camera footage from both officers shows Wallace leaving the apartment as the two officers approach the property. A woman inside the unit is heard telling him to put his knife down. The officers yell for Wallace to put down the weapon, then they point their guns at him as he calmly walks toward one officer, who is seen backing up.

Wallace disregards multiple commands to drop the weapon and eventually walks across the street where he takes a few steps before appearing to walk toward the other officer. As he follows him, Wallace appears to briefly lunge while the officer is standing several feet away.

Shot rings out shortly after and Wallace falls to the ground. A woman screams, “You killed my son!” and tries to hit one officer several times. Onlookers then swarm the scene.

One officer tells another, “He was (expletive) chasing us.”

The incident lasted just over 40 seconds. Wallace was taken to a hospital where he later died.

Johnson said the video shows “instant panic” from officers whose training taught them only how to open fire, he said, noting he saw no viable attempt from officers to de-escalate the situation. He denied that the video showed a man with a knife lunging in a way that would be a reason to shoot him, Johnson said. 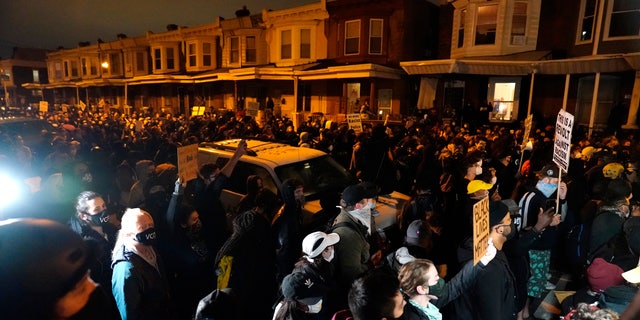 “I understand he had a knife, but that does not give you carte blanche to execute a man, quite frankly,” Johnson told reporters at a news conference outside Philadelphia City Hall last month. “What other than death did you intend when you shoot a man — each officer — seven times apiece?”

“None of the 14 shots were necessary, but if you were going to shoot, the first shot incapacitated the man,” Johnson said. “There were 13 shots to follow, which is why he is no longer with us.”

An investigation into the shooting is ongoing, officials said.

“We are going to protect this family and the integrity of the investigation that the district attorney’s office is going to do and try to get justice, whatever that may look like,” Philadelphia District Attorney Larry Krasner said.

Police union officials criticized city leaders for “casting blame” on the officers who were forced to make a “split-second decision.”

“These officers followed their training and police department policy, ” said John McNesby, president of the Philadelphia Lodge of the Fraternal Order of Police. “Mayor Kenney has called this ‘police violence,’ however the real violence was perpetrated by the knife-wielding man, who confronted out police officers.”

During the news briefing, Kenney acknowledged the possible racial factors stemming from Wallace’s death and others like it nationwide.

“I have children about the same age. And the fact that they’re both White probably keeps them safer,” he said. “I don’t understand it fully because I never lived it. But I try to understand as best I can from what people have told me.”

Wallace’s death prompted widespread protests that devolved into unrest, including violence, looting and injuries to multiple police officers. Outlaw pledged reforms that include de-escalation training and coordination between department and mental health specialists.

Johnson said the Wallace family is not calling for the police officers who fired the fatal shots to be charged with murder.

“And here’s why, here’s why: They were improperly trained and did not have the proper equipment by which to effectuate their job,” he said.

Embiid, Simmons to miss All-Star Game; Zion to start instead

Embiid, Simmons to miss All-Star Game; Zion to start instead