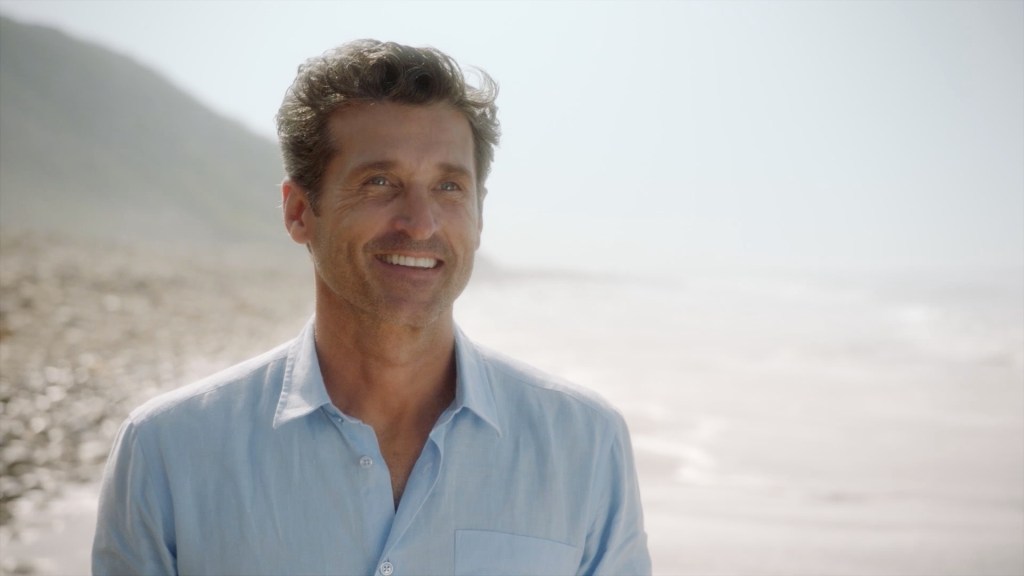 Days after his character’s surprise appearance in the Season 17 premiere of Grey’s Anatomy, Patrick Dempsey appeared on The Ellen DeGeneres Show to talk about his return to the ABC medical drama.

Derek, who died tragically five and a half years go, came back in a beach dream Meredith (Ellen Pompeo) slipped into after collapsing in the parking lot of Grey Sloan Memorial.

Speaking with Deadline about the premiere last week, Grey’s Anatomy showrunner Krista Vernoff would not say whether Meredith was OK, and if the collapse was a result of her just being overworked or was it something serious, like COVID, since she has been working almost exclusively with COVID patients.

The promo for this week’s episode (you can watch it below) features Meredith in a hospital bed being tended to by colleagues in full PPE as she is struggling to breathe.

In answering DeGeneres’ question about how his secret cameo came about, Dempsey confirmed Meredith’s COVID diagnosis.

He spoke about how he and Pompeo got together in July and brainstormed what they could do to make people wear masks, musing about “how great it would be for the fans to see everyone reunited in this sort of bizarre way” when Pompeo suggested that he returned to the show.

“And to the credit of the writers, Krista came up with this great idea where I will come and visit her in her COVID dream,” Dempsey said.

He also provided more information about how long his character will stick around, and it is great news for Meredith-Derek fans. In last week’s interview with Deadline, Dempsey said that he enjoyed the reunion in the premiere and was game for more episodes, while Vernoff said about Dempsey’s presence on the show this season, “it’s more than the one scene you saw” in the premiere. Derek’s presence will be fairly extensive, Dempsey revealed on Ellen.

Asked by DeGeneres how many more episodes he will be in this season, Dempsey said, “I’m not sure how many. I know I’m throughout this season, he comes back to visit.”

And that is OK by Dempsey who likes playing a vision that brings Meredith joy and peace.

“There are so many souls that we have lost right now so the idea of having angels around us is very comforting, at least to me,” he said.

Here is Dempsey’s Ellen interview, followed by the promo for this week’s Grey’s Anatomy episode.