As railcar lessor GATX (NYSE: GATX) looks at the second half of this year, there are three prominent factors that could put pressure on the company’s lease rates, renewal activity and asset utilization.

Those factors are a potential second wave of the coronavirus pandemic in the U.S., economic uncertainty both in the U.S. and abroad, and an overabundance of railcars currently in the market, executives said during the company’s second-quarter earnings call on Tuesday, July 21.

“We need to see that spigot dialed back. That will also help lease rates going forward,” said Bob Lyons, president of Rail North America for GATX. Lyons also listed an increase in rail traffic, as well as growth in industrial activity in North America, as other factors that could help lease rates move higher.

The existing economic environment and a possible second wave of the COVID-19 pandemic are making it difficult to determine when the lease rate environment for railcars will hit bottom, even though there has been sequential improvement in rail volumes in recent weeks, according to Lyons.

But the “oversupplied” railcar leasing market that existed before the pandemic is also exacerbating the issue of low lease rates, according to Lyons.

Despite the challenges in the railcar leasing and manufacturing sector, there is still interest among investors to acquire portfolios of railcars, with portfolio sizes ranging from 500-2,000 railcars to 5,000-20,000 railcars, Lyons said. GATX earlier this spring expressed interest in acquiring additional railcars.

But economic uncertainty is one of the factors that could be holding back acquisition activity in the sector, even though some investors have “excellent access” to capital, GATX executives said.

Net income from discontinued operations was $2.3 million, or $0.06 per diluted share, compared with $7.7 million, or $0.21 per diluted share, for the second quarter of 2019. These figures include financial results from the American Steamship Company. The American Steamship Company was previously one of GATX’s segments, but GATX completed the sale of the company on May 14 for $260 million. 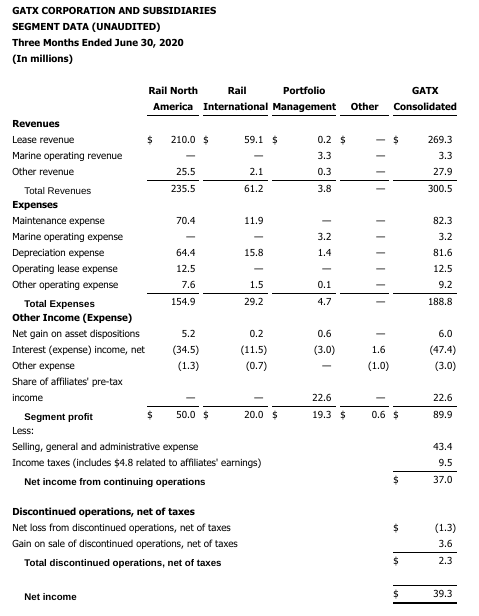 GATX’s North American segment reported a net profit of $50 million in the second quarter, down from $85.8 million a year ago. The company attributed the lower profit on lower gains from asset dispositions.

The North American fleet consists of approximately 117,800 railcars, including about 15,000 boxcars.

“In the second quarter, COVID-19 and its effect on the global economy negatively impacted all of our business segments,” said Brian A. Kenney, president and CEO of GATX, in a release. “Despite the difficult business conditions, our Rail North America team continued to effectively deploy railcars on lease and displace competitors, resulting in a renewal success rate of 71.8% and fleet utilization of 98.7% at quarter-end. However, as customers right-size their fleets, railcar lessors are competing aggressively to place both new deliveries and their existing idle railcars, resulting in significant pressure on lease rates.”

Meanwhile, second-quarter profit for GATX’s international segment totaled $20 million, down from $21.3 million in the second quarter of 2019.

More railcars on lease helped prop up profits, while changes in foreign currency exchange rates “negatively impacted” profits. Railcar utilization was relatively flat, at 98.4% in the second quarter compared with 98.5% a year ago.

GATX Rail Europe’s fleet consisted of approximately 25,700 railcars by the end of the second quarter. 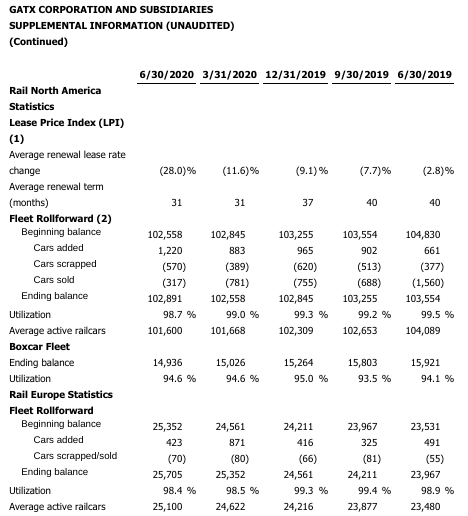