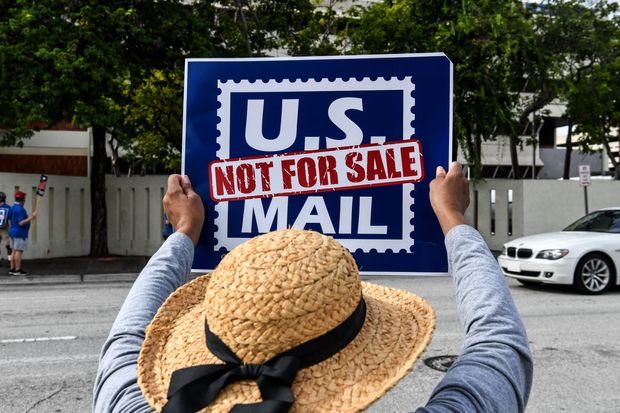 Newly appointed Postmaster General Louis DeJoy has thrown himself into a new agenda for the U.S. Postal Service, one that aligns quite nicely with Wall Street and its ideological allies. But there’s a better way, and that’s to turn the postal service into a hub for services that communities need but can’t get.

The Trump administration’s privatization blueprint starts with service cuts and price hikes, and ends in selling off profitable products to the private sector and de facto abandoning the post office’s mandate to serve everyone.

The logical outcome of the Trump administration’s approach is the exclusion of rural and tribal communities from postal routes that are no longer profitable.

It’s an agenda that Wall Street appears to like. On news that DeJoy would not be requesting emergency funds for the Postal Service, but cutting services instead, UPS UPS, +0.86% and FedEx FDX, +0.14% stock went through the roof. It was revealed last month that JP Morgan Chase JPM, -3.11%, the nation’s largest bank, is in talks with the USPS on an exclusive contract to locate Chase branches and ATMs in post offices.

There is simply no reason to sacrifice the USPS to the whims of the market: it’s a service, not a business. The fact that the Constitution itself empowers universal postal service suggests the founders of this country had more in mind than money.

But what exactly? The Postal Service is in a unique position of having over 33,000 locations across the country, often in urban and rural ZIP Codes without a single bank branch. Trust in the agency runs deep: 91% of Americans view the USPS favorably. It has long provided a pathway to the middle class for Black Americans, who faced discrimination in the private labor market.

If Congress rolled back artificial barriers that hamper USPS—notably the highly unusual requirement that it prefund the retirement benefits of postal workers who aren’t even born yet—the agency would be well-placed to deliver services beyond the mail.

A bank in every neighborhood

Take banking. One in four American households is unbanked or underbanked, and banking-while-poor is expensive; underserved Americans now spend twice as much money on fees and interest each year ($173 billion) than the federal budget for the food stamps program, often on alternative financial services such as payday lenders, title lenders, and check cashers.

The big Wall Street banks that do serve low-income households often only consider them acceptable customers if they can charge fees.

A version of postal banking that’s gaining traction would have the Federal Reserve provide regular people with the same no-fee high-interest accounts that it now reserves for commercial banks, with the Postal Service serving as a system of brick-and-mortar branches. This plan won support from Democratic presidential nominee Joe Biden and Sen. Bernie Sanders.

Postal banking is just the start.

These ideas are neither new nor are they radical. In the case of postal banking, we’d be restoring an institution that thrived in this country from 1911-67, which only shuttered as a result of the lobbying power of the big private banks. Countries including France, Japan, Germany, Korea, and Taiwan all have postal banking. Other ideas, such as partnering with the Census Bureau or state fish and wildlife agencies to make government services more accessible, are simply the right thing to do.

The brightest future for the Post Office does not lead down Wall Street. It leads down the road toward solutions for problems that real people face each and every day. It’s time to start the journey.

John Leguizamo to boycott the Emmys over lack of Latinx representation:...

NerdWallet: The two things that are most likely wrecking your retirement...