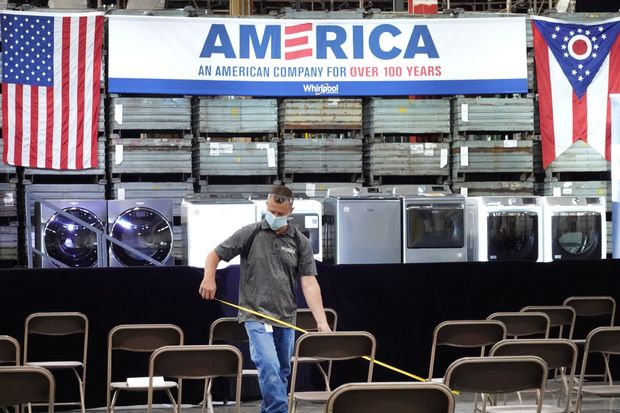 Both Democratic nominee Joe Biden and President Donald Trump are campaigning on a “Made in America” message, promising that their tax policies will help revitalize American manufacturing and bring jobs back from overseas.

But Biden and Trump’s convoluted new tax policy ideas are unlikely to deliver the promised results. Neither candidate’s plan would fix the issues in the current tax code that prevent companies from investing in the United States in the first place—and in some cases, they would make things worse.

Biden’s overarching tax policy vision is imposing higher taxes on businesses—a position which will certainly undermine the limited incentives he recently announced for businesses that invest in “revitalizing closed or nearly closed facilities, retooling or expanding facilities, and bringing production or service jobs back to the U.S. and creating U.S. jobs.”

Some of Biden’s higher business taxes include raising the corporate tax rate from 21% to 28%, applying a 15% minimum tax based on profits reported on financial statements, instituting a 10% surtax on services and sales to U.S. customers from a U.S. company’s foreign affiliate, and changing the minimum tax policy that the U.S. applies to foreign profits of U.S. companies.

The net effect of the Biden tax increases will likely outweigh any positive effect of his limited, 10% “Made in America” tax credit—in other words, Biden is likely to move the tax policy calculus in the opposite direction, away from more investment in the United States.

Trump’s tax plan is much lighter on detail. He, like Biden, proposes a “Made in America” tax credit as well as “Tax Credits for Companies that Bring Back Jobs from China” and “100% Expensing Deductions for Essential Industries like Pharmaceuticals and Robotics who Bring Back their Manufacturing to the United States.”

The president has also mentioned the potential of imposing tariffs on companies that do not move jobs back to the United States from overseas.

While both candidates dream up new “carrot-and-stick” regimes that, in practice, would be incredibly complex to design, let alone enforce, a simpler solution hides in plain sight: end the disincentives for business investment that currently exist in the U.S. tax code.

Generally, when a business has an expense, it can deduct that expense on its tax return in the same year. But for many types of capital expenses, businesses have to stretch those costs out over time periods that range up to 39 years. The result, when we account for inflation and the time value of money, is that the U.S. tax code does not allow businesses to deduct the full cost of their capital investments.

This inability to fully deduct capital expenses is effectively a  “factory tax,” imposing a needless barrier for capital formation in the United States that stands in the way of the “Made in America” revitalization both candidates aim to promote.

Whatever we call it, tax policy under current law can hinder private investment and thus create a drag on innovation, productivity, employment, wage growth, and economic growth. Over the next few years, this treatment is scheduled to worsen as provisions that let businesses immediately deduct their research and development expenses and machinery and equipment investments end.

Instead of promising limited tax credits that are inefficient at best, the candidates should seize on the opportunity to improve cost recovery treatment across all sectors and all investments.

Not only is this a proven strategy for boosting investment, it would be easier to administer and more neutral than trying to pick winners and losers by applying selective provisions in a piecemeal fashion across favored industries or types of investment.

Ultimately, any policy proposal that falls short of full cost recovery will leave tax policy hurdles standing in the way of investment and reduce the likelihood that either candidate will deliver on their promises.

Now read: How a President Biden or a President Trump could affect the student-debt crisis and college affordability

Erica York is an economist at the nonpartisan Tax Foundation in Washington, D.C. Follow her on Twitter @ericadyork.