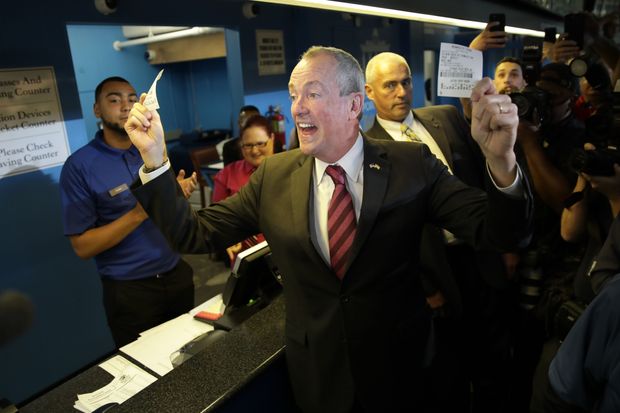 New Jersey Gov. Phil Murphy arrives to place a bet at the Monmouth Park Sports Book on the first day of legal sports betting in the state, in Monmouth, New Jersey.

ATLANTIC CITY, N.J. (AP) — New Jersey gamblers set a nationwide record for the most money bet on sports in a single month, plunking down almost $668 million in August on events including resurgent baseball, basketball and hockey seasons that had been interrupted by the coronavirus outbreak, figures released Monday showed.

See also: DraftKings and Caesars Entertainment stocks surge after news of an exclusive deal with ESPN

The extra money helped cushion the blow of months of losses incurred by New Jersey’s casinos and two racetracks that offer sports betting, helping them start to rebound financially.

The state Division of Gaming Enforcement shows the casinos and tracks collectively won $326.3 million from gamblers in August.

That figure was heartening to the casinos because it came in a month where they were restricted to operating at 25% of capacity, and it also included a doubling of internet gambling revenue compared to a year ago.

All told, the casinos and tracks saw their revenue decline by only 7.5% compared to August 2019, when they were going full-blast and there was no pandemic.

“Recovery is underway, even with continuing travel advisories that decreased visits from out of state,” said James Plousis, chairman of the New Jersey Casino Control Commission. “Atlantic City’s casino win was almost 70 percent of last August’s strong performance, although the months are not reasonably comparable because of restrictions on capacity, amenities, and entertainment.”

He also noted that indoor dining was allowed to resume on Sept. 4, a development which will presumably be felt in next month’s revenue report.

The biggest news was a record-setting performance by New Jersey’s sports betting industry. In addition to surpassing Nevada’s previous high, the $668 million wagered on sports in August surpassed the previous New Jersey record of $562 million set in Nov. 2019.

After paying off winning bets, the casinos and tracks reported $39.5 million in revenue on sports bets in August. It was the first full month of baseball this year, and gamblers also had hockey and basketball playoffs to bet on.

Internet gambling brought in $87.7 million, more than twice what it had a year earlier.

Only two casinos, Ocean Resort and the Golden Nugget, managed to post year-over-year revenue increases. Ocean was up 3.7% to $26.6 million, and Golden Nugget was up 2.5% to $37 million.

“Our year-over-year gaming revenue increase is a testament to the momentum Ocean created prior to the closure, which immediately resumed upon reopening in July,” Terry Glebocki, Ocean’s CEO, said in a statement. “We are pleased with our August performance despite a less favorable calendar, ongoing restrictions on occupancy and the lack of indoor dining until early September.”

“We are pleased with the results from our first two months since reopening, as our strengths begin with Hard Rock’s industry leading ‘Safe & Sound’ protocols, providing good, clean fun within our destination for visitors,” Hard Rock president Joe Lupo said in a statement.

Two internet-only entities did well in August. Resorts Digital was up over 97% to $27.9 million, and Caesars Interactive NJ was up almost 87% to $9.2 million.

: Walmart aims for zero emissions by 2040

Flood Advisory issued September 21 at 9:23AM EDT by NWS

The UFC's best nicknames and the stories behind them

Currencies: Why Yoshihide Suga will struggle to hold down the Japanese...

IPO Report: IPO market gears up for busiest week since May...