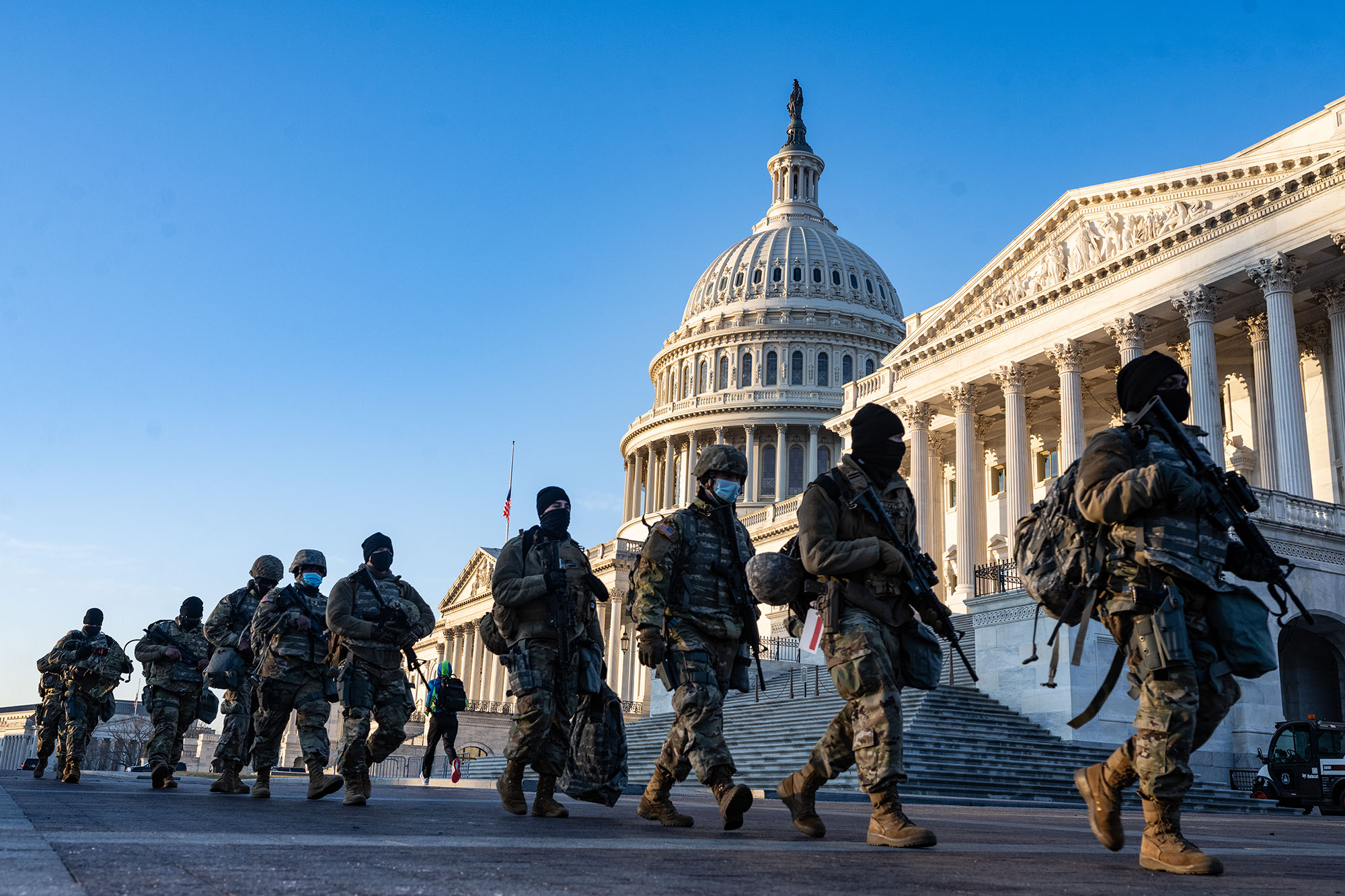 Members of the National Guard gather outside the U.S. Capitol on Jan. 13, 2021, in Washington, D.C. | Stephen Voss for POLITICO

More than 20,000 members of the National Guard could be stationed throughout Washington D.C. after federal officials authorized a 5,000 member increase, the city’s police chief said Wednesday.

“I think you can expect to see somewhere upwards beyond 20,000 members of the National Guard that will be here in the footprint of the District of Columbia,” acting Metropolitan Police Chief Robert Contee said at a news conference.

Contee cautioned that the final headcount is still under deliberation and will be determined in conjunction with the Secret Service. Still, the number is expected to be an order of magnitude beyond what was deployed prior to last week’s riots, which have led to dozens of arrests across the country after participants returned home.

Law enforcement and defense officials have been scrambling to respond to the enhanced security concerns surrounding next week’s presidential inauguration in light of the Jan. 6 riot that took over the U.S. Capitol and left a number of people dead or injured.

Earlier this week the Pentagon allowed National Guardsmen protecting the Capitol to carry lethal weapons in response to the credible threats of violence from militia and extremist groups. Prior to the riot, city and federal officials had deliberately sought to limit the military’s role in response to the protests.

An array of additional security measures have been installed both inside and outside of the Capitol building in response to the violent insurrection, and the new features come as Congress is in the process of impeaching outgoing President Donald Trump for his actions that day.

Scores of uniformed National Guard members filled the halls of the Capitol on Wednesday, adding a layer of surrealness to the day’s unprecedented proceedings. The House is on the verge of passing an article of impeachment against Trump later Wednesday, setting him up either for a Senate trial in the days before he is set to leave office or — more likely — shortly thereafter.

The security apparatus in the lead-up to Wednesday’s assault has come under heavy criticism from lawmakers and outside observers, as the police force charged with protecting the Capitol and other federal buildings failed to stop the large mob from storming the building and endangering hundreds of people — including Vice President Mike Pence.

At least two U.S. Capitol Police officers have been suspended, and several others are under investigation for their conduct during the riot. One officer was killed as a result of the insurrection, another died by suicide following the attack, and some other officers have reportedly threatened to harm themselves.