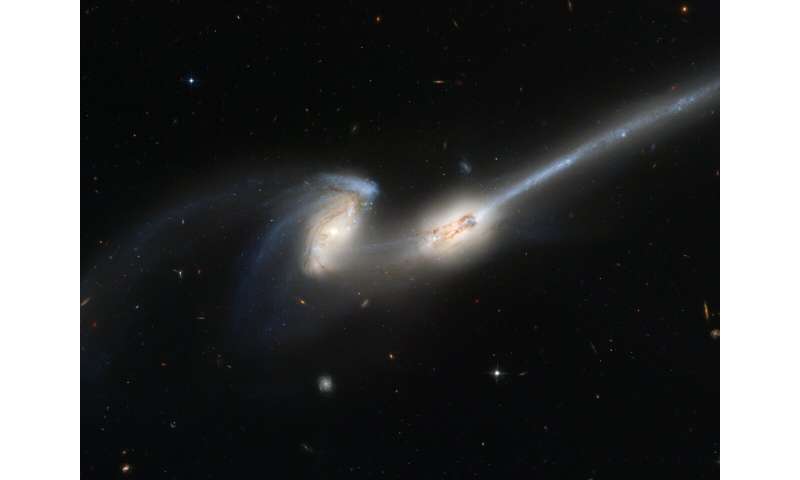 Active galactic nuclei (AGNs) play a major role in galaxy evolution. Astronomers from SRON and RuG have now used a record-setting sample of galaxies to confirm that galaxy mergers have a positive effect on igniting AGNs. They were able to compile about 10 times more pictures of merging galaxies than previous studies by using a machine-learning algorithm.

One of the bigger questions in astronomy is how galaxies evolve from clouds of gas and dust to the beautiful spiral structures observed in our galactic neighborhood. So-called active galactic nuclei (AGNs) comprise interesting research objects to answer part of the question, because there appears to be co-evolution between AGNs and galaxies. AGNs harbor supermassive black holes that emit huge amounts of energy after accreting gas from their surroundings. Some have large enough magnetic or gravitational fields to spit out jets from their poles stretching thousands of lightyears.

Co-evolution is a two-way street. On the one hand, the evolution stage of a galaxy affects AGN activity. AGNs seem to thrive at a certain stage in a galaxy’s evolution, because we see AGN activity peaking in galaxies at a particular distance, and therefore at a particular time in the past. On the other hand, AGN activity affects a galaxy’s star formation. This could go either way. An AGN’s jet pushes gas away as it propagates through the galaxy, forcing the gas to collide with other gas and thus creating clumps—seeds for baby stars. But AGNs also emit energy, heating up the gas and thus preventing it from cooling down and condensing into clumps. 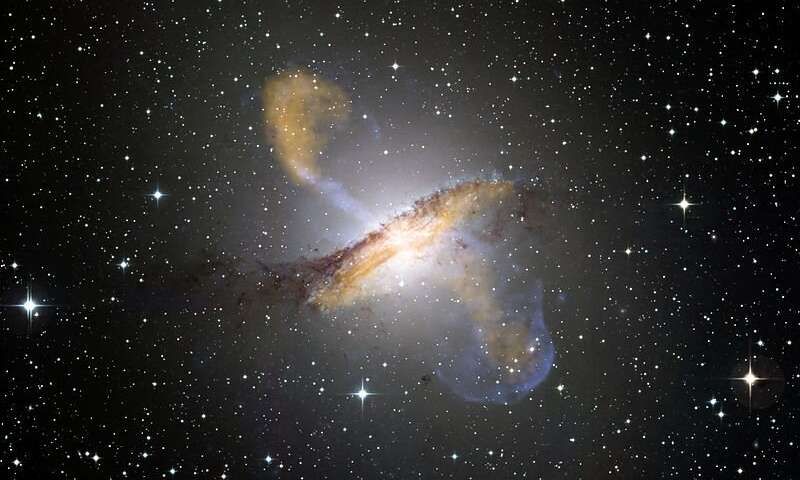 Astronomers from SRON Netherlands Institute for Space Research and the University of Groningen (RuG), including Lingyu Wang and Fangyou Gao, have now used a sample with a record-setting number of galaxies to study one of the factors believed to have a positive effect on igniting AGNs: mergers between galaxies. And indeed, the researchers found a correlation. They counted about 1.4 times more AGNs in mergers than in non-mergers. And the other way around, the researchers found about 1.3 times more mergers in samples of galaxies with an AGN compared to samples of galaxies without an AGN.

The research team used a machine-learning algorithm to recognize mergers. It provided a sample that is about an order of magnitude larger than those in previous studies, making the correlation much more reliable. “We have built a network to train the system to recognize mergers in a lot of pictures,” says first author Fangyou Gao. “This enables us to use a large sample of two telescope surveys with tens of thousands of galaxies. AGNs are relatively easy to recognize based on their spectrum. But mergers must be classified from images, which is typically a human’s job. With machine learning, we can now have computers do this for us.”

Citation: Mergers between galaxies trigger activity in their core (2020, May 29) retrieved 30 May 2020 from https://phys.org/news/2020-05-mergers-galaxies-trigger-core.html