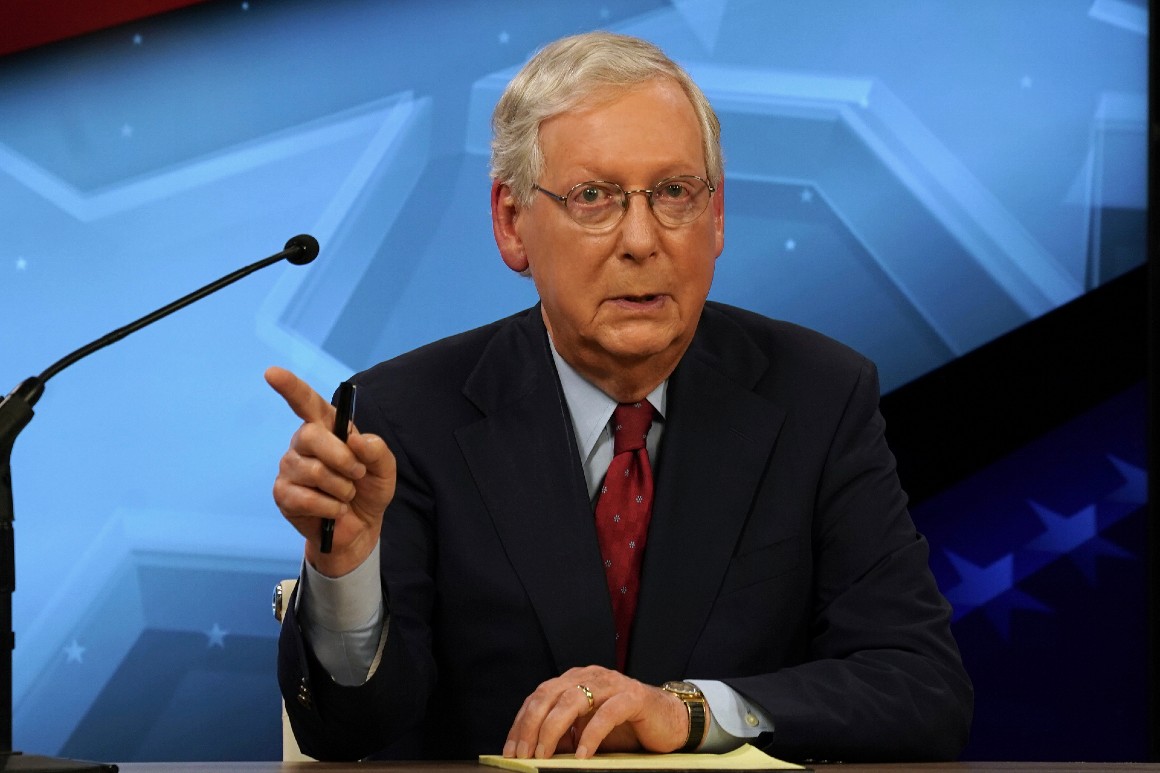 Senate Majority Leader Mitch McConnell announced Tuesday that the Senate will take one more shot at a “targeted” coronavirus relief bill before the election, an approach Democrats have repeatedly rejected as insufficient.

With President Donald Trump and his top aides urging the GOP to address the issue and replenish the Paycheck Protection Program for small businesses, McConnell (R-Ky.) is daring Democrats to block it again.

“Republicans do not agree that nothing is better than something for working families. The American people need Democrats to stop blocking bipartisan funding and let us replenish the PPP before more Americans lose their jobs needlessly,” McConnell said in a statement.

Speaking in Kentucky later Tuesday, McConnell said the GOP bill being taken up next week would offer more money for unemployment insurance and provide funding for schools and hospitals, in addition to funding PPP.

Democrats this week have attacked McConnell for prioritizing confirmation of Supreme Court nominee Amy Coney Barrett over coronavirus relief. The GOP has blamed Democrats for refusing to accept a smaller package than a sweeping coronavirus bill of several trillion dollars.

The Senate is expected to reconvene on Monday, barely two weeks before the election. But McConnell said the Senate would have time to consider both a coronavirus bill and Barrett’s nomination before the election “unless Democrats block this aid for workers.”

It’s not entirely clear if Democrats will allow debate on the bill, but they voted down a similar proposal in September. Speaker Nancy Pelosi has sought at least $2 trillion in funding for economic relief in negotiations with White House chief of staff Mark Meadows and Treasury Secretary Steven Mnuchin.

The White House presented its latest offer — $1.8 trillion — on Friday, though many Senate Republicans have bristled at the price tag. McConnell’s move towards a vote now suggests at least some effort to unite the GOP. Meadows and Mnuchin had requested the vote earlier this week.

Democratic leaders, meanwhile, have rejected the administration’s proposal, calling it inadequate to meet the demands of a nation still reeling from a devastating pandemic and the recession that has followed.

Speaking on a private caucus call on Tuesday, Pelosi forcefully dismissed the $1.8 trillion plan, arguing that Democrats need to hold out for a better deal or risk shortchanging key priorities.

“We need an agreement, but we cannot get an agreement just by folding. Our leverage has never been greater,” Pelosi told her members, according to several sources on the call.

Pelosi has come under some pressure from rank and file Democrats in recent days to accept the GOP offer, which several lawmakers say is better than nothing and could help clear the deck for an ambitious agenda by a potential President Joe Biden next year. That includes dozens of moderates in swing-districts, as well as some progressives such as Rep. Ro Khanna (D-Calif.), who tweeted support for the GOP’s $1.8 trillion offer over the weekend.

“People in need can’t wait until February,” Khanna wrote on Twitter, calling the GOP’s proposal “significant” and “more than twice” the size of the 2008 stimulus under President Barack Obama.

But Pelosi has remained firm, and has marshaled support from across her leadership team — releasing statements opposing the GOP offer from eight of her Democratic chairs. At one point on Tuesday’s call, Pelosi referenced Trump’s calls to his own party to “go big or go home!!!” which he had tweeted earlier that day.

“So that’s what we should do,” Pelosi said.

Trump getting support from those most affected by 'asymmetrical' COVID lockdowns:...