The world’s most prominent digital currency on Wednesday was back to carving out records just like it was 2017. The No. 1 crypto’s nearly 11.7% weekly rise and 34% gain so far in November has helped the asset hit a market value of around $334 billion, according to digital-currency data site CoinMarketCap.

Read: He accurately called bitcoin’s near-term surge to $16,000, but now sees chance of a 20% tumble 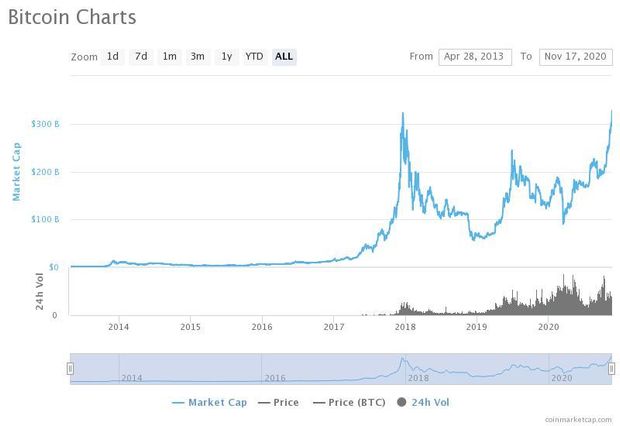 Although bitcoin’s price BTCUSD, +2.48% BTCUSD, +2.48% hasn’t exceeded that 2017 record level, it currently sits about 10% shy of touching a round-number milestone at $20,000. It quietly has been drawing more attention and notching a fresh all-time peak for an asset considered one of the most polarizing of this generation of financial markets.

Bitcoin’s record market capitalization reflects the attention that the blockchain-based asset has garnered over its rivals.

So-called bitcoin dominance, or the share of bitcoin’s value as it contributes to the universe of recognized digital currencies, was at 66.5%, as tracked by CoinMarketCap. Bitcoin’s market-cap dominance is near to its highest level since May of 2020.

Bitcoin and other cryptos were boosted last month after PayPal Holdings Inc.  PYPL, +0.18%   said it would allow customers to buy cryptocurrency through their accounts and use it for merchant payments.

Still, bitcoin bears and detractors aren’t hard to find. On Tuesday, Ray Dalio, the founder of Bridgewater Associates, the world’s largest hedge fund, and a longtime bitcoin skeptic, on Twitter challenged proponents of the currency to explain to him why bitcoin is worth his attention and not doomed to collapse.