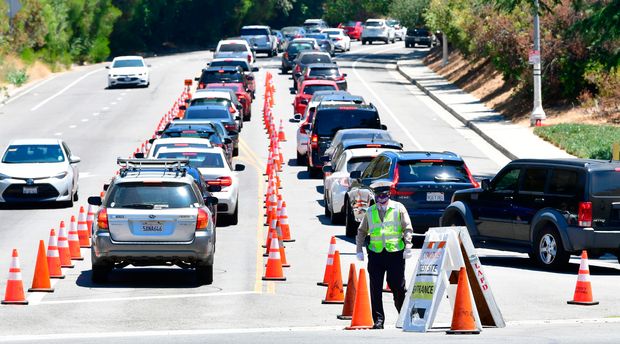 Cars line up at a COVID-19 test site at Dodger Stadium in Los Angeles.

Consumers struggling to keep up with their auto debts filed a record number of complaints with a key federal consumer watchdog agency in the first five months of the pandemic, according to a new analysis of government data released Wednesday.

The report found that the Consumer Financial Protection Bureau received 2,844 complaints by borrowers, or pleas for help, on auto-related disputes from March to July, the highest of any five-month period since the CFPB started collecting consumer complaints in 2012.

The complaints showed borrowers have been hard-hit by COVID-19 after a booming decade for auto financing, but also pointed to a potentially bigger crisis brewing in the months since auto debt relief was left out of the $2 trillion Cares Act passed by Congress in March.

“In the first months of the pandemic, many auto lenders have offered relief programs to their customers. But without federal requirements for relief programs, those programs have been inconsistent,” wrote the report’s co-authors, a team from the U.S. PIRG Education Fund and its research affiliate Frontier Group.

What’s more, auto debt complaints were piling up even as many households received one-time $1,200 stimulus checks and before $600 a week in additional unemployment benefits expired at the end of July.

While the report said earlier relief efforts “prevented or at least delayed a massive wave of automobile delinquencies and repossessions,” it also warned that “strains caused by COVID-19 threaten to turn a situation that is already damaging to many consumers into a full-blown crisis.”

After all, there’s already a record $1.3 trillion of auto debt outstanding in the U.S., or an 85% increase since 2009, and a bustling subprime auto lending industry.

This chart shows that a key complaint to the CFBP since March has been about lenders denying borrower requests to lower their debt payments during the pandemic. 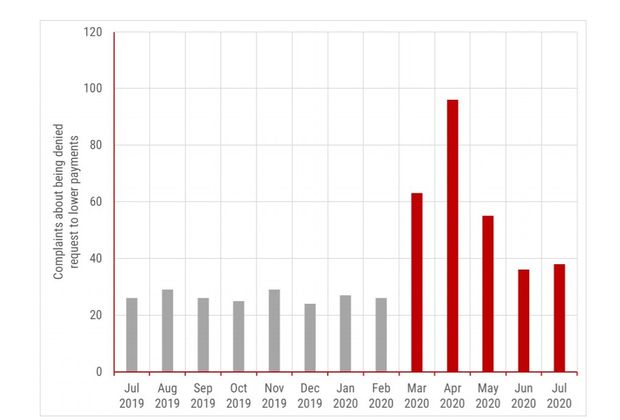 Congress and the White House have been deadlocked for months over providing households, businesses and states with another significant round of pandemic aid.

Senate Majority Leader Mitch McConnell said Tuesday that he intends to give Democrats another chance to help pass a piecemeal fiscal stimulus package, by trying to bring to the Senate floor a $500 billion plan next week. House Speaker Nancy Pelosi wants a more sweeping $2.2 trillion package.

That standoff comes as more than 100 million Americans owe money on their cars, or nearly one in three U.S. borrowers.

The report details how many of the same auto companies that have been the subject of the most consumer complaints also received prior CFPB enforcement actions relating to auto lending.

The companies didn’t immediately respond to requests for comment for this article.

“The CFPB database reveals the dark side of the auto lending boom and hints at the major challenges facing consumers during the continuing pandemic,” the co-authors wrote.