The LSU Tigers football program has come under fire this week after a bombshell report alleged that the school didn’t do enough to address sexual misconduct allegations against two football players.

Former players Derrius Guice and Drake Davis are among at least nine LSU football players that were reported to police for sexual misconduct and dating violence since coach Ed Orgeron took over the team, USA Today reported Monday.

Guice was later drafted by the Washington Football Team only to later be suspended and released after the sexual assault allegations came to light. Davis was suspended and later expelled by the university, but the USA Today report said that Davis abused his then-girlfriend multiple times.

Another player, Peter Parrish, was suspended for a year after being accused of rape and then transferred to Memphis. Tae Provens, Jacob Phillips, Zach Sheffer, and current Cleveland Browns safety Grant Delpit were all named in the USA Today report as having been accused of sexual misconduct but discipline against them fell by the wayside. 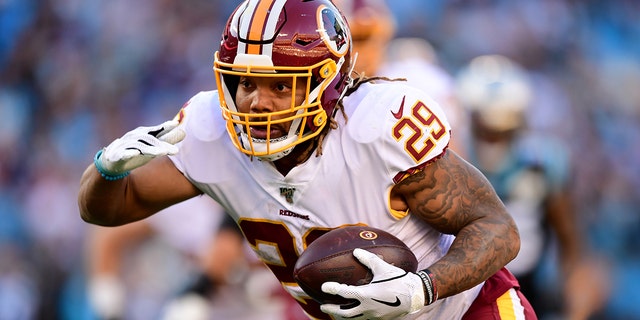 Derrius Guice was released by Washington after a domestic violence incident. (Photo by Jacob Kupferman/Getty Images)

Provens, Phillips, and Sheffer were reportedly accused of rape while Delpit was accused of sharing a video of a woman without her knowledge, something which the former LSU defensive back’s attorney Shawn Holley denied.

The report also described several examples in which LSU declined to give requested information to the media and to the victims.

The allegations were reportedly made between 2015 and 2018.

EX-WASHINGTON RUNNING BACK DERRIUS GUICE ACCUSED OF CHOKING GIRLFRIEND ‘UNTIL SHE WAS UNCONSCIOUS’: REPORT

“We need to support and protect victims of violence, sexual abuse of any kind,” he said. “There’s no place in our society nor on this campus or on our football program for any behavior of this type.

“When accusations are made, we have a legal and moral obligation to report every allegation to the university’s Title IX office so due process can be implemented. I have in the past, and will continue to take appropriate action and comply with reporting protocol.” 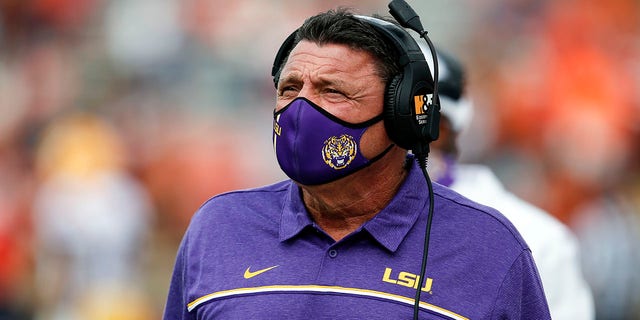 According to USA Today, there was “no evidence” co-coach Julia Sell or her husband Mike Sell made any attempt to inform anyone about the allegations, only telling police they learned about it a year later.

“The LSU Women’s Tennis coach, Julia Sell, released a statement claiming she had no knowledge of the allegations made by my teammate and I,” she wrote on Twitter. “The statement is a blatant lie. Four members of the LSU Tennis Team separately made Coach Sell aware of these events between May 2017 and August 2018. These women would be willing to confirm this information and corroborate my story, as one already has in the USA Today article. Additionally, my parents called during that time span to express their concern, and my coaches brushed them off. Lastly, I would like to add that during the criminal case regarding the allegations I made, Coach Sell instructed the tennis team to stay away from me. These were my teammates and closest friends at the time, and I needed their support.

“I was betrayed by Coach Sell, and I will not stand by and allow her to deny knowledge of what I went through, when in reality she knew the full truth and simply chose to stand by. As details of the sexual misconduct within LSU continue to come to light, my hope is that LSU Athletics changes course and decides to be transparent and remorseful rather than continuing to create cover-ups and false narratives.”

Julia Sell, who is the co-coach with her husband Mike, released a statement denying knowledge of the allegations.

“A recent story by USA Today suggests that Mike and I failed to report allegations of dating violence disclosed to us by a parent and former player,” she wrote on Twitter. “That suggestion is false, as such allegations were never disclosed to us. Furthermore, we would never dismiss or doubt any such allegations. We have in the past and will continue to take appropriate action and comply with all reporting protocols. All victims must be heard and supported, and we pledge to stand with them to help end all forms of sexual and domestic abuse.”

Julia Sell had come under fire in a previous USA Today report detailing the allegations against Guice in August but he still remained with the team.

Kenny Jacoby, who was one of three bylines on the USA Today report, told ESPN’s “Dan Le Batard with Stugotz” that the story is far from finished.