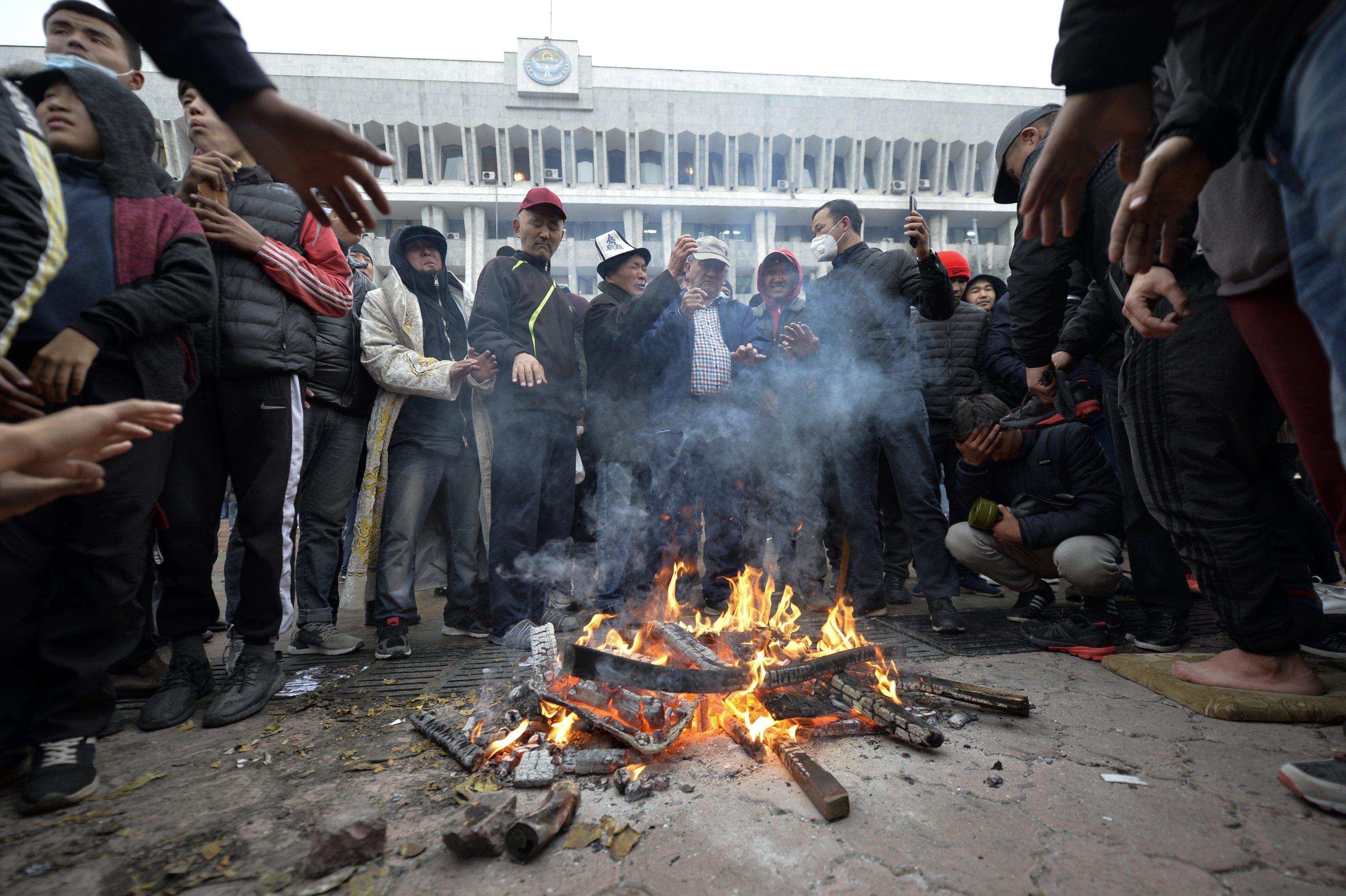 MOSCOW (AP) — Officials in Kyrgyzstan on Tuesday nullified the results of a weekend parliamentary election after mass protests erupted in the capital of Bishkek and other cities, with opposition supporters seizing government buildings overnight and demanding a new vote.

Hundreds were injured, and one person was killed. Members of several opposition parties announced plans to oust the president and form a new government.

The decision to cancel the results of Sunday’s vote was made in order to “prevent tension” in the Central Asian country, Central Election Commission head Nurzhan Shaildabekova told the Interfax news agency.

Protests in Bishkek and elsewhere broke out after authorities announced early returns in favor of two parties, one of which is said be closely aligned with President Sooronbai Jeenbekov and another linked to a former top customs official, amid reports of vote-buying and other election fraud in Kyrgyzstan, one of the poorest countries to emerge from the former Soviet Union.

Supporters of a dozen opposition parties took to the streets Monday, demanding a new election. Police dispersed the crowds with water cannons, tear gas and flash grenades. About 590 people were injured and one person was killed in the unrest, the Interfax news agency reported, citing Kyrgyzstan’s Health Ministry.

The violent crackdown failed to halt the unrest, however, and protesters broke into the government complex that houses both the parliament and the president’s office. Interfax reported that opposition supporters also took control of Bishkek’s City Hall.

Other protesters went to Kyrgyzstan’s State Committee of National Security, demanding to free former President Almazbek Atambayev, who was convicted on corruption charges earlier this year and sentenced to 11 years and two months in prison. Security officers freed Atambayev after negotiations with the protesters.

“We intend to seek the dismissal of Sooronbai Jeenbekov from his post,” Maksat Mamytkanov, a member of the Chon Kazat party, told Interfax, adding that opposition parties also insist on adopting a new constitution.

Zhanar Akayev of the Ata Meken opposition party was quoted by the Kyrgyz service of Radio Free Europe/Radio Liberty as saying that “a new prime minister and the people’s government need to be appointed,” and then “a popular election” needs to be held.

Jeenbekov on Tuesday urged leaders of opposition parties to “calm their supporters down and take them away” from the streets.

“I call on all (political) forces to put the fate of the country above their political ambitions and return to (acting) within the law,” Jeenbekov said.

Several opposition parties formed what they called a coordination council to facilitate a transition of power, while several others refused to recognize the council as a legitimate body representing the opposition.

The mayors of Bishkek and Jalal-Abad, the country’s third-largest city, resigned. The country’s Finance Ministry issued a statement on its website, saying that it “recognized the power of the people” and halted all of its financial operations “until further notice from the legitimate authorities.”

Parliament announced an emergency session to discuss the crisis, but it wasn’t immediately clear in what format it actually took place. Local media reported that lawmakers failed to get a quorum for a session, but a few dozen of them gathered nonetheless and discussed appointing new officials to some top government posts.