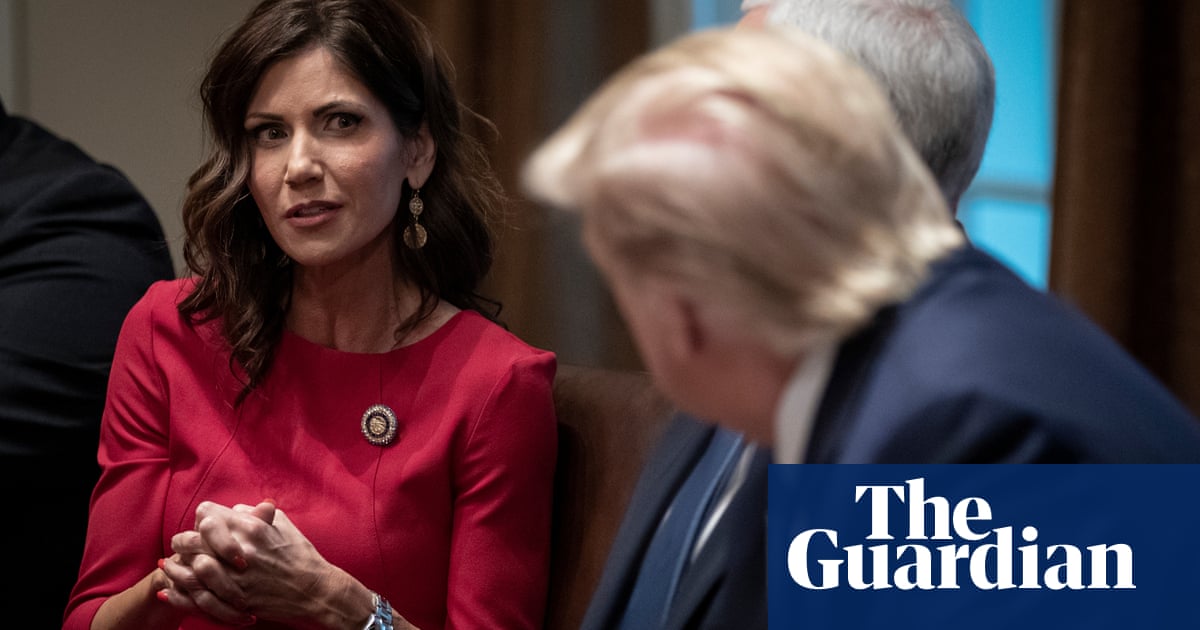 Kristi Noem, the Republican governor of South Dakota, tells a story about the first time she met Donald Trump. He welcomed her to the Oval Office, and after they shook hands she returned the compliment by inviting him to visit her back in her home state.

“We have Mount Rushmore,” she said, hoping he would be tempted by a trip to the famous rock sculpture depicting four of his presidential predecessors. Trump replied: “Do you know, it’s my dream to have my face on Mount Rushmore?”

“I started laughing,” Noem recalls. “He wasn’t laughing, so he was totally serious.”

Noem, 48, is savvy enough to know when to humor a potential patron. In July, Trump did make the trip to Mount Rushmore on 4 July for an Independence Day fireworks display. To mark the occasion, she presented him with a four-foot model of the granite monument complete with the addition of a fifth president – Trump.

Having lost to Joe Biden in the election, Donald Trump has as much chance of being carved next to Abraham Lincoln on Mount Rushmore as Donald Duck. But since Trump’s defeat, Noem has still clung to the president and to his policies as though her political life depends on it.

The actual lives of many South Dakotans could depend, in turn, upon that decision given the terrifying surge of Covid-19 cases that is battering the state under Noem’s contentious leadership. South Dakota has been listed by Forbes as one of the 10 most dangerous states in the Union, all of them in the Midwest.

Coronavirus in South Dakota is running at an intensity only surpassed in the US by its neighbor North Dakota. The state has an alarming positivity rate of almost 60% – nearly six out of 10 people who take a Covid test are infected – second only to another neighbor, Wyoming.

Viewed through the lens of cases and deaths, South Dakota is also at the top of the league table. More than 66,000 South Dakotans have contracted the disease and at least 644 have died, a number likely to rise as hospitals reach breaking point.

Amid this devastating contagion, Noem is rigidly sticking to the strategy she has adopted since the pandemic began. It consists of a refusal to accept mask mandates and repeated denial of the science around the efficacy of wearing masks; resistance to imposing any restrictions on bars and restaurants; no limits on gatherings in churches or other places of worship; and no orders to stay at home.

While the statistics are clear – the virus is running wild in South Dakota – Noem has turned a public health emergency into an issue of “freedom” and “liberty”, consistently lying about the trajectory of the disease under her watch. “We’re doing really good in South Dakota. We’re managing Covid-19,” she has said.

She has also embraced the malaria drug hydroxychloroquine as a treatment for Covid, even after it was proven to be ineffective and potentially dangerous.

If all of this sounds familiar, that’s because it is. Since the start of the pandemic, Noem has consciously adopted the posture of a mini-Trump, following the president’s every move in the handling of the health crisis.

“From the get-go, her approach was mirroring the Trump administration,” said Lisa Hager, a political scientist at South Dakota State University. “She’s been adamant about people making their own choices and that it’s not the government’s role to step in – and it has played very well for her in her political career.”

The more Noem championed the Trump line – downplaying the virus, turning her back on the science, failing to put in place even basic public health measures to contain the disease – the higher her star rose within the Republican firmament. One of her first acts as governor was to install a TV studio in her office for use in live interviews, a smart move given her frequent appearances in recent months on Fox News.

Her growing stature in Trump World attracted the attention last year of Corey Lewandowski, the pugnacious former campaign manager of Trump’s first presidential campaign in 2016. Lewandowski took Noem under his wing and spirited her away on a whirlwind tour of Trump campaign events this year, introducing her to Maga supporters across the country.

“Lewandowski has been coaching her on how to foment conflict to get attention,” said Cory Allen Heidelberger, who writes the liberal blog Dakota Free Press. “He tells her, conflict is attention, attention is influence – so just create conflict wherever you can.”

Noem can certainly claim to be an A-grade student when it comes to generating conflict. The 4 July Mount Rushmore event was one of two huge public gatherings that she blessed against the advice of health experts.

The other was the Sturgis Motorcycle Rally which Noem actively welcomed. The gathering attracted almost 500,000 people over 10 days and is now widely thought to have been the mother of all super-spreader events that helped trigger the Covid disaster that the midwest is now suffering.

Even as the crisis has exploded around her, she has stuck to her guns and led by her maskless example. Last week she attended a high school football championship in an indoor sports dome in which masks were required for everyone present – she violated the rule and went ostentatiously bare-faced.

There are two possible reasons why Noem continues to stick to Trump’s Covid playbook, even after he was relegated into the position of a lame-duck president. Unlike other parts of the country, Trump’s backing in South Dakota has remained steadfast since 2016 at 62% of the electorate, forcing her to remain on good terms with Trump supporters should she want to run for a second term as governor in two years’ time.

A more likely explanation though lies with her growing national platform. Apart from cultivating her profile on Fox News and at Trump rallies around the country, Noem has surrounded herself with a coterie of staffers drawn from Beltway strategists and lobbyists.

“The reason you do that has nothing to do with governing South Dakota,” Heidelberger said. “She’s completely focused on the national scene.”

Trump himself will be turfed out of the White House – quite possibly, kicking and screaming – on 20 January. But Trumpism will remain alive and well in its redoubt in South Dakota, while the pandemic rages furiously around its governor’s serene and maskless head.

Uneven games by the Packers have exposed their flaws