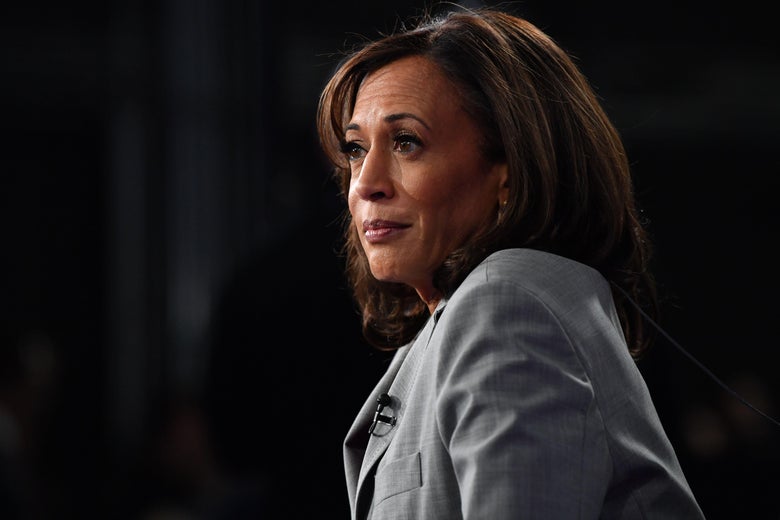 Democratic presidential hopeful California Senator Kamala Harris speaks to the press in the Spin Room after participating in the fifth Democratic primary debate of the 2020 presidential campaign season in Atlanta, Georgia on November 20, 2019.

Sen. Kamala Harris’ campaign is in deep trouble. The senator was once seen as one of the most promising contenders for the Democratic nomination. Now she seems stuck in the low single digits. And those who know how her campaign has been run don’t seem exactly surprised. The New York Times talked to “more than 50 current and former campaign staff members and allies” who described in detail how the campaign seems to have made one bad decision after another while failing to manage personnel very effectively.

The unhappiness within Harris’ team was evident in the resignation letter of Kelly Mehlenbacher, the campaign’s state operations director, in November. “This is my third presidential campaign and I have never seen an organization treat its staff so poorly,” Mehlenbacher wrote, criticizing the leaders of the campaign for laying off staffers without notice. She went on to say that “with less than 90 days until Iowa we still do not have a real plan to win.” Even though Mehlenbacher emphasized that she still thinks “Harris is the strongest candidate” for the general election, “I no longer have confidence in our campaign or its leadership.”

Many of those the Times spoke to seem to lay much of the blame for the current situation on two people: Maya Harris, the campaign chairwoman, and Juan Rodriguez, the campaign manager. Maya Harris is the senator’s sister so she often goes unchallenged and campaign adies say that it isn’t clear who is actually in charge. They also point the finger at Harris herself, noting that she often waffled and didn’t seem clear of where she wanted to go, never actually choosing a side in the liberals vs moderates battle that has come to dominate the Democratic contest.

It seems many people close to the senator have been upfront with her that she needs to shake things up. Rep. Marcia Fudge, who endorsed Harris, says she must fire Rodriguez. But at the same time, she acknowledged Harris herself was to blame for at least some of the problems within the campaign. “I have told her there needs to be a change,” Fudge said. “The weakness is at the top. And it’s clearly Juan. He needs to take responsibility — that’s where the buck stops.” Harris declined to be interviewed for the piece.

The Times piece followed another one by the Washington Post published on Thursday that described Harris’ campaign as “teetering,” claiming her candidacy was “weighed down by indecision within her campaign, her limits as a candidate and dwindling funds that have forced her to retreat in some places at a moment she expected to be surging.” The Post’s Chelsea Janes writes that part of the problem with Harris is that she has “often displayed a desire to be everything to everyone that has instead left voters with questions about who she is, what she believes and what her priorities and convictions would be as president.”

Readers like you make our work possible. Help us continue to provide the reporting, commentary and criticism you won’t find anywhere else.

Seattle bomb threat outside FBI headquarters is false alarm; 1 in...