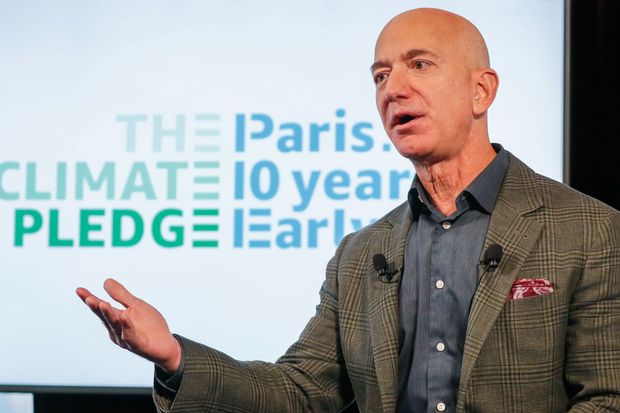 Amazon.com Inc. founder Jeff Bezos on Monday announced the inaugural round of recipients of the $10 billion Earth Fund that taps his personal fortune to fight the effects of man-made climate change, a looming global crisis that his critics say is aggravated by the size of the retail giant that made him a billionaire.

The first $791 million of the campaign announced in February will be released to 16 mostly established environmental concerns as Bezos looks to quiet the chorus of complaints that Amazon’s AMZN, +1.10% speedy package delivery has helped many Americans wait out COVID-19 lockdowns but creates a dangerous carbon footprint. Amazon said in June its carbon footprint rose 15% last year even as it launched initiatives to reduce its harm on the environment.

Additionally, critics charge that the site’s sometimes unvetted vendors across a vast network include mega polluters and engage in business practices that devastate carbon-capturing, biodiverse forests. Loss of biodiversity, which helps force humans and animals into contact , has been cited for creating public-health risks, including the latest coronavirus.

“ Grant recipients are ‘working on innovative, ambitious and needle-moving solutions’ to climate change. ”

Bezos’s Earth Fund pledges to help combat the effects of climate change through grants to scientists, activists and other organizations in their efforts to “preserve and protect the natural world.”

The top Earth Fund grants so far are earmarked for The Nature Conservancy, Natural Resources Defense Council, Environmental Defense Fund, World Resources Institute and the World Wildlife Fund, all long-established organizations that will each receive $100 million.

Bezos, who also owns the Washington Post, said in an Instagram post that he spent the past several months exploring the work of these recipients, adding they’re “working on innovative, ambitious and needle-moving solutions” to climate change.

Fred Krupp, president of the Environmental Defense Fund, said on Twitter the Bezos award and other funding will allow his organization “to cut methane pollution from the oil and gas industry by 45% by 2025, which will be the same 20-year benefit of closing a third of the world’s power plants.” EDF has been critical of the Amazon carbon footprint in the past.

The World Wildlife Fund has said it will use its $100 million award to protect and restore mangroves from “climate-accelerated weather events,” and to develop new markets for seaweed as an alternative to fossil fuel-based CL00, -0.46% products.

Bezos has a net worth variously estimated at between $100 billion and $130 billion, depending on the value of Amazon stock and his other assets. He was jeered on social media earlier this year for what was seen as a paltry $690,000 donation for Australian wildfire relief, a tragedy linked to climate-change extremes. Amazon shares are up 68% in the year so far.

Though he is the world’s wealthiest person, Bezos has been, until recently, relatively quiet about his philanthropic endeavors compared with his ultra-high-net-worth peers. He has not signed the Giving Pledge, the campaign created by Berkshire Hathaway CEO Warren Buffett and Microsoft cofounder Bill Gates in 2010 to encourage billionaires to promise to give away half their wealth either during their lifetimes or when they die.

MacKenzie Scott, the former wife of Bezos, signed the Giving Pledge after the couple divorced, and earlier this year announced that she had handed out $1.7 billion to organizations involved in improving racial and gender equity and economic mobility.

“ ‘Glad to see Jeff Bezos stepping up… but the vast majority is going to the usual D.C.-based, technocratic suspects.’ ”

— Mark Gunther of the Nonprofit Chronicles

Scott won praise  from some for making her grants without restrictions on the recipients and because some of her grantees were smaller, newer grassroots organizations.

In contrast, Bezos focused his climate change grantmaking on larger well-established nonprofits with long track records working on environmental causes. “Glad to see Jeff Bezos stepping up to curb #climate change — $791m is a ton of money for environmental groups — but the vast majority is going to the usual DC-based, technocratic suspects,” wrote Mark Gunther, author of the Nonprofit Chronicles blog .

At the time of the program’s announcement, Steve Freedman, senior product specialist in ESG at Geneva-based Pictet Asset Management, said he wanted to see an innovator like Bezos funnel his climate grants to green technology, including smarter engineered wood, scalable “clean” batteries that can be recycled and biodegradable plastic. Bezos has routinely crowd-sourced ideas for where to target his giving.

See also: 7 ways to cut the carbon footprint on your Amazon deliveries

Amazon, whose own employees have joined the chorus of climate-change critics, last year announced a goal to meet Paris Climate Agreement objectives 10 years early. It made a pledge to be carbon neutral by 2040, even for its Prime one-day shipping service. Amazon said then it will work toward using 100% renewable energy by 2030 and has placed a big order for electric vans.

Special Weather Statement issued November 23 at 2:05AM EST by NWS